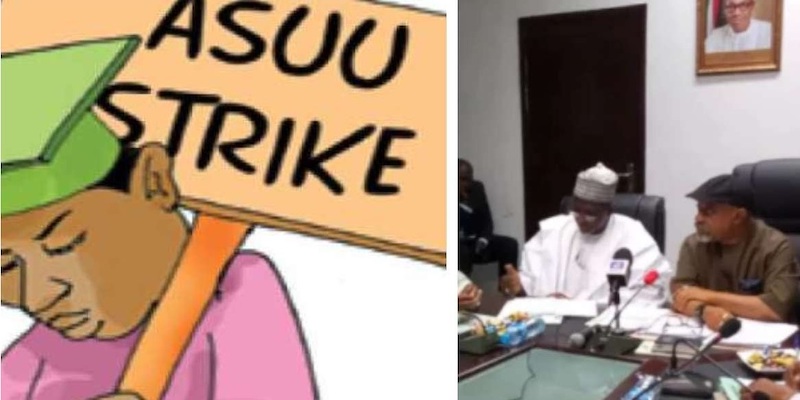 The striking members of the Academic Staff Union of Universities (ASUU), yesterday approached the Court of Appeal, Abuja for an order to stay the execution of a court judgement ordering it to end its ongoing nationwide strike.
The university teachers have been on strike since February 14, to press home their demands for improved funding for universities and a review of salaries for lecturers, among other issues.

Justice Polycarp Hamman of the National Industrial Court of Nigeria, Abuja Division, had on Wednesday, while delivering ruling in an interlocutory injunction application by the federal government, restrained ASUU from continuing with the strike.

The judge had predicated his decision on Section 18 of the Trade Dispute Act, that empowers him to make such decisions in the interest of the nation.
Dissatisfied, the university lecturers yesterday filed a Notice of Appeal to challenge the order of the Industrial Court.
ASUU through its lawyer, Mr. Femi Falana, SAN, had in a motion sought the leave of the court “to appeal against the interlocutory ruling of the National Industrial Court of Nigeria per Honourable Justice P.1. Hamman.”
The appellant also prayed the court for another order, “staying execution of the order of Justice Hamman … pending the hearing and determination of the interlocutory Appeal.”

ASUU is claiming that the ruling of Justice Hamman affects its fundamental rights to fair hearing, adding that it would be in the interest of justice to stay the execution of same pending the hearing and determination of the Appeal arising thereto.
In the 14 grounds of proposed notice of appeal, ASUU is claiming that the trial Judge “erred in law and thereby occasioned a miscarriage of justice when he decided to hear and determine the Respondents’ motion for interlocutory injunction when he knew or ought to have known that the substantive suit filed by the Claimant was not initiated by due process of law.”

ASUU in grounds two of the appeal also claimed that Justice Hamman misdirected himself in law and occasioned a miscarriage of justice when he decided to hear other motions before the motion challenging court’s jurisdiction on the matter.
The appellant further submitted that the learned trial judge erred in law when he held that “pursuant to Section 17 of the Trade Dispute Act, Section 18(1) E mandates the members of the Defendants/Respondents not to take part in any strike pending the determination of the suit.”

After several failed attempts to get the striking lecturers back to work while negotiations continue, the government opted for the current court action and prayed the court to compel ASUU to end the nearly seven months old strike in the interest of the nation and the Nigerian students who are suffering the most from the strike.
The Ministry of Labour had approached the industrial court to challenge the refusal of the striking lecturers to end the nearly seven months old strike, claiming that millions of students have been out of school since February 14, 2022 when they went on strike.

FG to ASUU: Obey Court Ruling, Go Back to Classrooms

The federal government yesterday urged the public university lecturers to heed the ruling of the National Industrial Court by calling off the seven-month old strike and returning to the classrooms.
Minister of Labour, Chris Ngige, who made the government position known, advised ASUU to obey the court ruling and call off its ongoing nationwide strike, while negotiations are ongoing.

He gave the advice while speaking with newsmen in New York on the sideline of the United Nations General Assembly.
Ngige said: “I’m not ASUU but the maximum in law is that when there is a court judgement or ruling or order you must first obey and then we can apply for an appeal if you so desire or apply for stay, that is stay of execution.

“So, the maximum in law, jurisprudence and everything about the law, is that you obey the court’s ruling, judgement or order, no matter how bad.
“So, we expect them to get back to the classrooms but that doesn’t foreclose negotiations, the negotiations should be on as a matter of fact, it will be on officially and non-officially. For example, the House of Representatives had invited us to come and brief them. And together, they are stakeholders.
“You heard Mr. President said to the committee of Pro-Chancellors, when they visited him, that he would do consultation as per the two request on putting an icing on the cake, on the government’s offer to ASUU members and the issue of resettlement fund to cushion the effect of the ‘no work no pay’ situation they found themselves.”

Nigeria Labour Congress (NLC) has waded into the brewing conflict between the Federal Ministry of Labour and ASUU over alleged non-rendition of annual financial returns and audited accounts by the union.
Ngige had accused the leadership of ASUU of failing to submit the annual audited account of its finances as required by law for the past five years.
Owing to this, he said the union was in violation of the relevant section of the Trade Union Act requiring unions to submit their audited account to the Federal Ministry of Labour and Employment at the office of the Registrar of Trade Unions.

Ngige disclosed this in Abuja during a meeting with the Nigerian Association of Medical and Dental Academics (NAMDA), a new group seeking registration, stating that ASUU risks losing its certificate of registration.
He said the law requires that the union and other registered trade unions to audit their account at least once every year and to indicate how they utilise the funds accruing from check off dues paid by their members.
Ngige said that by not submitting the audited accounts for five years running, the union has violated the provisions of Section 37(1) of the Trade Union Act (CAP TILFN 2004).

He said ASUU’s registration as a trade union may be withdrawn because of this.
However, NLC has written to the Registrar of Trade Unions, pleading that it should accept and file the annual financial returns and audited accounts, presented by ASUU on September 9.
In a letter signed by NLC President, Ayuba Wabba, addressed to the Registrar of Trade Unions and copied to the Minister of Labour and Employment yesterday in Abuja, Wabba said:  “We understand that ASUU has responded to your query to submit its Annual Financial Reports and Audited Accounts within 72 hours
“ASUU responded to the query through their letter dated Sept. 9. In the letter, the union posited that it had submitted the Annual Financial Returns and Audited Accounts for 2014, 2015, 2016 and 2017.

“ASUU also averred that the union has now rendered the account for 2018, 2019, 2020, and 2021 as at 9th September 2022.
“All these submissions were made in less than 72 hours in compliance with your query as conveyed in your letter.
“We also understand that ASUU sent one of their staff and their external auditor to personally deliver the requested financial documents on Sept. 9.
“But their efforts to submit the documents were rebuffed by your staff who insisted that they were under instructions not to accept any document from ASUU.
“ASUU subsequently sent the requested financial documents through courier services but again the staff in your office refused to receive the Annual Financial Returns and the Audited Accounts from ASUU.”