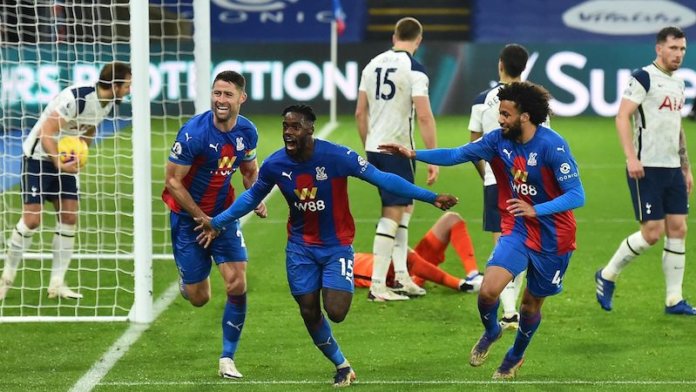 Jeffrey Schlupp scored a late Crystal Palace equaliser after a mistake by Hugo Lloris to deny leaders Tottenham victory yesterday before their top-of-the-table game at Liverpool on Wednesday.

Harry Kane put Spurs on course for a sixth win in seven league games with a shot from 30 yards which Vicente Guaita should have saved.

Spaniard Guaita had kept Spurs at bay with three excellent stops to deny Tanguy Ndombele, Sergio Reguilon and Kane before being caught out by the England captain’s long-range swerving attempt.

But Palace, who hit the post through Eberechi Eze, deservedly equalised when Schlupp bundled in the equaliser after Lloris could not hold Eze’s free-kick.

In the dramatic ending, Spurs substitute Ben Davies hit the bar while Guaita made a spectacular save to keep out a free-kick.

Tottenham’s 22nd competitive game of 2020-21 looked for so long as though it was going to be a case of job done ahead of their biggest test of the season in midweek.

But Jose Mourinho’s side were frustrated by Guaita, whose action at the death to deny Dier was one of the finest saves of the Premier League season.

Dier’s set-piece appeared to be heading for the net until the Palace keeper flung himself across his line to divert it away with one hand.

Despite stretching their unbeaten league run to 11 matches, this will feel like two points dropped for the visitors.

In a highly competitive London derby, they had looked every bit a team at the top of the table as Guaita got down to deny Ndombele from close range before tipping over Reguilon’s rasping attempt and then stopping Kane’s header all in the space of a few first-half minutes.

Kane’s ninth league goal, after another assist by Son Heung-min, was a gift, Guaita misjudging his shot and failing to make what should have been a routine save.

Palace responded well but looked set to end the game without any reward for their endeavour until Schlupp pounced after Lloris’ error – the first goal Spurs have conceded in the Premier League since the start of November.

Asked after the match about the France keeper’s mistake, Mourinho said: “Hugo is the best goalkeeper in the Premier League.”