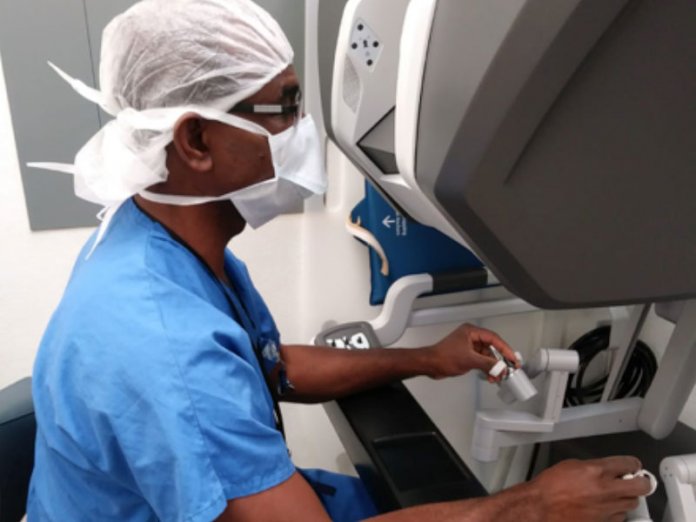 At the Fayetteville Veteran Affairs Medical Center (VAMC) in North Carolina, new ground was broken in the field of medicine and surgery. The hospital, working in collaboration with the Department of Defense (DOD), recently recorded its first robotic surgery using the Da Vinci surgical system technology.

The surgeon at the console, steering this pioneer joint project is Nigerian-born prodigy and celebrated surgeon, Dr. Obinna Igwilo, who worked with a team of clinicians and other employees of the Fayetteville Coastal Healthcare system.

At the core of the surgical breakthrough is the desire of the Fayetteville VAMC and DoD to overcome some of the endemic problems facing the healthcare systems in the US: high cost of care.

Da Vinci technology was approved by the FDA in 2000 as the first surgery system technology for general laparoscopic surgery in US hospitals, according to RoboticOncology.com, and since then, the use of this cutting-edge technology by surgeons has been on the rise due to its stated effect on cost reduction. Because the technology is precise and minimally invasive, post-surgical bleeding is minimised while hospital stay is drastically shortened, leading to reduction in hospital cost.

Other benefits specific to VAMC and DoD, according to VAMC Chief of Staff, Dr. Jeffrey Morgan include a productive “partnership and collaboration resulting to beneficial resource sharing, commitment to good stewardship of taxpayer resources and best patient care possible” According to a release by the medical center, Dr. Igwilo said that the veterans who received the surgeries were happy and appreciative of the benefits.

A member of SAGES Society of American Gastro-intestinal and Endoscopic Surgeons, with special surgical interests in Robotic/laparoscopic/minimally invasive surgery; Endocrine and Colorectal surgery, Dr. Igwilo has been performing robotic surgeries since 2014. A consultant General Surgeon at VAMC and WAMC, he has been cited by his employers for his “active engagement with the training of medical students and surgical residents while also serving as clinical Assistant Professor of Surgery with Campbell University School of Osteopathic medicine”.

Igwilo, who was born in Nigeria, graduated from Ngwa High School Aba in Abia State in 1980 with a distinction, where he was nicknamed ‘Archimedes” – after the Greek Mathematician and Physicist – because of the ease with which he handled mathematics.
Although he is a native of Ozubulu in Anambra State, he grew up in Aba. He was in 1980 admitted to the University of Nigeria College of Medicine and Surgery, where he graduated in 1986 with MB.BCh.

Following his Internship at University of Nigeria Teaching Hospital (UNTH), Enugu, Nigeria, and Clinical externship at Whipps Cross University Hospital in London, UK, among numerous clinical exposures in Europe and America, the budding MD emerged onto the US medical ecosystem, making sure to take a front seat in the ever-changing and technologically driven world of medicine and surgery.

Among Nigerians in diaspora and the homeland, Igwilo’s exploits in medical practice abroad has brought pride and inspiration to many both young and old.

This groundbreaking surgery bears clear testimony to the leading roles being played by Nigerian doctors in the US and around the world in promoting health and advancing the cause of humanity.

…Nduka wrote in from Houston, Texas

editor - August 6, 2020 12:06 am
37
The resurgence of killings in Kauru, Zango-Kataf, Kaura, Kajuru and Jema’a local governments in Kaduna State is not altogether surprising. My column, ‘Mass Murder...

WANTED: A PRESIDENT OF IGBO EXTRACTION