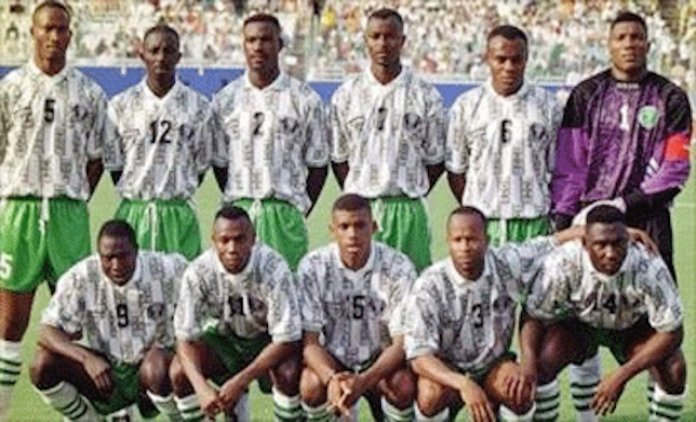 Super Eagles 1994 and 2013 AFCON winners will be playing a PVC novelty match at the Legacy Pitch, inside National Stadium Surulere, Lagos on the 9th of February, 2019.

This novelty match tagged ‘#PVCFootball’ is organised by TAP initiative, a non-governmental and non-partisan organization that advocates for young people’s role in the national reawakening of socio political and economic systems for sustainable development.

The goal of the #PVCFootball novelty match is to use soccer games as a tool to organise and galvanize voices of young people to participate in the upcoming elections.

According to the Executive Director of Tap initiative, Mr Mbasekei Martin Obono, “Young people between the ages of 15 and 35 years constitute one-third of Africa’s population. However, youth’s influence on national politics remains limited. There is a general sense that traditional politics and representative democracy—whereby voters determine the outcome of power struggles at the ballot box—fail to attract the attention of younger cohorts who feel alienated from political processes.”

Football activities have been lined up by TAP initiative to promote democratic participation of young people at the general elections from voters registration to collection of voters card, voting and ensuring that their votes counts.

On the 19th of January 2019, TAP initiative will kick off its football viewing centre campaign in Lagos, Imo, Kaduna, Cross River and Abuja ahead of the #PVCFootball awareness match scheduled for the 9th of February 2019 to dialogue, encourage and educate young people on the need to vote.

The #PVCFootball match is free but spectators will be required to show their PVCs to gain entrance into the stadium.
TAP initiative have also partnered football betting companies in Nigeria to place a wager for punters to predict the outcome of the upcoming general elections.

Mr. Obono said, “the initiative seeks to explore the participation and publicity that betting houses generates among young people to predict and win the number of voters’ turnout through accredited voters in a state.” He went further to say, “the idea of betting is putting your thumb where your money is”

Through the PVC Novelty match, Tap initiative aims to use select AFCON football stars from the 1994 and 2013 teams including Bennedict Iroha, Samson Siasia, Mutiu Adepoju, Uche Okechukwu, Alloy Agu, Joseph Yobo among others to discourage young people from the enticement of selling their votes and political apathy by not coming out to cast their votes based on cheap sentiments and also to communicate and demonstrate the ideals of credible elections and democratic participation through the #PVCFootball Awareness match.