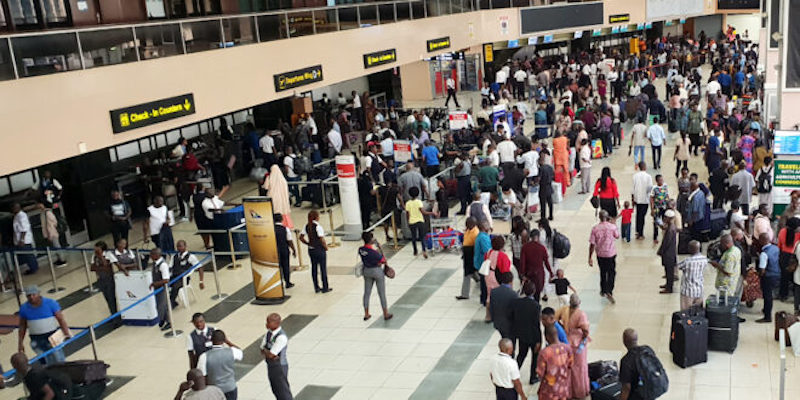 Some foreign airlines operating in Nigeria, who confirmed the development, said many citizens were still leaving the country adding that they recorded full load-factor in their outbound flights in recent times.

THISDAY findings revealed that it had become difficult to get seats at short notice from most of the foreign carriers that operate into Nigeria, even for economy class, which price has risen to average of N1.5 million to N2 million, depending on the airline and destination.

Travel agents told THISDAY that there are higher load on the outbound flights than inbound flights because many Nigerians who travelled do not have the intention to return.

A travel blogger, Dozie Uzo, told THISDAY that last week his sister travelled overseas with her children; that it was only her that had return ticket; her children had one-way ticket because they did not intend to return.

THISDAY learnt that many corporate organisations have lost their technical and professional staff to the exodus because there is loss of confidence in the nation’s economy.

They added that the fears that the 2023 general elections might not provide succour are also fuelling the exodus.

It was learnt that foreign carriers jerked up airfares because of their inability to repatriate their funds from Nigeria as a result of scarcity of foreign exchange.

Studies carried out recently by Business Travel Management (BTM), the all- in- one business travel platform, explained that normally, foreign airlines that serve Nigeria would sell their tickets in Naira and the Central Bank of Nigeria (CBN) would convert that income to dollars for remittance back to their headquarter locations.

However, currently, due to scarcity of foreign exchange in Nigeria, foreign airlines have the equivalent of over $450 million sitting in Nigeria that cannot be repatriated.

According to the studies, “The consequence of this for Nigerian travellers is that it will lead to lower airline frequencies to, from, and within Nigeria. Several international airlines such as Emirates, British Airways, Air France/KLM, Lufthansa and others have reduced their flight frequencies into Nigeria.

“This leads to higher fares since demand is outstripping supply on both domestic and international routes. Fare quotations are rarely available when the client calls back to book. BTM recommends that clients call (not email) to book only when the journey is approved for purchase and instant ticketing. As a result, airlines are adopting a very rigorous churning policy against agents that hold seats without ticketing and issuing Agency Debit Memos (ADMs) for those that do.”

The report further stated: “Consequently, seats cannot be held and as it is always the case, fares are not guaranteed until purchased. Aviation fuel is in short supply in Nigeria since it all must be imported, and importation is being hampered by the economic challenges described above. Fares fluctuate daily and pricing currently seen and available is relatively expensive.”

President of the National Association of Nigeria Travel Agencies (NANTA), Susan Akporiaye, told THISDAY that there are more passengers on outbound flights than inbound because many Nigerians are leaving the country and they don’t intend to return in the foreseeable future.

According to her, Nigerians pay for the outrageous tickets because they don’t have choices than to send their children back to school; some even sell their assets, especially those who don’t intend to come back.

“Those who are leaving the country permanently and those who have their children abroad are the ones that can afford to buy the tickets, which are very expensive. Those travelling on holidays are no more going due to the expensive tickets, which is about N2 million for the economy class.

“We are hoping that this will end soon, I pray that this problem does not linger till next year. It will definitely end this year. It is not as bad as COVID-19 that was clouded in uncertainty. No one knew when it would end but, by 2021 hope rose, especially in Africa that the pandemic would ease off. We are not selling tickets like before but whatever profit you make inflation will diminish the value,” she said.

The immediate past NANTA President and the Group Managing Director, Finchglow Holdings, Mr. Bankole Bernard, said: “What Nigeria is going through now is brain drain because the Nigerian environment is no more conducive. People are leaving for more favourable environment and some with their entire family.”

According to him, “Most of those moving are the middle class. The middle class is the engine room of any country. The more they wait the more the currency becomes lower. These people have been offered safer environment to earn higher emoluments and some will allow you come with your family. I have lost 20 staff to the exodus. They left for Canada. If you are paying somebody N120, 000 the value of the money has slumped so it cannot buy what it used to buy.  We are import-oriented nation, what we are exporting is insignificant compared to the volume of our imports. So there is so much pressure on forex.”

He said that the airlines do this by increasing the fares; so the 20 passengers share the fares of the 100 passengers. This explains why some of the airlines cut down their frequency to Nigeria but increased the fares by over 100 per cent and they fly out of Nigeria with full load with the outrageous fares.

THISDAY learnt that many travellers who wished to book flights, have since discovered that many of the airlines were fully booked, and they had to postpone their trip.