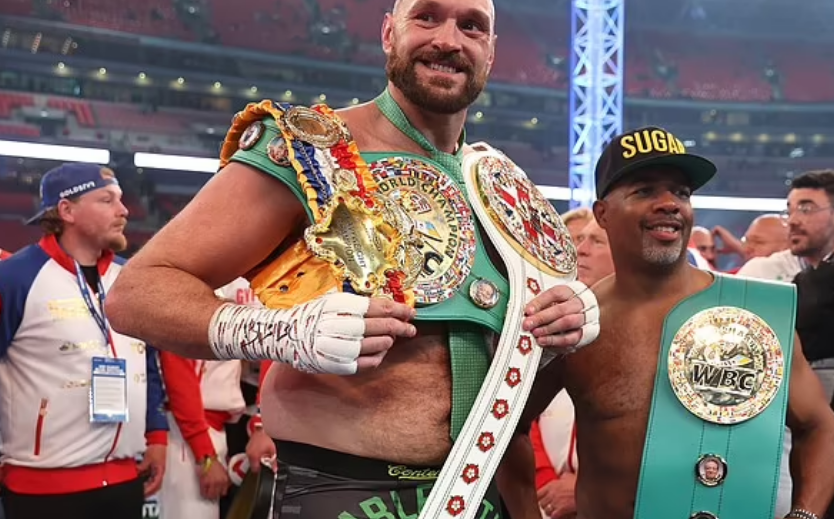 Tyson Fury has said that his written offer to Anthony Joshua is a 60/40 purse split deal for a straight shot at his WBC heavyweight world title this year.

Joshua has since publicly accepted the offer, which prompted his promoter Eddie Hearn to speak to Fury’s representative Frank Warren to both have their say on arranging the fight.

Fury has now taken to Twitter to confirm his offer of a 60/40 split purse, by saying: ‘I’m being bombarded with messages of how much am I going to pay AJ.

‘He doesn’t have any excuses now not to take it, he can’t say I’ve lowballed him by offering him 20 or 30%.

A generous offer considering Fury’s last fight with Dillian Whyte was an 80/20 split purse, showing how keen the WBC champion is to get the fight agreed.

His post comes after both Warren and Hearn shares their views on TalkSport earlier today.

Warren said: ‘The terms we are gonna put forward I think are very, very fair. Tyson is being extremely fair.’

His comments came in response to Matchroom Boxing chief Eddie Hearn revealing that he has opened talks with Warren over a potential heavyweight showdown fight.

Hearn told TalkSport: ‘I said to George Warren last night, ‘Get the details over to us, get the offer over to us. I will take it to AJ, he’s ready to go.’

‘We didn’t expect this opportunity, but it’s a great opportunity to fight for the world heavyweight title in the biggest fight in boxing.

‘And we will definitely look at it.’

Fury and Joshua were set to do battle last year after agreeing a two fight deal in March 2020.

Deontay Wilder, however, scuppered the undisputed bout when he won his arbitration for a trilogy fight with Fury.

Hearn remains skeptical about whether or not the ‘Gypsy King’ is serious about the fight, having also challenged both Usyk and Derek Chisora in recent weeks.

‘I’d love to get really excited about this because I think it’s the fight I get stopped on the street for more than any fight that could be made.

‘It’s a fight AJ has wanted for a long time. Don’t forget we signed for this fight last year before the court arbitration forced the Deontay Wilder fight for Tyson Fury.

‘It’s an interesting one because last week he retired, then he’d only come back to fight Usyk, then he made an offer to Derek Chisora, then he wanted half a billion, then he retired again, then he’s fighting Usyk in December and now he’s fighting AJ.

‘The message is quite clear from AJ: we don’t want to get in a backwards and forwards, we want the fight.’

Joshua has lost back-to-back fights to Oleksandr Usyk, the most recent being in Saudi Arabia last month.

But the Watford-born fighter is keen to take a gamble on his career by rushing back into the ring to face British rival Fury.

‘We had plans after the Usyk defeat to come back in December and then go again in March, get active and get the rhythm going again and then try fight for the world heavyweight title.

‘But I know having spoken to AJ and as you saw with his message that if that fight is there and they’re serious, which I have my doubts [about].

‘But listen, let’s for the good of trying to make it happen let’s believe Tyson Fury.’

Fury hit back at Hearn comments by tweeting: ‘This is easy fight to make normal champion to challenger privileges, & I’m 100% serious

Unless the rich Middle East nations come up with another mega-money offer the only feasible venue for a midwinter blockbuster is Cardiff’s Principality Stadium with its retractable roof.