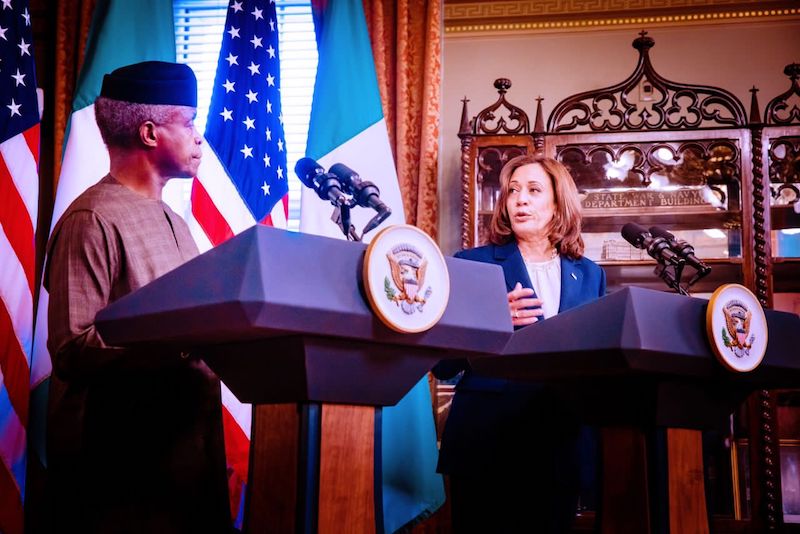 * Forgiven debt to be used for climate action programmes

In a move aimed at significantly advancing the course of global net-zero emissions targets and facilitating clean energy access for the development of Africa, Vice President Yemi Osinbajo, has proposed a Debt-for-Climate (DFC) Swap deal.

Explaining the DFC concept yesterday during a lecture on a just and equitable energy transition for Africa at the Center for Global Development in Washington D.C, Osinbajo stated: “Debt for climate swap is a type of debt swap where bilateral or multilateral debt is forgiven by creditors in exchange for a commitment by the debtor to use the outstanding debt service payments for national climate action programmes.

“Typically, the creditor country or institution agrees to forgive part of a debt, if the debtor country would pay the avoided debt service in a local currency into an escrow or any other transparent fund and the funds must then be used for agreed climate projects in the debtor country.”
Justifying the rationale behind such a debt swap deal, the Vice President submitted that the commitment to it would increase the fiscal space for climate-related investments and reduce the debt burden for participating developing countries.

He said: “For the creditor, the swap can be made to count as a component of their Nationally Determined Contributions (NDC). There are of course significant policy actions necessary to make this acceptable and sustainable.”
The Vice President also proposed the greater participation of African countries in the Global Carbon Market while exploring financing options for energy transition.

According to him, there is a need to take a comprehensive approach in working jointly towards common goals, including the market and environmental opportunities presented by the financing of clean energy assets in growing energy markets.
He said: “In addition to conventional capital flows, both from public and private sources, it is also essential that Africa can participate more fully in the global carbon finance market.

He encouraged developed countries to support Africa to develop into a global supplier of carbon credits, ranging from bio-diversity to energy-based credits,  “which would be a leap forward in aligning carbon pricing and related policy around achieving a just transition.”
While also addressing the concerns of the African continent and other developing countries regarding a just transition, Osinbajo noted that “the central thinking for most developing countries is that we are confronted on this issue of a just transition with two, not one, existential crises; the climate crisis and extreme poverty.

“The clear implication of this reality is that our plans and commitments to carbon neutrality must include clear plans on energy access if we are to confront poverty. This includes access to energy for consumptive and productive use and spanning across electricity, heating, cooking, and other end-use sectors.”
According to him, “nearly 90 million people in Asia and Africa who had previously gained access to electricity can no longer afford to pay for their basic energy needs. The inflationary pressures caused by the COVID-19 pandemic and other macroeconomic trends have been further exacerbated by the ongoing war in Ukraine.

“Countries worldwide have been hit by record prices on all forms of energy. Power prices are breaking records across the globe, especially in countries or markets where natural gas plays a key role in the energy mix.”

Osinbajo sounded a note of caution, saying: “In such a global reality, limiting financing of gas projects for domestic use would pose a severe challenge to the pace of economic development, delivery of electricity access and clean cooking solutions, and the scale-up and integration of renewable energy into the energy mix.”
Speaking on Nigeria’s initiative to combat the unfolding crisis, the VP revealed that the country’s Energy Transition Plan “is designed to tackle the dual crises of energy poverty and climate change and deliver SDG-7 by 2030 and net-zero by 2060 while centering on the provision of energy for development, industrialization, and economic growth.”

He adds: “We anchored the plan on key objectives including lifting 100 million people out of poverty in a decade, driving economic growth, bringing modern energy services to the full population and managing the expected long-term job losses in the oil sector due to global decarbonization.”
Osinbajo observed that “Europe’s energy crisis has not been ignored, it continues to be met with support, and international resources. In stark contrast, the developing world is still being held to account for its emission reduction without adequate support and investment for its energy transitions.”

Acknowledging the contrast to the wider responses to the climate crisis on the African continent, the Vice President said, “We are not seeing careful consideration and acknowledgement of Africa’s aspirations. For instance, despite the tremendous energy gaps, global policies are increasingly constraining Africa’s energy technology choices.”
On the subject of energy investments, he identified the mismatch in the volume of investments experienced in developed countries as opposed to developing countries.

According to him, “while representing just 15% of the world’s population, high-income countries received 40% of global energy investment in 2018. Conversely, developing countries with 40% of the world’s population received just 15% of global energy investment. This hasn’t improved much in recent years.”
Addressing what the ultimate goal of the global energy transition should be, Osinbajo stated that it was in achieving “reliable net-zero carbon energy systems to power prosperous, inclusive economies.”

Speaking on the Nigerian context, he added that it means “building sustainability into our economic planning, which we had developed in an Economic Sustainability Plan in the aftermath of the COVID-19 pandemic. This includes an ambitious plan over the near term to provide 5 million homes and SMEs with cleaner energy through its decentralised solar power programme.”