2023 Elections: Sultan of Sokoto, Former CAN President Sign Peace Accord in US 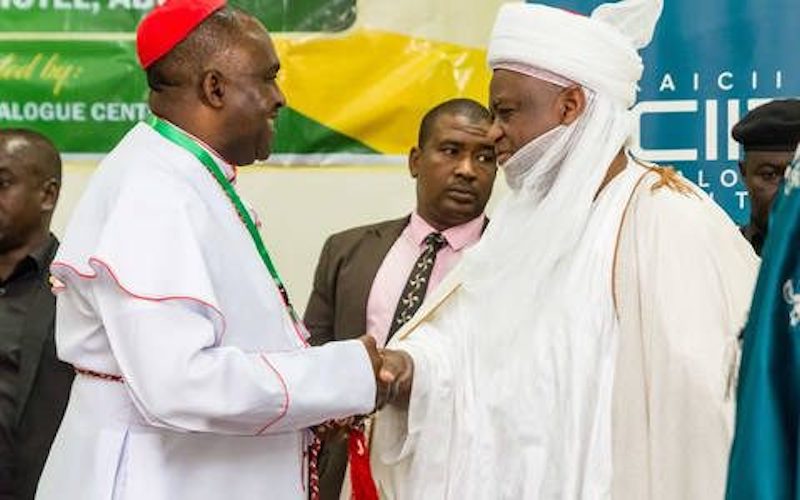 The immediate past President of the Christian Association of Nigeria (CAN), Rev Samson Olasupo Ayokunle, has revealed that he signed a peace accord with the Sultan of Sokoto, His Eminence Alhaji Muhammad Sa’ad Abubakar, in Washington D.C. to engender unity and development in Nigeria.

Ayokunle explained that the peace accord was one of his last assignments before leaving office as CAN president.

In a statement he issued yesterday, Ayokunle said the peace accord, assented to by religious leaders during the International Religious Freedom Summit in Washington, DC, last month, accepted to unequivocally “reject and condemn all use of violence and coercion to spread or hinder political or religious views and identities, or to demean ethnic, religion, or tribal affiliation.”

Ayokunle added that the Sultan was represented at the event by Prof Usman Yusuf.

Against the background of many crises in Nigeria, which he said have had a religious context, the former CAN leader said the accord sought to promote collaboration amongst the various traditions and faith communities present in Nigeria.

“The declaration we signed lays out a number of principles that we all Nigerians can readily affirm. It states that “all people are endowed by the Creator with inherent value and fundamental rights, regardless of nationality, ethnicity, culture, religion or the many other differences that often divide us, and that essential freedom and dignity of every person must be respected and protected,” the statement explained.

It added, “The declaration calls for collaboration amongst the ‘various traditions and faith communities present in Nigeria’ in order to “advance the well-being of all and to resolve conflicts peacefully’. It also makes clear that we “unequivocally reject and condemn all use of violence and coercion to spread or hinder political or religious views and identities, or to demean ethnic, religion, or tribal affiliation,” Ayokunle stated.

The Christian leader disclosed that he and the Sultan shared “a fundamental commitment to the unity of Nigeria and to work collaboratively toward solutions through peaceful and respectful means, affirming the dignity of one another and our brothers and sisters” in Nigeria.

“That is why it was so important for the Sultan and me to sign this declaration, and to do so on the world stage at an important international forum,” Ayokunle stressed. “When I signed, I told the audience of my time working with the Sultan and others at the Nigeria Inter-Religious Council (NIREC). I emphasised how we at NIREC had supported a number of initiatives to bring people of different faiths together. We do that through religious education within our faiths.”

He added, “We also encourage learning about the beliefs of other faiths, as well as dialogue, especially amongst youth so that they see each other as brothers. And we encourage reporting of any kind of violence or violent rhetoric so that corrective or preventive measures can be effectively taken.”

About the upcoming election, Ayokunle noted that he and the Sultan have grave concerns about political and government representatives, sometimes religious representatives contributing to numerous crises in Nigeria.