2023 Elections: INEC Receives 216 Requests for Particulars of Candidates  52 mins ago 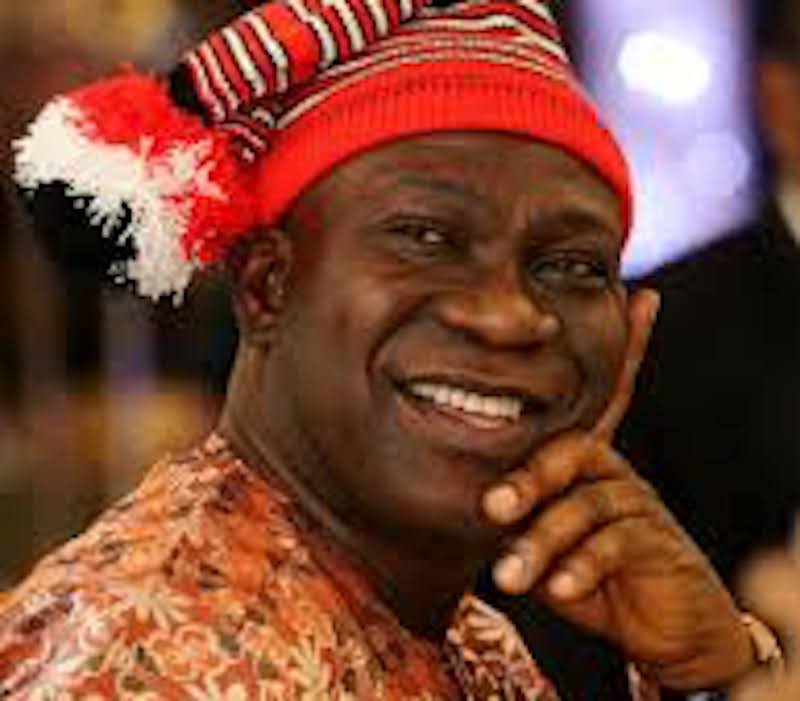 Uche Anichukwu pays glowing tribute to a former Deputy Senate President, Senator  Ike Ekweremadu, who happens to be the longest serving  presiding officer of the parliament in Nigeria’s history

As an Igbo and a Christian, I am a very strong believer in the concepts of destiny and grace, themes that also run through the names of my children. In Igbo cosmology, for instance, Chi Ukwu/Chukwu and akaraka play very critical roles in the life of every man.  Chi Ukwu, the Supreme Being, cuts a preordained path for every man and when a man finds that path and purpose, he ultimately cruises on the wings of grace fulfilling that purpose, despite the challenges on that path.

The function of grace manifests in God using ordinary people to accomplish extraordinary things as can be seen in the biblical stories of Gideon, Joseph, Esther, and David, among others.

When God sent Prophet Samuel to anoint a new king for the Israelites in the House of Jesse, Samuel almost anointed Eliab, for he said in his heart, “Surely the Lord’s anointed is before Him!”

But God said to Samuel, “Do not look at his appearance or at his physical stature, because I have refused him. For the Lord does not see as man sees; for man looks at the outward appearance, but the Lord looks at the heart.”

The same applied to Jesse’s other sons, Abinadab and Shammah, who had the outward appearance of men of war and king of Israel.

Then the prophet asked Jesse if he had no other sons, to which Jesse answered, “There remains yet the youngest, and there he is, keeping the sheep.” They sent for David from the wild; and once Samuel sighted him, the Lord said: “Rise and anoint him; this is the one.”

Born of humble background, there was probably no way, in human estimation, anybody could have imagined that the transformation experienced by Mpu, Aninri, Enugu West, and many parts of Enugu State, including Nomeh Unataeze, my community, would ever come by Ekweremadu. More so when he comes from the smallest senatorial district in Enugu, the smallest local government in that small district, and the smallest community in that local government.

But as already established, God looks at the heart, especially the heart of service, while raising leaders; and this is one virtue even Ekweremadu’s fiercest critics would readily give to him. This, I believe, is the secret of his meteoric rise to power and his political staying power.

For instance, when the priest that conducted the valedictory christian service for outgoing college students asked him to make a request of God, Ekweremadu did not ask for personal riches to “pepper them”. Instead he prayed God to place him in a position that he would be able to lift his people and turn around the fortunes of his state. In return, he promised to build a church for God. Today, that church stands visibly at Mpu, along the Awgu-Ndeaboh-Mpu-Okpanku-Akaeze road attracted by Ekweremadu to wipe away the reproach, tears, and hardship that had been the lot of those communities since the days of their ancestors.

Also, that Ekweremadu was called to leadership at a very early age underscores his call to serve. Born on 12th May 1962, he was elected by his peers as the chairman of their age grade at about age nine. It has been from one service to another ever since, as he later became the President-General of Mpu town union for many years on the insistence of his people. Following the excellent services he rendered to the pressure group that advocated the creation of Aninri from Awgu LGA, the elders of Aninri approached him to take up the responsibility of pioneering the new local government area in 1997. He won the election on the platform of the United Nigeria Congress Party (UNCP) and later won the Best Council Chairman Award, as he built a local government secretariat on a virgin land at Ndeaboh when Aninri’s contemporaries were still performing groundbreaking ceremonies. But he couldn’t complete that tenure because the transition to civil rule was short-lived following the death of General Sani Sani Abacha.

Luckily for him, he lost his reelection bid to return to the council to continue his good work. He almost lost his life in the process, given the avalanche of electoral violence unleashed on him. Yes, he was lucky to have lost that reelection bid because it was God using it to in order to redirect his political trajectory to something better and bigger. Ikeoha, as he is fondly called, joined Dr. Chimaroke Nnamani team and became the Director-General of the Nnamani campaign organisation.

Ikeoha served as Deputy President of the 6th, 7th, and 8th Senate, making him the longest serving presiding officer of the parliament in Nigeria’s history, with his emergence as Senate number two man in the 8th Assembly being by far the most dramatic and tension-soaked.

The Senator was elected the First Deputy Speaker of the Community Parliament in 2007 and the Speaker of the regional parliament in 2011, as he already earned the respect of critical stakeholders in the region given his outstanding performance as the chairman of the parliament’s interventions in the political situations in Niger Republic and Guinea.

Although the primary business of a lawmaker is to make laws and carry out oversight functions on the other arms of government, Ekweremadu has taken the parliamentary function of representation a thousand notches higher. He has been silently working, touching lives, and transforming communities, including mine.

Apart from development projects like school blocks, electricity, and water projects he sponsored in his personal capacity, Ekweremadu has attracted more than 26 projects/interventions in Enugu East senatorial district, including the ongoing Ozalla-Obe-Umueze-Agbani-Akpugo-Amagunze-Ihuokpara-Ebonyi road and the also ongoing Nenwe-Nomeh-Mburumbu-Nara road project with a spur to Oduma; over 15 projects in Enugu North senatorial district, including the Awka-Ugwuoba-Oji River-Nachi-Udi-9th Mile-Abor-Ukehe-Opi; more than 270 projects and interventions in Enugu West senatorial district, including the Awgu-Achi-Oji River Road, ongoing Ugwueme-Nenwenta-Nkwe-Ezere-Awgunta-Obeagu-Mgbidi-Mmaku road project, Ugwueme-Nenwenta-Ezere-Nkwe-Mgbidi-Mmaku-Awgunta road projects, and Umulumgbe-Affa-Ikedimkpa-Amaozalla-Egede-Awhum road project, just to name a few; and 31 projects outside Enugu State.

These are apart from scholarships, bursary awards, political appointments, employments, and donations to noble causes.  For instance, over 4,143 undergraduates have benefitted from the Ikeoha Foundation’s Bursary Awards across the Enugu State, 106 students have received full university scholarships, going on to become successful professionals and businessmen and women, which 12,207 persons have received education through the Ikeoha Foundation Adult Programme. One can actually go on and on.

But perhaps, one of the greatest decisions that underlines Ekweremadu’s commitment to service of his people is his decision to run for the governorship of Enugu State in 2023. Many, including his friends in the international community thought he would gun for the presidency, given his rich resume. But Ekweremadu sees things differently. He believes that with Nigeria’s current state and structure, the country stands a better chance of revival and development by getting the states working.

“In the course of this journey (national and international service), I have met world leaders, business leaders, and made friends in both the private and public sectors of the national and global economies. I have had the opportunity to understand how states and nations are transformed. A good example is a city like Dubai, the UAE, which was a desert, but has now become the world most digitalised city and a global investment hub. I have an insight into the economic transformation taking place in Rwanda and Ghana.

“At this point, therefore, I believe it is time to focus on Enugu State and Enugu people without whom I would not be who and what I am today”, Ekweremadu states in manifesto, “My Agenda for Enugu”.

Explaining more during an interview with some newsmen, he added: “If you go to UAE, it is a federal state like us; like in Nigeria, they were in darkness in terms of governance; nothing was working; it was pure desert with poor people everywhere until one of those emirates just like states in Nigeria decided to think differently in Dubai. Dubai now went ahead in the aviation sector to Pakistan and hired one aircraft and started what is today the giant called the Emirates. They went into housing and started building high-rise buildings and asking the whole world to come and invest saying this is heaven.

“So, if by the grace of God we have the opportunity of doing what we intend to do in Enugu, we are hopeful that, that can inspire the rest of the states and that is how Nigeria can also do well”.

Nations in distress pray for leaders that will turn around their fortunes. Ikeoha stands out, for while others are coming with promissory notes, Ikeoha is coming with verifiable achievements and capacity. He represents a turning point for Enugu State and the South-east region.

Undoubtedly, in him, Ndi Enugu now have their own Lee Kuan Yew, who moved Singapore from a Third World to the First World in a generation; Franklin D. Roosevelt, who helped the American people regain faith in themselves in the face of the Great Depression; and their own Park Chung-hee, who charted South Korean transformation from a war-torn, poor nation to one of the world’s leading economies.

As the nation, including President Mohammadu Buhari celebrates this great but silent achiever, patriot, transformational and visionary leader, it is clear that in Ikeoha Ndigbo, God has awarded Ndi Enugu a penalty in their quest for an all-round transformation and a great future. It is now up to them to bury the ball in the net or blow it over the bar, God forbid.