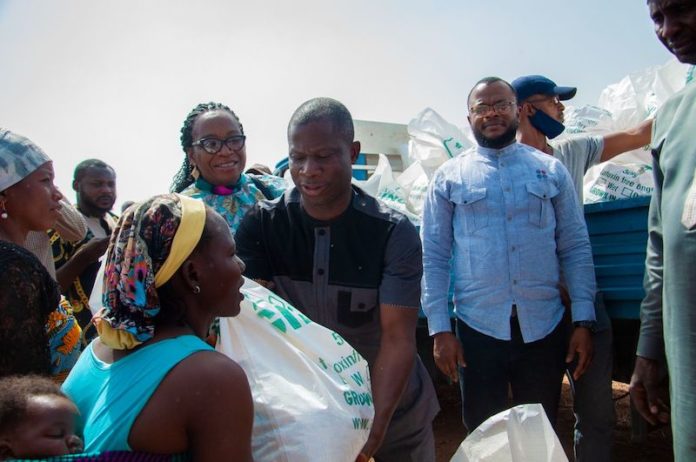 John Shiklam writes on the intervention of Agrolog, a Kaduna-based agribusiness company, which recently distributed foodstuff worth N20 million to victims of banditry at various IDP camps in the Southern part of the state, to assuage  hunger and a looming humanitarian crisis

The recent donation of foodstuffs worth N20 million by Agrolog, a Kaduna based agribusiness company
to victims of bandits attacks at the Internally Displaced Peoples (IDPs) camps in Chikun, Kajuru, Kaura, Zangon Kataf, Jama’a and Kauru Local Government Areas of Kaduna State, was big relief considering as they seemed to have been abandoned to their fate.

The company which deals in ginger processing, has been doing business with these communities, some of which were sacked by the bandits.

Jonathan Asake, President of the Southern Kaduna Kaduna Peoples Union (SOKAPU), said over 108 communities, were displaced by bandits in the affected council areas.

Many of the victims are at the 11 Internally Displaced Persons (IDP)
camps while others are said to be squatting with relations and well meaning individuals.
Their homes and property were destroyed by invading bandits rendering them homeless and hopeless. Thus, it would take them a long time to recover from the devastating effect of the attacks.

Most of those at the camps are women and children, some of whose husbands or mothers, respectively, were killed by the criminals.

Kaduna is one of the states under serious attack by bandits in the North- west.
According to a security reports released on February 1, 2022, by Samuel Aruwan, Kaduna State Commissioner for Internal Security and Home Affairs, in 2021, alone, a total of 1,192 people were killed while 3,348 others were kidnapped by bandits across the state.

Speaking at the flagging off of the distribution of the foodstuffs in one of the IDP camps at Anguwan Zawu, in Gonin Gora, Chikun LGA, the SOKAPU President lamented that thousands of people in the affected communities have been rendered homeless by dare- devil bandits in Chikun, Kajuru and many Southern Kaduna communities.

Asake expressed concern about an impending humanitarian crisis in the affected areas, unless urgent steps were taken to assist the victims.
He commended Agrolog for its kind gesture while appealing to other
corporate bodies, groups, and public spirited individuals to come to the aid of the victims.

“Some of these people are living in uncomplicated buildings. Those who sustained injuries during the attacks could not afford to go for medical treatment because they don’t have the resources. Hundreds of children in the affected communities had been out of school”, Asake said while calling on the Kaduna State government to also assist the victims as the food items donated by Agrolog were distributed across the various IDP camps.

Speaking during the event, the Managing Director and Chief Executive Officer of Agrolog Limited, Dr. Manzo Maigari, said the donations were part of the company’s social responsibility.

Maigari, a former commissioner for agriculture under the El-Rufai administration, said the donation was targeted at 10,000 families affected by attacks.

He added that N2million had also been set aside for medical treatment for those wounded during the unfortunate incidents but could not afford to go to the hospital for treatment.

He said the company which deals in the Ginger-value change, has been working with the communities as partners, adding that “our company, Agrolog Limited is basically an agribusiness with focus on Ginger value. We introduced a social entrepreneurship model where we give small holder farmers input with credit and they pay back with ginger.
“We as a company have decided to give back to the people that we work with – the communities where we do business as a company.

“This is basically a social responsibility that aims at supporting government efforts as well as that of good spirited individuals who have always been there for some of our brothers that fell victims of this banditry attacks”, he said.

The former commissioner, who noted that banditry was a nationwide challenge, called for the support of good corporate citizens as well as individuals to support the victims.

“We have mobilised items for the immediate needs of victims of these attacks. You can see packages that contains maize flour, beans, rice, palm oil, salt, maggi, pomade, toothpaste, sanitary pads and other things.
“The package is aimed at touching 10, 000 families across communities in Chikun, down to the southern part of Kaduna State”, Maigari said.

He assured that the company will continue to do its best to ensure that it live up to expectations, adding that  government alone cannot do everything, thus the need for support to the victims.

“We must necessarily support and I call on other good spirited Nigerians to look in this direction very seriously because we have quite a number of people who have been displaced and are in dire need of survival.

“We decided to give our widow’s mite to assist victims of these unfortunate attacks. Our budget for this, is N20million, most of it is in kind as in products we packaged.

“But our engagement with people on the field showed that the victims required medical support. We understand that there are people that have had to be amputated just because they couldn’t afford N2000 or N5000 for medical treatment.

“There are people who suffered fractures, there are those who require bullets to be extracted from their bodies.
What we did was to set aside N2million as direct medical support”, Maigari said in an interview with journalists.
He said his company was working with Radi Foundation, a nongovernmental organisation (NGO) which has been supporting the victims to reach out to them in the camps.

Expressing gratitude to the company, the coordinator of the Anguwar Zawu camp, Habila Madami, said the victims had not been surviving on donations from groups and individuals.

He said there are over 5000 people from communities in Chikun and communities from the neighbouring Niger State.
Maigari who was accompanied by his wife, Juliana Maigari and some officials of SOKAPU, was also at the Rimau IDP camp in Kajuru LGA.

At the camp, Reuben Buhari, coordinator of Radi explained that the victims were from about 14 villages that were constantly under attack by bandits, adding that the villagers lost their loved ones while their homes were burnt by the bandits.

Buhari said it was only recently that the displaced villagers had to go back to their burnt homes after about two years to gather the bones of their beloved ones killed by the terrorists for burial.
While distributing the foodstuffs at camp, Maigari urged the victims  to be strong and look to God for solution to the attacks.

He promised that the company will find ways of assisting them to cultivate ginger in large quantity as soon as the security situation improves with a view to find a viable means of livelihood.

At the Mercy Camp, Zonkwa, Zangon Kataf LGA, the Coordinator of the camp Rev. Gambo Waziri, who was represented by David Nyat, said the donation of the foodstuffs was a divine intervention as they had ran out of food at the camp.

Waziri said the displaced persons, mostly women and children, came from Gora, Abuyab, Matei and other villages that were recently attacked by suspected herdsmen.

He said no fewer than 30 children were given birth in the camp.
He commended Agrolog for the kind gesture and called on the Kaduna State government to come to aid of the victims who have lost everything.
In his remarks, Maigari said with the gradual return of peace in Southern Kaduna, the company plans to engage 40,000 farmers in Ginger farming so as to assist them get on their feet.

At the Samaru Kataf camp, also in Zangon Kataf LGA, Dr. Michael Dogo, who received the Agrolog MD and his team, explained that the camp is located in the Widows’ Training School, courtesy of combined efforts by ECWA Samaru Kataf DCC and Atyap Community Development Association (ACDA).
He further explained that at the peak of the attacks, the camp had about 7,000 displaced persons but some had gone home.

He thanked Agrolog for identifying with the people in their trying moments.
Also at the Kafanchan IDP camp, the coordinator, Pastor Gideon Mutum
praised Maigari for identifying with the people without any motive.
He stated that most of the displaced persons were not finding it easy to feed as most of those who accommodated them in their homes had also ran out of foodstuffs.

The Agrolog Managing Director, said as a responsible corporate citizen, the company stands for humanity and will do its best to ensure that the victims of the attacks are up on their feet again.
He urged them not to give up despite the trauma the have gone through following the mayhem visited on them by the bandits.

Meanwhile, besides foodstuffs, the IDPs are also in need of clothing, beddings, water and medical facilities at the camps as life will never be the same again with the victims as they lost every of their possessions – houses, animals, clothing, grains etc to the bandits.

According to Asake, it will take the victims a long time to fully recover from the trauma they are going through.
“Yet, the federal government is spending resources, training and rehabilitating “so called repentant Boko Haram terrorists”, while their victims suffer agonising hardship and pains”.

Quote
“Some of these people are living in uncomplicated buildings. Those who sustained injuries during the attacks could not afford to go for medical treatment because they don’t have the resources. Hundreds of children in the affected communities had been out of school”