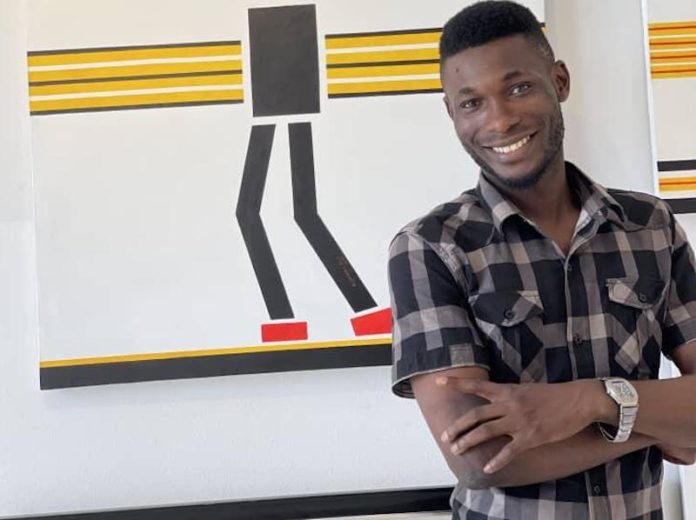 With an exhibition nourished by his fixation on his everyday struggles as a Lagosian, the Delta State-born artist Seidougha Linus Eyimiegha – a. k. a. Mr Danfo – celebrates the city’s ordinary people, says Okechukwu Uwaezuoke

There is indeed a Lagos dream. It’s a dream that, like a magnet, never ceases to attract thousands in droves to its termite-dense neighbourhoods. Acting as the pheromone for the majority of these migrants is an undefined quest for greener pastures, which leads them on and keeps them coming. And when, eventually, the delusional bubble bursts, they are forced to confront the harsh realities of a hand-to-mouth existence.

Thus, like many before them, Seidougha Linus Eyimiegha’s parents arrived in the mega-city from their Delta State hometown full of lofty dreams, which hovered around living above material concerns. Sometimes, they had to wend their way through byways that included daily commutes to earn enough to keep food on the table and a roof over their heads.

Decades later, Eyimiegha – now a 31-year-old – reflects on the circumstances that compelled him to join the rat race soon after he was old enough. Hence, recollections of his “previous struggles” often rise vividly before his mind’s eye, wrapped in a yearning tenderness and a certain sense of dreadfulness, whenever he encounters street hawkers in Lagos traffic. “With the increasing number of people migrating to Lagos presently and the need for people to survive in this urban city, there are more people settling for common job titles just like my mum and dad did back in the days,” he observes.

Inevitably, these outward impressions of his not-so-distant past mingle with his present circumstances and leave their traces in his consciousness. These impressions are ultimately condensed on canvas into minimalist forms, which, the artist believes, embody and express their essential meanings. Is it any wonder that the artist’s inner perception of his environment becomes the central theme around which his solo exhibition, titled Portraits of Public Figures in Lagos, orbits?

Speaking of the exhibition, which opened on Friday, April 8 at Alliance Française, Mike Adenuga Centre, in Lagos’s upscale leafy neighbourhood, Ikoyi, it is a visual cocktail of abstract depictions of day-to-day struggles for subsistence in the littoral city.

No doubt, it was Eyimiegha’s fixation on the predominantly yellow commercial mini-buses with black stripes that earned him the sobriquet, “Mr Danfo.” Indeed, those yellow chaos-fiends, which as irritants buzz around the city’s traffic-choked thoroughfares, have also become synonymous with its street smartness and, so to speak, impacted his early childhood years’ sensibilities. As for the conductors of those mini-buses, they were – and still are – odd types, who typically cling precariously beside the buses’ slightly-opened doors as they practically caterwaul their destinations. “In those dramatic ages of my life, I would hold anything within arm’s length since I could not hold a real Danfo to demonstrate my conductor role,” he narrates. “Little did I know that 20 years after all those childhood dramas, I would still express the influence of Danfo in my art practice.”

Thus, the artist appropriates “Danfo,” which he refers to as “a dominant motif in my thinking and creation,” as not only a means of navigating the chaotic rabbit-warren of Lagos streets but also as a metaphor and an entry point into Lagos social circles. “Just as Danfo tells current stories through its interior and exterior designs, so too do I re-enact those stories in my paintings, utilising divergent colours, geometric shapes and graphic designs.”

Meanwhile, through the subliminal depictions of the tumultuous scenes culled from the repositories of his experiences, the 2014 Delta State University, Abraka graduate tells an abridged story of his life. This he expresses as geometrically-influenced patterns on canvas, neither glorifying nor soliciting the pity of his viewers. And an adjunct to these sketchy anecdotes of his personal life is those of the ordinary people he encountered daily in the streets.

These street people, who in their own right deserve to be called “public figures”, play unique roles even as the “dregs of society”. In paying tribute to these resilient ones, Eymiegha says he draws his inspiration from the preceding efforts of the Dutch Golden Age painter Rembrandt Harmenszoon van Rijn, the American visual artist George Condo, and Nigeria’s Bob-Nosa Uwagboe. “Directly or indirectly, the common man or woman has some sort of connection with all of us,” he argues. “Hence, it is important to study and document their quintessential role in our lives.”

But the trouble with abstraction is that it leaves a lot more to conjecture than it expresses in easily discernible forms. Thankfully, the titles of the acrylic paintings are on standby as useful hints to decipher the messages of the paintings. For instance, through the titles, the viewer easily fills in the blank spaces in his imagination while contemplating the stick manlike figures in “Johnny Just Come” and “Okada Man”, mulls over “Fine-boy Conductor” but is bewildered by “Danfo Chief.”

This inevitably calls into question the artist’s untrammelled adherence to aesthetic canons and vocabulary, which oftentimes conflict with his role as a mediator of higher inspirations. Not even the sharing of his everyday struggles as a Lagosian exonerates him from directing his audience’s gaze to higher goals. Even if his portraits of ordinary men are interesting, they still leave the viewer with an unanswered question: “What next?” Indeed, the fact that the artist has somewhat risen above the circumstances of his early childhood years further imposes a burden of responsibility on him to inspire others who are stuck in those conditions to strive higher.

Meanwhile, the exhibition – which seeks to re-brand and redefine the conceptual designs on these yellow mini-buses for the appreciation of a wider audience – remains open until Saturday, May 14.

Quite surprisingly, Eyimiegha is no stranger to the Lagos exhibition circuit, for as recently as November last year, his solo exhibition, Elixir, which featured an installation titled “Sapele Spirit,” elicited the interest of aficionados. Earlier in September, he participated in the Lagos Comic-Con and his works were included in an international exhibition at the Museo de Ciudad de Guadalupe, Nuevo Leon, Mexico. Before that, in 2020, he was one of the finalists in the Art X Review. That was the same year he participated in the Floor One 9 Exhibition by Art Twenty-One, Lagos, which was held from February to October. In October 2019, he was also part of the Ofala Festival Art Exhibition in Onitsha.