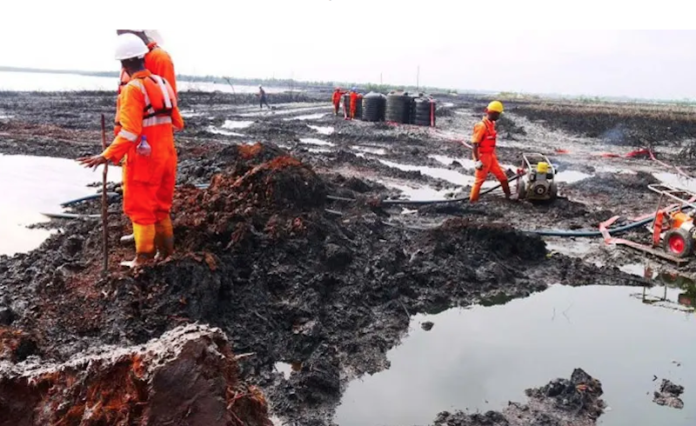 Indigenes of Opu-Nembe and surrounding communities have protested the inability of the Aiteo Eastern Exploration and Production Limited or the government to stop the oil spillage currently devastating their communities following the blow out from the OML 29 Well Head 1, which was operated by the indigenous oil company. The oil spillage has lasted for 31days.

The protesting communities, which were led by the Nembe Se Congress (NSC) that is made up of eminent personalities and chiefs from Nembe, stormed the Nigeria Union of Journalists’ (NUJ) press center with placards, calling on the oil company and relevant authorities to end the spillage and save the people in over 41 communities from becoming refuges in their own state.

Addressing the press, the President of NSC, Professor Monday Godwin-Egein, said the that group is deeply concerned that over a month since the incident at Worikumakiri, the Oml 29 blowout is still spewing out crude oil and gas onto the rivers and creeks as well as the environment unabated.

Godwin-Egein said: “This is arguably the biggest oil spill disaster in the history of oil and gas exploration and exploitation in Nigeria. Unfortunately, there appears to be no immediate respite in sight for our people as the affected company, Aiteo Eastern Exploration and Production Limited, does not have the capability or necessary assets to contain the situation. Thus, dangerous hydrocarbon fluids are gushing out from the well head at an unprecedented rate.

“Reports so far show that over 2, 000, 000 million barrels of crude oil and gas has already spilled onto the river, and have spread through the interwoven network of rivers, creeks and tributaries all the way to the Atlantic Ocean; and in the process contaminating the ecosystem around Nene Se Kingdom and communities in Nembe and Brass Local GovernmentAreas of the state.”

“The congress seized the opportunity to advice the people still living at the various fishing and settlements around the spill site to immediately relocate to safer locations in view of the health implications of the spillage.”

They demanded, among other things, that relevant government agencies should compel Aiteo to ensure quick capping of the spill and begin comprehensive cleanup operations expeditiously in compliance with global best practices.

“The federal government should ensure that the Joint Investigative Visit (JIV) takes place as soon as possible and the outcome made public.

“May we use this medium to advice all interested parties in this matter to stop playing politics with the lives of our people and our environment, all of which are currently under serious threat,” he said.