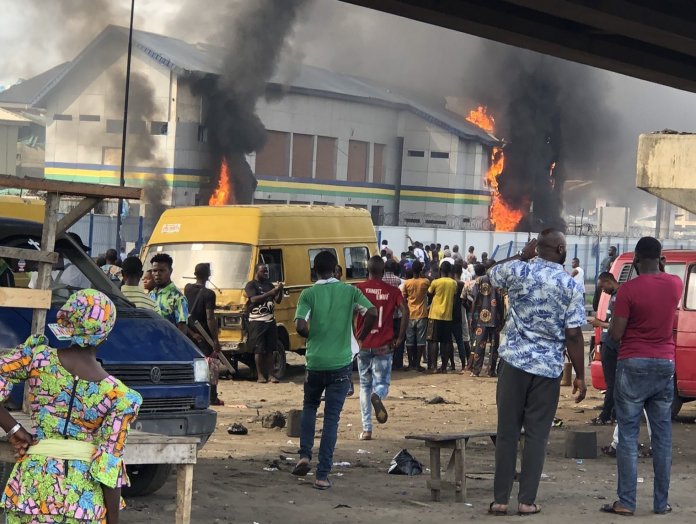 Two people on Tuesday were reportedly killed as some thugs attacked and set Orile Iganmu Police Station ablaze while three others were said to have been killed in Ketu, Mile 12 area of Lagos State.

According to some residents who spoke anonymously to THISDAY, one of the officers at Orile shot and killed a resident Tuesday morning, that aggravated the anger of hoodlums, who already tagged Orile Station as one of the most corrupt in the state.

The station is currently on fire, causing pandemonium in Orile Iganmu as seen in a viral video.

The remains of the victims had machete cuts and their bodies dismembered in their pool of blood.

Thugs were said to have hijacked the peaceful #EndSARS protests, causing the protesters to scamper to safety while the thugs created havoc, destruction and mayhem.

Hoodlums have also taken over protest in Orile Iganmu, Amukoko, Layeni, and Ijora areas of Lagos while reports said that the thugs attacked Mopol headquarters in Ikeja with an attempt to pull down the gate but failed.

The Lagos fire service said it had been alerted but yet to move to the scene of the burning police station fearing that thugs may attack them.

Meanwhile, when THISDAY spoke with the Director of Operations, Lagos State Emergency Management Agency (LASEMA), Engineer Adebayo Olatunde Akinsanya, he said LASEMA was yet to be informed.

Akinsanya promised to get back to THISDAY with the necessary information. He was yet to do that at the time of filing this report.