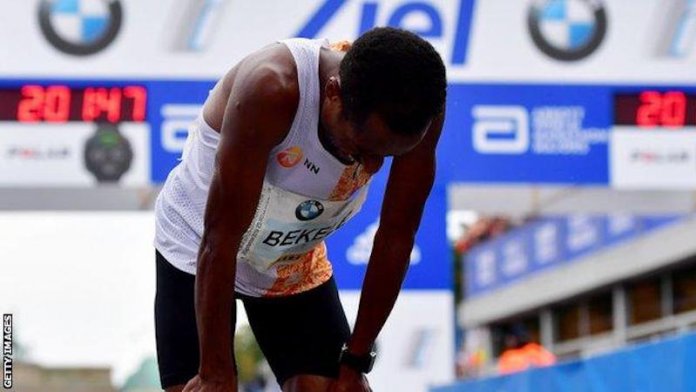 Kenenisa Bekele’s much-anticipated London Marathon duel with Eliud Kipchoge is off after the Ethiopian pulled out with a calf injury.

Bekele, 38, was just two seconds short of Kipchoge’s world record when he won the Berlin Marathon last year. “I am very disappointed,” said Bekele. “I picked up a niggle in my left calf after two fast training sessions too close together. I truly believed I would be ready but today it is worse and I now know I cannot race on it.”

He added: “This race was so important to me. My time in Berlin last year gave me great confidence and motivation.
“I am sorry to disappoint my fans, the organisers and my fellow competitors.” Kenya’s Kipchoge is now the clear favourite to win his fifth London Marathon on Sunday.

Bekele admitted on Wednesday that he had injured himself earlier this year trying to use the latest incarnation of Nike’s shoe technology.
The shoes, which use a carbon plate and highly resilient foam to maximise the energy returned to runners, have coincided with new world records in both the men’s and women’s marathon.

“Several times I had some minor injuries, like a muscle stretch, because the shoe is not stable under the foot,” said Bekele.
“It’s really unshaped. It’s really soft. The muscle needs to adjust to the movement under it. It’s really difficult.”

Bekele had planned to race in the older Vaporfly models rather than the latest Alphafly versions that Kipchoge will wear.
The pair’s rivalry stretches back to the World Cross Country Championships in March 2002, where they met for the first time at a global level. Since then they have both won world and Olympic medals on the track.

Kipchoge has had the upper hand on the road, winning all four of their races over marathon distance.
Bekele’s withdrawal leaves compatriot Mosinet Geremew as the fastest rival to four-time winner Kipchoge. Geremew finished second to Kipchoge in last year’s London Marathon, 18 seconds off the Kenyan.