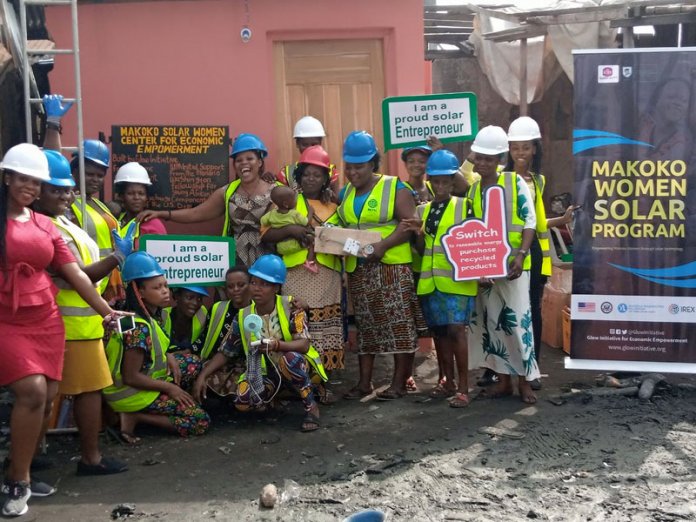 The SWEEP initiative invested in solar technology to improve the lives and livelihood of select Makoko Women fish farmers and traders held their first pilot on 14 – 16th March 2020.

Makoko is an urban slum silt situated on the Lagos Lagoon with an estimated population of 105,000. The major means of livelihood is fishing. The men do the fishing, while the women prepare and sell the fish in markets. The lack of stable electricity has led to the damage of leftover fish that was not sold. The hefty smoke which comes from long hours of smoking fish aids climate change and reportedly increased respiratory issues and eye problems causing the women to give up on the business and lose their means of livelihood. This situation inspired the Makoko Women Solar Programme, who trained the women on how to design and install solar electric systems and how to build important solar technologies for fish and other technologies to aid them start up own solar businesses. The project additionally launched a solar centre where Makoko Women will gather and receive knowledge and support as they journey into the world of solar entrepreneurship.

Speaking on what has changed in the community as a result of the project, The Founder and Executive Director of Glow Initiative for Economic Empowerment, Ms. Glory Oguegbu, shared her favourite part of the programme.

‘’Trust, renewed hope I would say. The people in Makoko community expressed more trust and hope after being introduced to the project team on the day that we made an introductory visit with my American partner. I could see the renewed hope in their eyes. Apparently many other organisations had made promises they did not fulfil. All the while we were planning the project with them, it seemed they believed it haphazardly. It looked like they felt that we wouldn’t really build a solar powered centre for them through which they will sell electricity and teach their women how to design and install solar panels for electricity generation. But the fulfilment of our project helped them regain trust that there are genuine organizations who will invest in their progress and livelihood.”

The solar powered centre is generating electricity for the community members. What is especially interesting about this centre is that the solar was installed with supervision by the trained Makoko women themselves so this makes them see it as their own very project.

Many more people can now come to the centre to learn more about how solar works, solar packages that can work for their homes or small business, receive training on solar advocacy by our trained Makoko women leader who is in charge of the centre. The solar centre has introduced a new kind of joy to the community as it is a one stop place where you can get electricity non-stop at any time of the day.

The solar centre has lightened up the community and many of the trained women are now working on installing solar in their homes leveraging on the training they have received and the after support and guidance which will be provided by the trained centre manager.

The trained women will walk up to the solar centre at any time and seek support and advice from the centre manager around installing solar in their homes, starting a solar business, building their own solar powered dryer for fish. The trained women will access all tools / equipment and advice needed to build their own fish dryer from the centre. They will build it at the centre supervised by the centre manager and carry it to their homes or place of business afterwards.

To ensure the project’s sustainability, the initiative selected a local community member as the project manager and empowered her with solar products such which she can sell at the centre and also use to demonstrate how solar works to the people who will come to make enquiries about solar in the centre. Some of the products includes, solar lamps, solar flood light for use out at sea for the fisher men and women and clean cook stoves. She will also assist the women who might like to venture into solar entrepreneurship by giving those products they can sell and pay back to her.

Part of the goals of the solar powered centre is to sell electricity. In this centre, people can walk in and charge their phones at a small fee. The money raised from this will be saved to later purchase a white board, a projector and a bigger extension for the centre so that the centre manager can continue to train and teach people about: a) how solar works to generate electricity, b) practical / easy ways and options to switch to solar for community members, c) starting a solar business, d) building your own solar dryer, e) designing a solar system for your home or small business etc.’’

Oguegbu explained her favourite part of the programme: ‘’On the second day of our project the women were trained on how to install a solar panel on the roof of the newly built solar centre for electricity generation. All 20 of them took turns to participate during the live installation on the centre.

“I would never forget the feeling I felt when during the very last tightening of a bolt to the battery and Light shone through the LED Bulbs in the centre, completely powered by the sun – The cheer and shouts of joy from the women telling each other congratulations and screams of “Solar is Working” which filled the atmosphere will live with me forever.”

Early success stories from the Makoko Solar Centre are:

· On the very day we finished the training (two days ago 16th March) whilst we were in the centre rounding up, up to five people walked into the centre very excited to see light in the midst of no electricity. They inquired about how they can power their own homes. Two of them who owned barbing centres for men’s haircut, inquired about how to power their barbing centres.

· On the first day, 12 people paid for their phones to be charged and 17 people paid on the second day, 11 people on the third day.

· On the first day, a resident of the community came to the centre and asked Mariam to supply him with one carton of solar lamps so he can sell them at his shop. Mariam is now working on getting the supplies ready.

· Seven more people walked into the centre on the second day inquiring about how they can get solar for their own houses. A man who owns four building in the community invited one of the women to come and conduct an energy audit in his houses so that he will install solar electricity in them.