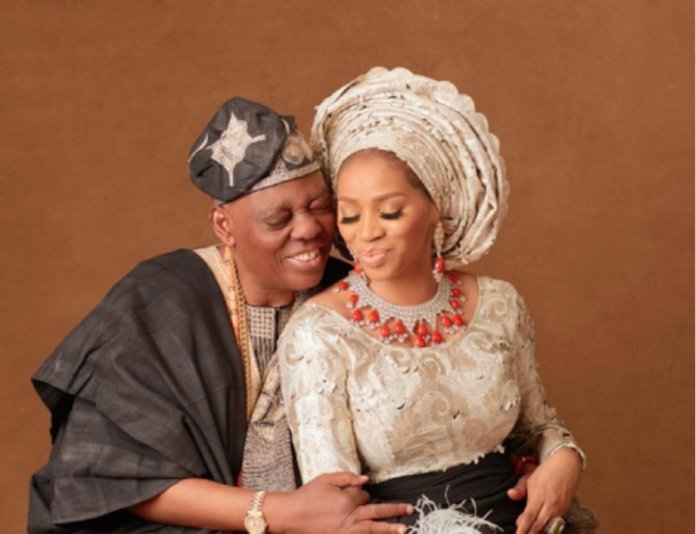 In his palatial home, all that glitters is gold. The glamourous incandescent chandelier suspended in the air towers and glimmers. The decor of the living room spreads out in resplendence. Warmth and wealth fill the air. The elevator takes you up in a glitzy glide, smooth and steady. The air of elegance fills your lungs. You inhale and your eyes are dreamy. You feel you’re in a dreamland surrounded by riches and richness. But it’s not a dream. The elegance and extravaganza are real. Welcome to Oluwa Ni N Sola Estate and the home of Chief Razaq Akanni Okoya. Yet, the surreal but beauteous adventure has just begun, as Funke Olaode relives the episodes of Chief Okoya

Fortune. Fame. Fortitude. Forbearance. The extraordinary quartet that defines Chief Razaq Akanni Okoya’s graceful and glitzy growth spanning eight decades. Chief Okoya has become an unputdownable book filled with exciting pages of riveting plots. Fabulously rich, extravagantly wealthy, Chief Okoya excites the minds and hearts of people. The glint in his eyes, the warmth of his countenance and the peace in his voice say it all. Dressed to the nines, it’s a big day for the big man.

For him, 80 years have become like a moment’s stroll in the park filled with lush greens and happy people. With a persona that commands awe and adulation, Chief Okoya makes riches look even richer. His expansive smile reveals his sparkling white set of teeth as he sinks gracefully on a couch in one of his living rooms. His young children are beside him. The lurking glint in his eyeballs tells you mortals like him are a rare special breed. You want to hear him speak; everyone in the room does.
“Age and passage of time have slowed me down,” Chief Okoya says with a jot of a joke in his voice. No one really believes him for good reason.

Yet, the inventive and positive billionaire industrialist adds, “And even as I turn 80, my prayer is to enjoy good health, long life and leave the legacy of my industry behind as I want Eleganza to outlive me and continue with my philosophy of philanthropy.”

Regal and resourceful, the octogenarian knows what he wants in life: for him, life begins at 80.
But before he clocks 80 today, he was 79. You can even roll back the years to when he was born. What you don’t want to miss is when fortune began to smile on him.

“My breakthrough in business came at the age of 19. I had built a house at Surulere,” Chief Okoya reveals with a sense of rich humility. That’s a sentence in the story of his life.
By the age of 21, he boasted of four houses at Surulere. At about 34, he had acquired a property on Ikoyi Crescent; four hectares of land in the heart of Ikoyi. By the time he clocked 40, two high-rise buildings had been added to his name.

In all this, the grace with which he acknowledges the eventuality of death is inspiring.
“Death is certain and whether we like it or not we must all go one day,” a philosophical Okoya notes. “When you cross 80 you are just in the ‘waiting room’ like a departure lounge. You only pray to God to live long and in good health.”

A dynamic Nigerian, Chief Okoya is the poster boy of an entrepreneur with an enduring enterprise. He is the king of entrepreneurs and industrialists in Nigeria. That can be considered as an understated point. For those who know, the Eleganza Empire is like a utopia many Nigerians want to live in for a moment. Okoya has lived in that real-world he created.
An enigma, the Aare of Lagos inhabits a world that shimmers in style as an industrialist and a philanthropist. With him, the world of business will appear like a piece of cake. Here’s what he thinks.

“Honesty, focus, determination, self-belief, and passion for what you do are key ingredients to being successful and wealthy,” Chief Okoya explains. There’s something else.
“When I started out I guarded my resources jealously because I believed as an industrialist the money might come in volume and once you are determined to put the money back into that business and you don’t waste it you will see the result.

“I have been busy all my life with business, construction, trading to the extent that I didn’t have time for social life at the initial stage. And to have sustained all this over the last six decades is by commitment, hard work and the grace of God,” Okoya discloses.
An understated legend in Nigeria’s business world, the shrewd billionaire believes success isn’t elusive to those who dare.

“As a businessman, you have to be dynamic. As an entrepreneur, you have to be dynamic and embrace innovation. That is the only vehicle that will keep you going,” he advises.
“For instance, I started with one item and over the last six decades, we have metamorphosed. From selling tailoring accessories such as buttons and zips to the manufacturing of coolers and later dabbled into real estate. Today, we are producing weave-on for ladies. We produce soaps, chairs, etc.”
The beat never stops for Okoya. He dreams it. He goes for it. Most of the time, he achieves it in a grand style. The eloquence of his wealth belies that. A man of immense wealth and wisdom, his reflection on life is that of gratitude and future ambitions.

Born on January 12, 1940, admits life has “treated me nicely”.
His parents were instrumental in his personal fame and fortune.
“In terms of experience, my father did a lot. I learnt how to trade under his tutelage. Spending time with him after school hours each day really helped. That was how I learnt how to sell buttons, zips to the extent that I began to make orders from Japan,” he recalls.
That was way back in the 1960s.

Chief Okoya adds, “My mother helped me in paying the deposit for the first order and she had been a source of support since then. I’ve been waxing stronger for over 60 years and I haven’t looked back. From that small beginning, I went into trading and later became an industrialist.”
Chief Okoya and Eleganza’s fame are beyond the shore of Nigeria. His story and that of his business empire have been told several times. An ingenious industrialist, Okoya pioneered the production of household items like flasks, coolers, writing materials and other products. His enterprise has even expanded further today.

From Iganmu, Apapa, Ikeja to Lekki and Ibadan, Chief Okoya’s magnificence becomes even magnified.
He knew he wanted to be wealthy in life. But did he plan to be rich in grandeur?
“Maybe not up to this extent,” the billionaire industrialist admits.
“But at that time, my father was a very good tailor with a brand new car, five houses and a lot of apprentices which could be an inspiration for a young man. Yes. I knew I would be somebody when I started out but not of this magnitude.”
Despite the vicissitudes of old age, his steely resolve remains. One of his beautiful dreams lie very close to his heart.

“It is my dream to see Eleganza Industrial City blossom. The factory is built on 35 hectares of land in Ibeju-Lekki. It’s well-equipped. This factory is still part of my dreams. This is where my passion lies. I’m an industrialist,” a self-confident Okoya says.

The man of immense wealth is further strengthened by a woman -his wife, Shade -that brims with beauty, brain, and bravura. If Chief Okoya decides to slow down, it’s because he’s got Shade by his side.
“In the next two years, I may quit or slow down. Luckily, I have a younger wife, Shade, who is interested and committed to this dream as well. She is always in the factory from 7 am to 7 pm. I have worked throughout my life. It’s time to relax,” Chief Okoya reveals.

To the moneybag, a good carpenter can’t sew a fine cloth. It is little wonder that he stays out of politics.
He provides an insight saying, “As I always say, a good carpenter cannot sew clothes. I am a good industrialist. God has helped me thus far. Although some politicians are my good friends, I don’t know much about politics.

“I am doing God’s will where he has positioned me. I am too busy with my factory to think about dabbling into politics. It has never crossed my mind.”
At 80, Chief Okoya is still on top of his game. But you can feel the air of merriment, pleasantries being exchanged. Excited guests, friends, relatives, and well-wishers enthralled by the man who has been there, done that. Okoya’s eyes glow, his face shines. He flashes a smile and the birthday ‘boy’ cuts his cake. To be continued.