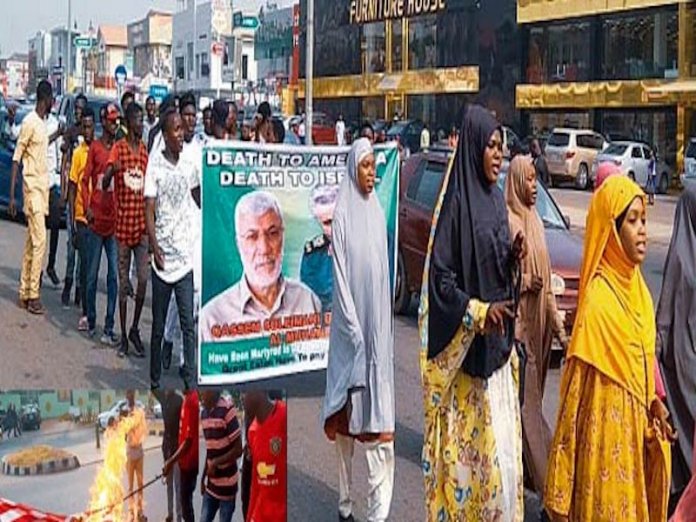 The police yesterday stepped up security in Abuja, the Federal Capital Territory (FCT), and its environs as protests over the United States’ killing of an influential Iranian General and Head of the Qods Force, Quasam Soleimani, seeped into the country.

The Inspector General of Police, Mr. Mohammed Adamu, had on Sunday put all members of the police high command on the alert to prevent a possible breakdown of law and order following the killing of Soleimani.

Members of the Islamic Movement in Nigeria (IMN) generally known as the Shiites, suspected of being affiliated to Iran, protested the United States’ last Friday drone strike that Killed Soleimani, burning the US flags during the demonstration in Abuja.

Their protest was in defiance of the appeal by the Nigerian Supreme Council of Islamic Affairs (NSCIA) against any planned solidarity march by Muslim youths across the country over the crisis.

The council pleaded with Muslim youths not to allow their emotions to becloud them to the dangers ahead.
Amid the tension in Nigerian over the Soleimani killing, the US has warned its citizens in Nigeria to be on the alert and take care of their personal security.

THISDAY checks showed that police patrol vehicles were positioned in strategic places within the FCT while stop-and-search operations were carried out at the entry points to the city, notably Gwagwalada, Zuba-Kubwa axis and Keffi-Nyanya-Karu.

Vehicles bearing riot policemen were also positioned at the entry points while combined police and military patrol teams along with some plainclothes security operatives were noticed at strategic locations within the city.

Further checks showed that there was increased security around the entry and exit points of embassies and foreign missions in Abuja.
THISDAY gathered that the security cordon would be in place for some time.

“Everywhere is calm so far but we are not taking chances. The arrangement (security) will be in place for some time. Every part of Abuja is under intense security cover for now. Our men and security resources are deployed in strategic places until further notice,” a top security source said.

Police Public Relations Officer, FCT Police Command, and Deputy Superintendent of Police (DSP), Mr. Anjuguri Manza, also told THISDAY that in line with the IG’s directive, the command had increased police presence in the territory.
“We have keyed into the IG’s directive. We have also deployed resources as a normal routine,” he said.

The Police High Command had Sunday issued a red alert to police formations across the country.
A statement issued by Force PRO, Mr. Frank Mba, said the IG had placed police commands and formations nationwide on red alert.
“This proactive measure follows intelligence report that sequel to the recent killing of an Iranian General, some domestic interests are planning to embark on massive public disturbances and sabotage.

“Consequently, Zonal AIGs and Command Commissioners of Police have been directed to ensure maximum surveillance and security of lives and property across the nation,” it said.
The police commanders were directed to ensure strategic deployments of both overt and covert police operatives to ensure adequate security and safety of citizens and foreigners, especially diplomats and diplomatic missions domiciled in Nigeria as well as the protection of critical national assets.

As expected by the police, the Shiites marched on the streets of the FCT over the Soleimani killing.
They marched through the major suburbs of Nyanyan, Mararaba and Masaka in the FCT and Nasarawa State to protest the US action, which has led to the escalation of tension in the Middle East about a possible Iranian response and further military action by the US.
During the protest, the Shiites echoed anti-US and anti-Israeli chants.

They also burned the flags of both countries, describing the Americans and the Israelis as enemies of Islam.
But the spokesman of the group, Mr. Ibrahim Musa, denied knowledge of the procession.
“I am just hearing it from you. I am not aware of that,” he said.
However, in a statement yesterday by NSCIA spokesman, Mr. Aselemi Ibrahim, the council said it believed that the present diplomatic impasse between the United States and Iran over the latest crisis could only be deescalated through the engagement of bilateral dialogue between both countries.

It urged Nigerian Muslim youths not to breach public order over the crisis.
“The attention of the leadership of Nigerian Supreme Council for Islamic Affairs (NSCIA) has been drawn to a planned solidarity march by some Muslim youths in the country as a way of venting their anger over the killing of a top Iranian commander, Gen. Soleimani Quseem, in Iraq. Although protests are an integral part of civil democracies all over the world, yet, the council believes that the timing is wrong as it could lead to loss of lives,” NSCIA said.

US Warns Citizens in Nigeria on Personal Security

The US has, however, cautioned Americans to reconsider or review their personal security measures while travelling to or across Nigeria.
The warning by the US Mission in Nigeria, which was posted on its website and dated January 3, 2020, may not be unconnected with the killing of Soleimani.

Though, the US government stated that it had no specific security threat information at the moment, it advised US nationals in Nigeria to stay alert in public places.
“Due to recent world events, U.S. citizens should review their personal security measures. While we have no specific threat information, it is prudent to remind ourselves of the following personal security actions to follow on a regular basis.