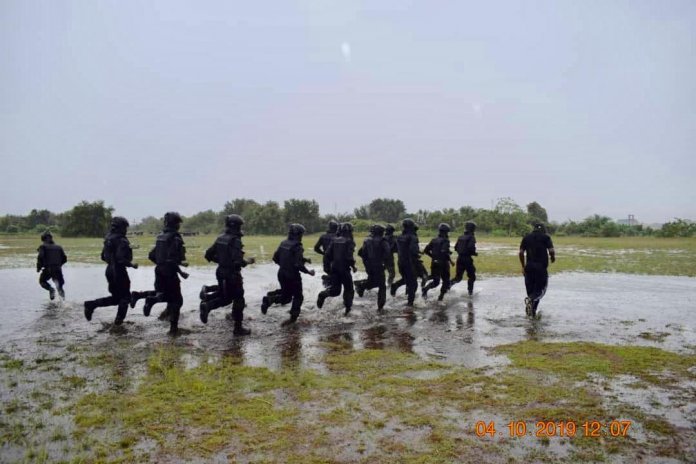 Chiemelie Ezeobi writes that no fewer than 23 members of the Nigerian Navy Special Boat Services were recently trained on asymmetric warfare, all tailored toward confronting emerging threats and protecting the nation’s territorial integrity

Navy Seals are trained to be able to operate in all environments, sea, and air and land, even though they are part of the naval force. The Navy Seals in the United States are the navy’s principal special operations force. Its equivalent in the United Kingdom is the Special Boat Service (SBS), a special forces unit of the UK’s Navy, which is drawn from the Royal Marine Commandos.

For the Nigerian Navy (NN), its special forces are also known as the Special Boat Services (SBS), and they are trained to carry out the most delicate of operations. The SBS although predominantly focused on littoral and riverine operations, are not restricted to carrying out other covert operations.

Simply put, a navy seal is as a member of the special forces unit who is trained for unconventional warfare and combat situations

on air, land and sea. These operatives perform secret missions that are carried out behind enemy lines, conduct counter terrorism operations, participate in direct warfare, and capture or eliminate enemy targets.

Modeled after its US, Israeli, UK counterparts, the NN SBS is no different as they are trained to operate on land, sea and air. Established in 2006 to deal with new unconventional threats like counter insurgency, hostage taking, piracy, oil and gas platforms seizure.

To groom operatives that are capable of handling such threats was the reason why the Basic Operating Capability (BOC) Course  was borne. Now in its 15th course, the BOC Course which runs for about 24 weeks is not for the faint hearted as it ensures the graduands have proven their mettle and demonstrated that they have the mental tenacity and physical toughness to carryout the duties that would be assigned to them.

In the course of their training, they are expected to expend thousands of ammunition, swim for kilometres, performed countless hours of high intensity work outs and in the midst of it all, lost hours of sleep to get their bodies and brains to be physically fit and mentally alert, respectively.

While the physical conditioning as the name suggests deals with getting the body fit by pushing it through extreme tasking physical trainings, this is where most operatives drop out.

The maritime warfare phase on the other hand deals with operations like the navigation and survival swimming, insertion and extraction for boat operations, counter insurgency  and contact drills for riverine warfare, combat diving and Visit Board Search and Sieze (VBSS) Operations at sea.

The last but not the least phase is the land warfare which entails explosives and demolition, weapon handling and range qualification, map reading, Intelligence, Surveillance and Reconnaissance (ISR), ambush and raids, map reading, Close Quarter Battle (CQB) and Hostage Rescue and Fighting in Built Up Areas ( FIBUA).

This year, the BOC Course 15 saw 53 operatives sign up from both the NN and the Ghana Navy (GN) but only 23 made it to the final stage. The operatives signed up for a 24-week intensive training on watermanship, air assault, counter terrorism, tactical combats, among others. At the end of the training, they were adjudged ready and equipped with the ability to infiltrate hostile terrains from the sea, land and air whenever the need arises in different theaters of operation.

At the SBS camp in Navy Town, Ojo, Lagos, the new graduands displayed all they were taught in various simulations to the applause of all seated. From the VIP protection to the hostage rescue, to counter terrorism, sabotage and infiltration of enemy KPs.

Addressing the remaining 23 personnel of the force during their graduation in Lagos, the Flag Officer Commanding (FOC), Naval Training Command (NAVTRAC), Rear Admiral Stanford  Enoch said the personnel that stayed and completed the training had proven their mettle and have demonstrated they have mental tenacity, physical toughness and the will consistent with special operation forces around the world.

Enoch said that the objective of the SBS training is to build capacity to deal decisively  with asymmetric threats and to confront emerging threats towards providing the required security in the nation’s maritime environment and other parts of the country.

He applauded their training, saying that, “every component of your training module was carefully drawn to build you into an efficient and coherent fighting force as well as to prepare you to face serious duties ahead in your various navies and your nation at large.

Adding that the NN understands the complexities and fluid nature of the current security posture of Nigeria and the need to develop special capabilities to address the emerging challenges, he said the navy will continue to wide range of operations in the foreseeable future, including military aid to civil authority, and civil aid to civil power.

He also said that these wide range of operational engagement are in furtherance of the forces total spectrum of maritime strategy for maritime Defence which covers five layers- the backwaters, territorial waters, the Exclusive Economic Zone (EEZ), out of area operations and land operations.

“To effectively cover the total maritime spectrum would require the NN to develop extra capacity and capabilities as well as the use of special operating forces hence the need for the intensified training of the SBS,” he stressed.

Charging the graduands, he said they need to sustain the same drive in the field in order to justify the investment made in the training. “Also, take advantage of all that you have learnt here and bring it to best in your navies whenever the need arises, especially at this time when the national aspirations of many nations including Nigeria are being threatened by numerous security, economic and social challenges.

He also commended the Chief of the Naval Staff  (CNS), Vice Admiral Ibok-Ete Ibas for the investment in infrastructure, teaching aids and the continuous financial support to NAVTRAC and indeed the NNSBS in the achievement of its mandate.

Earlier the Chairman, House of Representatives Committee on Navy, Honourable Yusuf Adamu Gagdi, also commended the SBS for their demonstration of what the unit can do when confronted with serious threats.

He said with what he had seen, he was convinced that the budgetary requirement of the force needs to jacked up to ensure that personnel are properly trained and be made ready to defend the country against external threats.

He further pledged to work to ensure that all the budgets of the navy are approved and that he will also ensure that funds released gets to the people who needs it.

Also speaking, SBS Commander, Commodore Noel Madugu, said the BOC Course 15 has further strengthened the existing military cooperation between the NN and the GN, adding that this in itself is an addition to the numerous achievements the SBS has achieved over the years.

He said: “The overall objective of the BOC is to train officers and ratings of the NN to be able to operate in small organised units and also are equipped with specialised skills required to operate in multidimensional threat environment. The course therefore centered on riverine operations, land warfare, special tactics, guerrilla warfare as well as other contemporary operations.”

While congratulating them for lasting 24 weeks he added, “no doubt, it has been a challenging period but I am sure you have been well equipped with skills required to succeed in today’s dynamic battle space where the adversary equally well prepared. However, I am confident that you would rise to the occasion when the need arises.

“To the SBS training team, I say well done for your contribution to the success of this course and making BOC the warriors that they are today, through your commitment, dedication and hardwork”.

Also commending their respective families for their encouragement and support for graduands during the course he added, “I congratulate the graduands as you are going to be inducted into the warriors club and your career as special force operatives begins. So go with confidence and conquer your foes.

“They underwent special trainings which are not for just any officer. The training they got is of higher standard and equates those of other elite forces anywhere in the world. Those previously trained by the SBS have proven themselves.

“The Chief of the Naval Staff  (CNS), Vice Admiral Ibok-Ete Ibas has been very gracious to the SBS. He has special liking for the special force and has within available resources, ensured that most of their needs are met.”

The ceremony was wrapped up with some of the operatives who had distinguished themselves during the training being awarded with honours, just as all the participants received their certificate of participation.