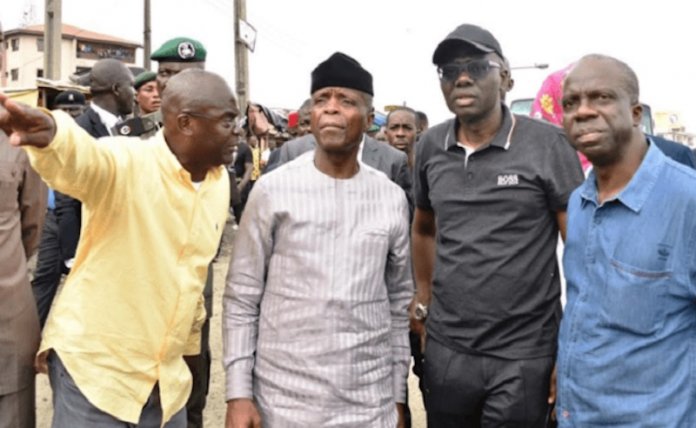 Despite the recent intervention of Presidential Taskforce on the Restoration of Law and Order in Apapa, Vice-President Yemi Osinbajo yesterday acknowledged that traffic congestion and environmental nuisance in the business district were still a huge challenge.

Osinbajo noted that the Apapa and TinCan Island Ports were constructed “to handle 34 million tonnes of cargo. But they now handle over 80 million tons of cargo,” which by implication represented an increase of 235 per cent above its original capacity.

He gave the figures at a session with journalists after inspecting traffic sore points in Apapa and its environs, noting that with improved infrastructure and effective call-up system, traffic congestion in the axis would be resolved.

Soon after the 2019 general election, the federal government had constituted the presidential taskforce to intervene in the Apapa traffic congestion, which had culminated in the deterioration of law and public order in the axis.

The taskforce, which was mandated to restore order in Apapa within three weeks, could not effectively accomplish its core mission, forcing the federal government to extend its time of operation by two additional weeks expected to elapse this week.

With the expiration of the taskforce’s ultimatum, the vice president inspected Apapa’s traffic sore points and admitted that the gridlock was still a huge challenge, citing space constraint, infrastructure deficit and ineffective call-up system as major difficulties with the business district.

Osinbajo however observed that with federal government’s commitment to improving infrastructure and ensuring effective call-up system within the ports, the traffic challenges would be resolved in no distant future.

“I think the most important thing is what we are trying to do right thing now. We will improve the infrastructure in Apapa’s port areas. We’ll also improve the call up system so that there will not be much pressure within the ports.”

He noted that the main cause of the gridlock experience within the ports was lack of space, because the ports have been overstretched lately, noting that the presidency was pained by the challenges resulting in its plan “to embrace intermodal system of movement within the ports to ease travel time.”

He acknowledged that the Mile 2 wing of Apapa “still has difficulty,” though claimed that the federal government had been responding to the challenges experienced by motorist, especially within the Mile 2 end of the Apapa-Oshodi expressway.

He assured motorists and residents that in a few days from now, the gridlock “will ease. The Mile 2 end is the axis where we think that there are still difficulties. With what I have seen, I am quite pleased with the pace of work done. But there are some aspects that still required some speed to achieve the best within the axis.”

In the next couple of days, Osinbajo reiterated that the gridlock “will be resolved especially with the opening of the Tin Can Island trailer parks and the palliative work that is ongoing all the way to Mile 2. Hi-tech Construction Company is handling. We should be able to resolve that congestion at the Mile 2 end.

“You will see that the entry route to the port has been cleared. So, we need to understand that there are short-term, mid and long-term solutions. One of the mid and long term measures is to decongest the cargo Traffic coming into the port.”

He also attributed difficulties with traffic flow in Apapa and its environs “to inadequate space. We need to understand that this is a port that was designed to take 34 million metric tonnes daily but is currently taking over 80. With this, it is obvious that there is need to find alternative quickly.

“This is a very busy port which was signposted by the fact that the country is a very busy place for commerce. So, Traffic is bound to increase and we think that we will be ahead of the issues that could further arise with the way we are going.

“The most important thing we all need to understand is that congestion is caused by the space constraint. The way to sustain the level of improvement already achieved is to address those major concerns. It will be sustainable.”