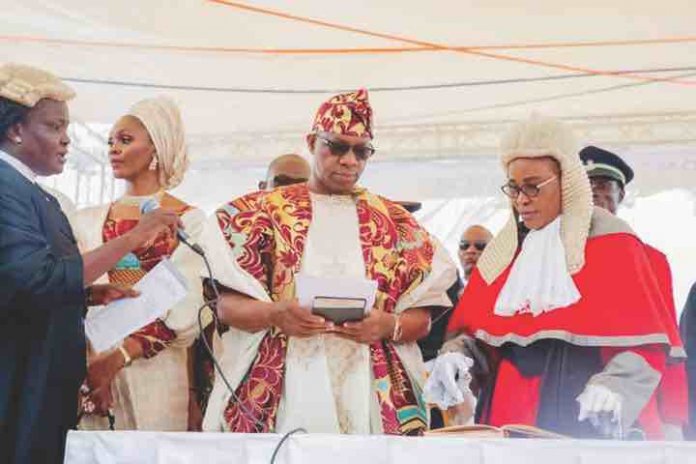 Femi Ogbonnikan writes on the activities that marked the inauguration of Prince Dapo Abiodun, as the fifth democratically elected governor of Ogun State, and his promises to the people

Upon his emergence as governor-elect of Ogun State, Prince Dapo Abiodun promised to swiftly execute the programmes in his policy document, aimed at alleviating the poor living condition of the people of the state.

Abiodun has pledged to make a marked difference in all facets of human endeavours, by lifting low morale among civil servants, improving the deplorable condition of roads, virtually everywhere, attending to the sharp decline in education standards, poor healthcare services, and other decadence.

He has since hit the ground running, after his inauguration. Coming from the corporate world and having sat atop leading indigenous companies like Heyden Oil and Gas and First Power Limited, among others, Abiodun is accustomed to life of luxury.

During one of his electioneering campaigns to communities in the state, the governor was confounded at the deplorable condition of Atan and Erunwon communities, both in Ijebu North-East Local Government Area, and with the condition of the road from Ilara to Isara through Akaka, in Remo North Local Government Area. His vehicle and others in his convoy, including those of party chieftains could not access these roads. He and his loyalists had no other option than to take a walk, with the vehicles parked by the road side.

He paced back and forth and expressed displeasure at the negligence that has resulted in the underdevelopment of these communities that have been cut-off from the rest of what is known as the modern-day Ogun State.

Expressing displeasure at the poor state of these roads, Chief Bode Mustapha, former Director-General, Ibikunle Amosun second term re-election campaign organisation in 2015 and now a close associate of Abiodun, berated the immediate past administration of Amosun for the untold hardship caused residents of these communities.

He said: “I remember when we went to campaign; I think it was in Atan. And we had to go through Erunwon, in Ijebu North-East Local Government Area. I passed a comment, that if a pregnant woman was taken through this road, she would be forced to go into premature labour. And it is the same way all over the state.”

Former governor of the state, Otunba Gbenga Daniel said Amosun only concentrated on white elephant projects in Abeokuta to the disadvantage of the other cities and towns in the state.

At a get-together event, Heritage Club of Ijebu organised to honour the governor, at the Awujale Palace, Ijebu-Ode, on Saturday, June 8, 2019, Daniel said: “Regrettably, it is a fact that some of the bridges are misplaced priorities; there are no traffic jams to justify some of the dual-carriage ways and that may not be in the future. If these same amounts were utilised in doing internal roads and new roads, even in the same location, the economic impact would have been enormous in those locations.”

Poised to restore the lost glory of the state, Abiodun, in an address at his inauguration made a solemn pledge to right the wrongs of the past.

According to the governor, “The well-deserved victory we celebrate today is sweet. The mandate is sacred and treasured. But the path to this moment was rough and the ride was bumpy. No leaf can fall from a tree without the permission of God Almighty. He sometimes achieves His will for one through the support of other men and women of Goodwill and, inexplicably, through opposition of others, even from unexpected quarters.

“But the will of God will always prevail. With that at the back of my mind, my appreciation goes to all, without any ill-feeling whatsoever. I can assure all and sundry that the government under my watch will be people-centred.

“This government will be our government, not their government. I have experienced ups and downs of life, like any of you. I can relate to your challenges. I can identify with your dreams. You want a government that works for you, and not for cronies and families.

“Let me pledge, once again that I, Adedapo Abiodun, will keep faith with the people; I will lead with integrity and sincerity. My administration will be fair, just, equitable and inclusive. I will govern with character; I will serve you diligently and sincerely; I will make your interests the core of governance; I will neither personalise nor abuse the mandate; and I will not betray your trust.”

Abiodun didn’t betray emotions, as he relayed his harrowing experiences, culminating in his emergence as governor, to the astonishment of the congregation.

He said: “I remain a living testimony to the awesomeness of God and the fact that with God all things are possible.

“The Lord Bishop, Rt Rev Emmanuel Adekunle, I have listened very carefully to your testimony and to all the details of the advice you have given us and your extracted words from my inaugural speech, I want to assure you that we will live true to our words. We will be accountable; we will be transparent; we will be responsive, equitable, effective and efficient. We will follow the rule of law, we will be participatory; and we will be inclusive in governance.

“During our campaign, in the course of going around the 20 local governments in the state, it gave us the opportunity to identify what was largely responsible for the gaps between the government and the governed.

“We realised the fact that what was common to our people was the decay of the rural and township road infrastructure. So, we made a commitment which we have emphasised over and over again that, at our assumption of office, our priority will be to immediately look into how to upgrade, rehabilitate, repair and restructure our township roads.

“We appreciate the fact that most of our citizens are rural and township dwellers, and as we know, it is important that state capitals and towns should look befitting. However, for our people who live in the rural areas, all they want to do is take their produce from the farms to the market.

“We have decided as the Lord Bishop has recalled that, we are resuscitating the Department of Public Works (DPW), which used to be called OGROMA. We have immediately commenced the enumeration of all the roads across the state that need repair. The reason we are choosing to do so is to begin this work speedily without the need of having to award third party contracts. “At the same time, it will also allow us to develop and empower the local economy. It will stimulate the local economy. So, if the rural or township road goes through a particular area and we are able to involve those that are in that catchment area in the supply of needed materials or labour etc, it will be our own way of stimulating the local economy.

“So, we have enumerated the list of these roads and we have sent them back to their local governments and we requested that they tell us which is their priority and by so doing we are also involving them in decision process. So, it won’t be that we are repairing roads that are not their priority.  So, in no distant future, you will begin to see activities in your backyard, because we will have work gangs in Ijebu Ode, Ilaro, Sagamu, Abeokuta, Ota and Ifo.” 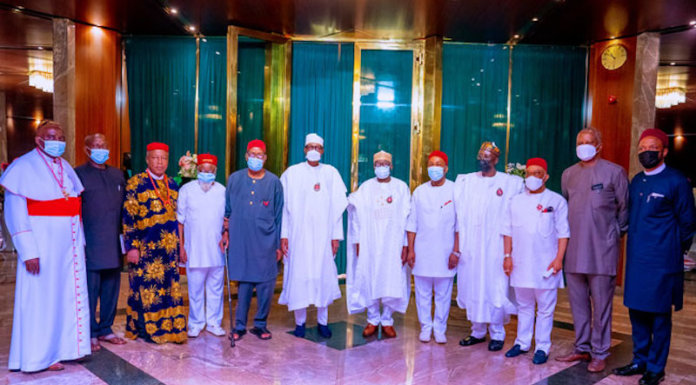