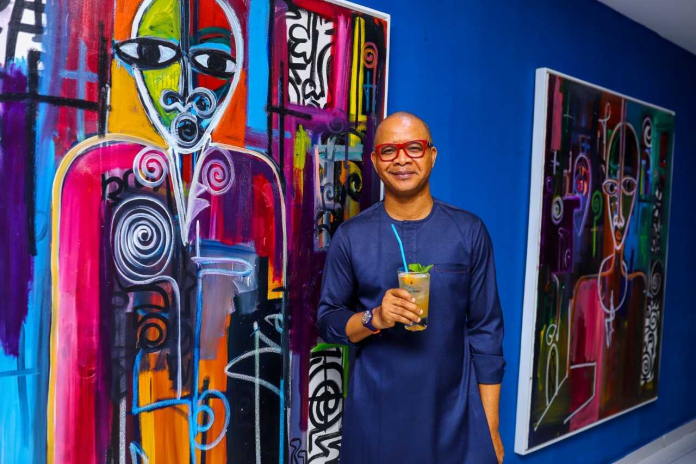 Champagne glasses touched lips as light conversations flowed from the different clusters of art enthusiasts gathered at Rele Gallery, Onikan. It was a roll call of ‘who’s who’ in the creative industry which is no surprise at all given the persona of the interdisciplinary artist and writer, Victor Ehikhamenor, one of the finest forward-looking artists of Nigerian origin. Born in Udomi-Uwessan, Edo State, he was of the first four artists to represent Nigeria at Venice Biennale in 2017.

The buzz for this Lagos show was huge; quite commensurate with the artistic offerings on display. It was Ehikhamenor’s first solo show in eight years, loaded with African aesthetics, catholism and elements of social realities. Large paintings rendered in vibrant hues drew attention away from the creamy liquor pouring on the rocks tucked away at the side bar and from the charming German gentleman who was very keen on his rum-antics. Titled, “Daydream Esoterica’’, the show paraded some paintings that serve as a visual excursion into the city’s dreams and frustrations. Like the Johnnie Walker’s blending effect of citrus and fragrant almonds, the mixture of western religion and an African worldview in Ehikhamenor’s pieces allows the viewer to have a rich taste of the artist’s childhood as well as his informed and inquisitive mind.

Some of his installation pieces are made from Catholic prayer rosaries using paper-perforation techniques. One prominent work at the show is “We the People and Other Dreamers,’’ alluding to the opening lines of the US constitution. It showed five figures- perhaps a hint on the racial diversity upon which the American state is founded; resonating with Nigeria’s multi-cultural existence. Other oil on canvas works include “Divine Dreamer”, “Celestial Dreamer”, “Penitent Dreamer”, “Revered Dream Sellers of Lagos” and “Righteous Dreamer’’.

The viewer can choose to be immersed in the subtle wit in “Interpreter of Deferred Reveries’’ or be enthralled at the sight of the site-specific installation called the “Daydreamer’s Paradise”. Ehikhamenor told his guests at the show of how he was inspired by the fond memories of his childhood wherein festive periods were marked by accessories for the season. During Christmas holidays, children would don the Christmas goggles, gallivanting around with friends with an empire state of mind. That was the experience within the walls lined with an assortment of eye wears of various colours matched beautifully with psychedelic lights that gave the disco effect. It was a glorious selfie moment. Snapshots. Camera flashes. That mix of classic and contemporary is reflective of the core values of the Johnnie Walker and its signature smoky finish. This show runs till June 30.