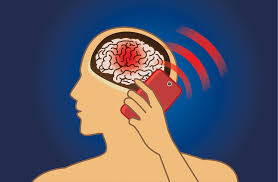 Dr Biodun Ogungbo is a brain and Spine Surgeon.As an expert, must trust the  information contained in the piece which he graciously forwarded to me and permitted me to publish for which I am eternally grateful. Read it. Internalize it and take a second though on how you use your mobile phones – Mobile phones can cause brain cancer .Okay, this is not a joke.   This is not a topic to profess ignorance about or say, ‘I did not know’. Just go with the flow and say, ‘Mobile phones can cause brain cancer’. Simply because you don’t want to find out the hard way!   Experts believe there is a strong association with prolonged usage of mobile phones especially people who have been using the phones for over 10 years. The risk is also significant in children with their growing and immature brains.  It had been predicted that the numbers of patients with newly diagnosed brain cancer and other tumours will almost double by the year 2025. Many countries are seeing an increasing incidence of these horrible tumours now and it’s a worrying trend.

Okay, this is not a joke.  Glioblastoma Multiforme – We have and are seeing a rise in the numbers of people suffering from high grade brain cancers. These are the types of cancers that defy cure. These cancers especially the horrible one called Glioblastoma Multiforme or GBM for short is incurable and kills 100%. This cancer kills the young or the old though it appears more common in patients in their early 60’s. The numbers of sufferers increase with age and it is more common in men.   The risk is real and prevention is the main treatment for cancer. Cancer prevention is action taken to lower the risk of getting cancer. This can include maintaining a healthy lifestyle and taking medicines or vaccines that can prevent cancer from developing. Avoiding exposure to known cancer-causing substances such as sugars, cigarette and now mobile phones is vital.

Studies upon studies Okay! studies are conflicting and contradictory. Some will find a link and others will not. The risk may be tenuous at best but so what. The American Cancer Society Exit Disclaimer (ACS) states that there could be some cancer risk associated with radiofrequency energy, but the evidence is not strong enough to be considered causal and needs to be investigated further.  Brain tumours are particularly difficult to study, for example, because of their high death rate and the short survival of people who develop these tumors. Similarly, patients who survive initial treatment are often impaired, which may affect their responses to questions. Furthermore, for people who have died, next-of-kin are often unable to accurately describe their patterns of phone use to an interviewer.

Prevent cancer- Individuals who are concerned about radiofrequency energy exposure can limit their exposure, by using an ear piece and limiting cell phone use, particularly among children. The Food and Drugs Administration (FDA) has suggested some steps that concerned cell phone users can take to reduce their exposure to radiofrequency energy:  Reserve the use of cell phones for shorter conversations or for times when a landline phone is not available. · Use a device with hands-free technology, such as wired headsets, which place more distance between the phone and the head of the user. Hands-free kits reduce the amount of radiofrequency energy exposure to the head because the antenna, which is the source of energy, is not placed against the head. Exposures decline dramatically when cell phones are used hands-free.

Okay, this is the score -The decision to limit the use of phones and especially to use a hands free device is entirely yours. You must take the decision to prevent mobile phone causing you a brain cancer.  Other issues- There is now strong evidence that the rate of fertility is reducing in many communities around the world. The volume and quality of sperms produced by men is reducing and some feel that it may be not unconnected to mobile phones and computers close to the genital areas in men.  Certainly, fertility centres such as Nordica Fertility centre in Abuja have found an increase in the abnormal sperms seen in specimens and a decrease in the motility.  Mobile phones are a great resource and a necessary evil but you have got to take care.  Okay, now you know. Here ends the piece by Dr Ogungbo which I find too rich and interesting.

I must thank Dr Ogungbo for his quick approval to use his lovely and timely piece which is an eye opener for me even though I feel very guilty for procrastinating on the use of this information since last year when my friend and brother Patrick Adenusi of Safety Beyond Border, a Non -Governmental Organization on road safety alerted with me on a news item on CNN on the same subject. I told myself I must share the stuff but missed out until Dr Ogungbo sent me the material. The decision to limit the use of phones and especially to use a hands free device is entirely yours. I must confess that I got fascinated yet scared when I read through the section on Gliobladtoma multiforme which he said is incurable and kills 100percent. More scarier is the information that it appears more common in patients in their early 60’s and that it is common in men.

I do hope that men, those in their 60’s and drivers generally will take special interest in their God sent information. For me I have taken lessons that will no double guide in my usual use of ear piece or blue tooth which in our clime is seen is show off. Now I have a better understanding of why nine out of ten mobile phone users in some climes outside our shore have become addict in the use of hands free. I hope you will not mistake me for recommending that you go about driving and using hands free since the National Road Traffic Regulations does not allow the use of hands free while driving because of the inherent risk involved. The provision is meant to guard against the risks inherent in distracted driving which is a leading factor in many crashes, and cell phone use and texting are two of the most common distractions.