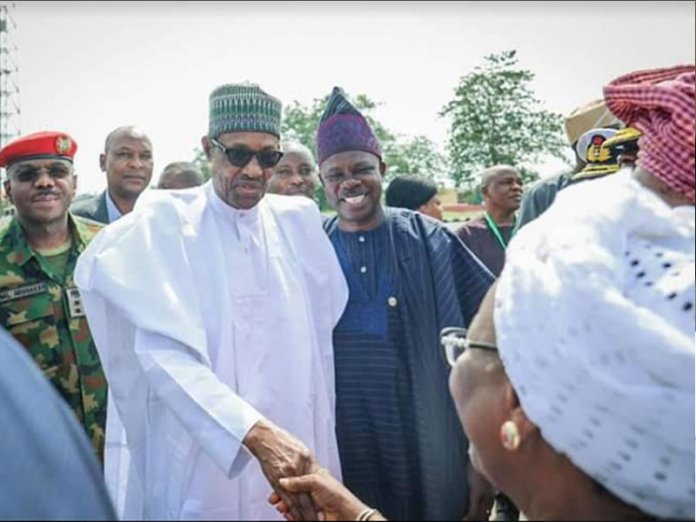 The projects are the Ogun Judicial Complex, along Kobape road, the 10,000 – seater capacity Amphi-Theatre at Oke-Ilewo, the Kampala/Adire mall at Itoku and the Ogun State Television Digital Studio along Ajebo road, all in the state capital.

The president also inspected the ongoing construction of 250-bed ultramodern hospital at Oke-Mosan.
At the commissioning of the Judicial Complex, Buhari described the projects as first class and in tune with international standard.

The President, who emphasised the importance of infrastructure towards the socio- economic development, commended Amosun for saving and committing resources to infrastructural development.

He said that the projects and the way Amosun had christened them were suggestive of the fact that the governor had prepared ahead of the day he would leave office.

“Judging from the projects that I have seen and the name that the governor has given them (legacy projects), I think he has prepared himself ahead to leave office.

“I congratulate him for having the foresight and saving resources to put the infrastructure in place to ensure his footprints remain permanent,” he said.

Buhari noted that God had elevated Amosun with his victory at the February 23, Senatorial polls in the state during which he won the Ogun Central senatorial seat.

He, however, expressed hope that Amosun would use the platform to further serve the people of Ogun in particular and Nigerians in general.

While in his opening remarks, Amosun commended Buhari for coming to the state for the event inspite of his busy schedules, particularly in the Ramadan period.

Amosun who recalled that Buhari laid the foundation of the Judicial Complex in February 2016, explained that the complex and other projects were made possible because of the enormous support Ogun enjoyed from the Muhammadu Buhari-led administration.

“We are grateful to the Muhammadu Buhari-led administration for considering our great state for the execution and implementation of many projects and policies.

“President Buhari has done very well not just for us in Ogun, but for Nigeria as a whole.

“We want to thank you for the construction of the Lagos-Ibadan Rail line which passes through Ogun state.

“We appreciate the economic policies of the federal government which has affected Ogun positively,” he said.
However, Amosun who declared that he had transformed Ogun to an enviable height, appreciated the people for their support throughout his tenure.

Speaking earlier, the Chief Judge (CJ) of Ogun state, Mosunmola Dipeolu, noted that the present judicial headquarters in Isabo had become archaic having served the state for over 40 years.

According to the CJ, the new complex provides great facilities and improved environment for adjudication.