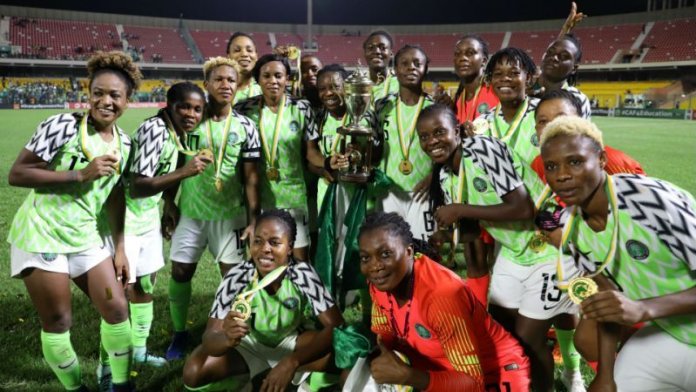 African champions Super Falcons departed the shores of the country yesterday for Austria, where they will set up a two-week residential camping before flying to France for the 8th FIFA Women’s World Cup taking place between 7th June and 7th July, 2019.

Dr. Sanusi congratulated the ladies on triumph at the WAFU Cup tournament in Abidjan and charged them to see it as a sign of great things to come in France.

“His Excellency, President Muhammadu Buhari (GCFR) has already congratulated you on your victory in Abidjan, which shows how much the whole nation appreciates your effort.

“I believe the triumph in Abidjan will spur you to greater things at the World Cup in France. As you go to Austria for the final camping programme and from there to the World Cup, I want you to go with the belief and confidence that you have the capacity to defeat any team in the world,” the NFF scribe noted.

While assuring the girls that all their entitlements before and during the FIFA World Cup will be paid by the federation, Sanusi challenged the girls to aim for a Nigerian record outing at the finals in France.

It is 20 years ago that we accomplished what remains our best performance at the FIFA Women’s World Cup – a quarter final berth in USA. It is time to write a new record, and I know that as you play Norway, Korea Republic and France in the group phase, this aspiration will be close to your hearts.

“No team can browbeat you. Rather, let them fear you by the confidence and ability that you show on the pitch.”

Head Coach Thomas Dennerby said he was edified by the comeback feat of the Falcons against host nation Cote d’Ivoire in the final of the WAFU Cup on Saturday.

“Scoring the equaliser in the very last minute of time-added-on showed the never-say-die, never-give-up attitude of the Super Falcons and I really, really love that. It means that this team has learnt to fight till the last second of every game and that spirit will be massive for us at the World Cup

“I want to thank the NFF for their huge support to the team since the team qualified for the World Cup, with all the friendly tournaments and campings that we have had. We will go to France to give our best effort,” stressed Dennerby.

Eight home-based players, alongside technical and administrative officials led by Coach Dennerby travelled aboard Air France flight to Paris, to connect the Austrian city of Bad Tatzmannsdorf, where they will perfect tactics and strategies at the Avita Resort before hitting France on 4th June for the World Cup finals