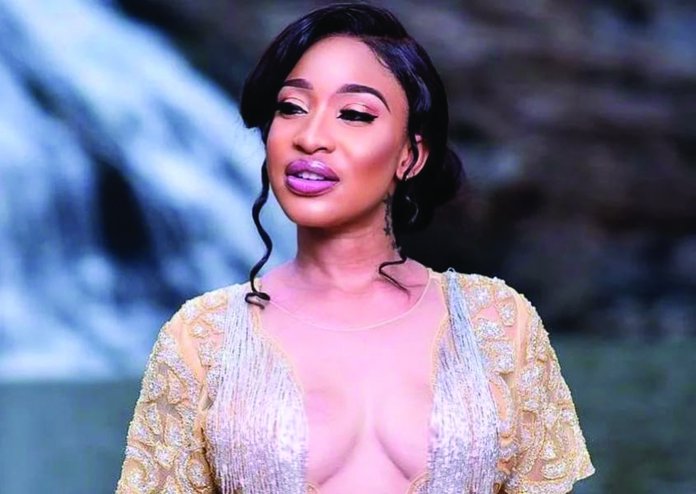 As part of her birthday package, controversial Nollywood actress, Tonto Dikeh, has expressed her desire to get a new pair of boobs, writes Ferdinand Ekechukwu

It is no longer news that controversial Nollywood actress, Tonto Dikeh, has made known her intention to undergo a body enhancement surgery as a treat for her upcoming birthday on June 9. Tonto has gone under the knife a couple of times to get her body “fixed.”  Recall that Tonto Dike had in 2017 undergone cosmetic surgery.

Back in 2018, the rumours of Tonto Dikeh’s visit to the plastic surgeons began to filter the air. It didn’t take long before she actually revealed that she indeed gone under the knife.

Tonto hinted her desire to get new pair of boobs for her birthday via her Instagram on Tuesday.  The 33-year-old had revealed that she had not been confident of her body. “My body has been something that I have always been extremely ashamed of,” she said. So, when you see her shine in her new look soon on her next birthday, don’t be surprised.

According to her, this going to be the one gift she would be presenting herself. “Dear lord Jesus, I have all I want for now…My birthday wish is that you make me schedule and that of Dr. Ayo align so I have my new boobs in Jesus name I pray!!,” she wrote on her Instagram page.

However, it is believed that the new boobs she was talking about might be additional plastic surgery to her mammary glands to enhance firmness.

Dikeh, born 9 June 1985, is also a singer and philanthropist. She hails from Rivers State and is of Ikwerre descent, a subgroup of the Igbo tribe.

She made headlines when she was featured in a movie titled “Dirty Secret,” which generated controversy among Nigerians due to its inclusion of adult scenes. While some people criticised her role for not being traditional and un-African, others stated that Dikeh was merely being professional. Dikeh was born into a family of seven and is the third of five children. At age three, she lost her mother and was raised by her step-mother, who has two children.