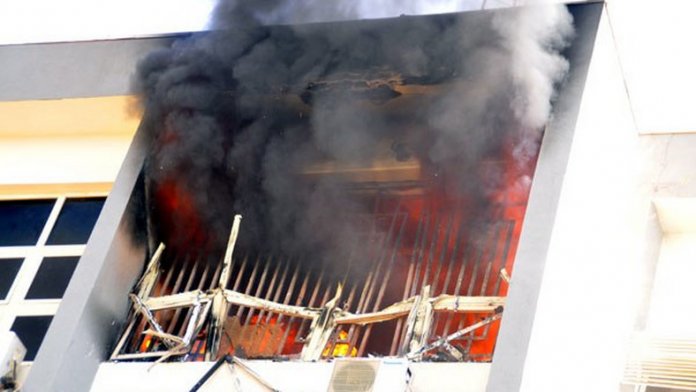 THISDAY gathered that the collation was being finalised when the angry supporters of a political party set the structure on fire.

The electoral officers were promptly guarded by security operatives as they moved the materials to the INEC office in the state capital.

There was also a bomb scare at Mbaitoli LGA’s INEC office earlier yesterday but security operatives quickly put the situation under control.

The collation continued at the centre amidst tight security.

The INEC spokesperson in the state, Emanuella Opara, said she could not confirm the developments because she had been deployed to a local government to function as an electoral officer.

She said: “If I were to be in the headquarters now I would have confirmed the report to you but I am here on the field working.”

The police spokesperson in the state, Orlando Ikeonkwu, said he would find out what happened and get back to our reporter.

But as at the time of filing this report, he was yet to call back and did not pick a call to his mobile line.

However, a party agent at the local government, who asked not to be named, said no damage was done to the official result already collated.

Armed thugs had on Saturday invaded many polling units in Ngor Okpala LGA and carted away voting materials including ballot papers, ballot boxes and result sheets.

Many INEC ad-hoc staff were also beaten up with their valuables, including mobile phones, wallets and bags lost in the process.