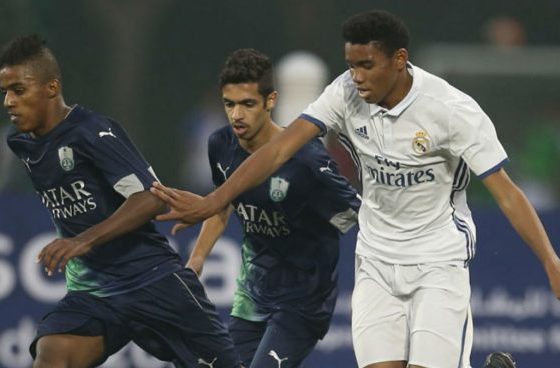 The Nigeria Football Federation (NFF), has never hidden its plan to woo players of Nigerian descent to the Super Eagles fold and Real Madrid attacking midfielder, Olawale Akinlabi Park could be the latest addition

The Nigeria Football Federation (NFF), was handed a boost in their pursuit of Real Madrid youth-teamer Marvin Olawale Akinlabi Park following his omission from the latest Spain U-19 roster announced on Tuesday.

According to Spanish tradition, footballers get two surnames; the first one is his fathers, the second being his mothers.

NFF First Vice President, Seyi Akinwunmi, had before now said Park would soon get to play for the Super Eagles despite interest in the Los Blancos youth team kid from South Korea and Spain.

Rather than be cowed, Akinwunmi said the NFF can convince a switch to Nigeria’s senior national by Park, who is eligible for three countries, as he was born in Spain to a Nigerian father and South Korean mother.

Akinwunmi said he has enough data about the attacking midfielder, which makes him sure that Nigeria can hook the fast-rising lad.

The NFF is set to do battle with the Royal Spanish Football Federation and Korea Football Association for the services of Park.

Born in Palma de Mallorca to a Nigerian father and South Korean mother 18 years ago, Akinlabi is spoilt for choice as he is eligible to represent Nigeria and South Korea based on the grandfather rule and can also turn out for his country of birth, Spain.

Marvin has been described by the official website of Real Madrid as a two-footed pacy and physical attacking-minded midfielder who is a danger when he joins the attack, and his ability in one-on-one situations also makes him a threat.

He had stops at Sporting Ciudad de Palma, Tranmere Rovers, La Salle and Es Jonquet Penya Arrabal prior to joining the European champions in July 2016.

Should Marvin pledge his international future to Nigeria, he would follow in the footsteps of Madrid-born Real Madrid product Derik Osede, who switched allegiance to the Super Eagles in 2015.

It reads, “An attacking-minded midfielder who is a danger when he joins the attack, his ability in one-on-one situations also makes him a threat. He took his first steps in the game in his native Balearic Islands and possesses a very direct style, which fully exploits his pace and power. He also has fine ability with both feet.”

Based on the potential of Marvin, the undefined will aim to integrate him into the national team as they have done for youngsters born abroad.

However, they should expect to face stiff competition from the Royal Spanish Football Federation and Korea Football Association who will want a talent such as Marvin in their ranks.

Marvin was not named in Real Madrid squad for their 2018/19 UEFA Champions League campaign.

However, Spain U-19 boss, Santi Denia, has not summoned Akinlabi for the friendly matches against Azerbaijan and Scotland scheduled to hold on February 12 and 14 respectively.

Spain are using the friendlies to prepare for the Elite Qualifying Round of the European Championship. Akinlabi will become provisionally cap-tied to Spain if he gets game time in next month’s competitive fixture with Slovenia but it remains to be seen if he’ll be invited after he was omitted from the latest roster.

It, however, remains to be seen if his non-inclusion to the Spanish side could spur his choice of playing for Nigeria.