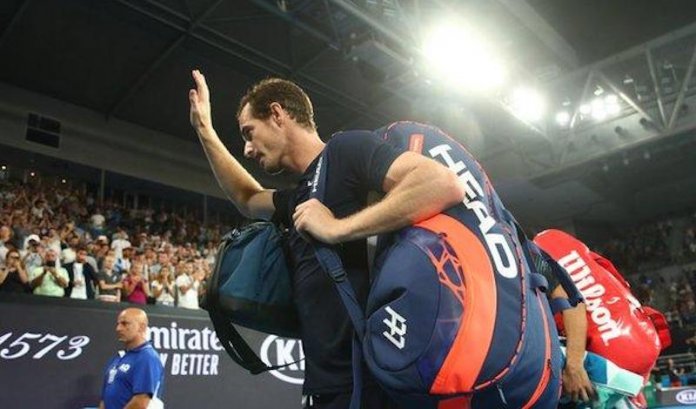 *Federer, Nadal through, Isner Out on opening day

Andy Murray yesterday produced a superb fight-back in what might have been his final match but eventually lost in five sets to Roberto Bautista Agut in the Australian Open first round.

Murray, 31, struggled early on but had the Melbourne Arena crowd roaring as he took the third and fourth sets.

“If this was my last match, it was an amazing way to end,” he said.

“I gave everything I had – it wasn’t enough tonight.”

Murray, a three-time Grand Slam champion, said on Friday he would retire this year because of a chronic hip problem.

However, he did suggest in his on-court interview that there was still a chance he could return to Melbourne.

“Maybe I’ll see you again. I’ll do everything possible to try,” said an emotional Murray after an epic match which lasted four hours and nine minutes.

“If I want to go again, I’ll need to have a big operation, which there’s no guarantee I’ll be able to come back from anyway, but I’ll give it my best shot.”

Following Friday’s news conference at Melbourne Park when Murray broke down in tears, many expected the Scot would struggle against a player he had beaten in their three previous meetings.

There were signs in the opening few games that the two-time Wimbledon champion could provide a tough contest. Having initially positioned himself nearer the back of the court, Murray moved further forward by the eighth game and earned a break point, which he could not convert.

Spaniard Bautista Agut went on to break his opponent in the next game before taking the set.

Watched on by brother Jamie and mother Judy, Murray’s grimaces were growing in number. He was broken again in the fifth game of the second set as Bautista Agut produced a smash winner, and then served out for a two-set lead. The 22nd seed seemed on course for a routine victory.

Murray, typically, had other ideas.

Those inside the arena must have believed they were about to witness one of Britain’s greatest sportspeople play his final set of tennis at this tournament and, perhaps, his career.

After the Spaniard broke to 15 in the third game of the third set, it seemed the inevitable was imminent.

But Murray’s career has been built on his doggedness, durability and refusal to give in. To use an analogy from one of his favourite sports, the Briton beat the count and punched back by breaking in the next game with a superb backhand down the line.

Another stunning shot helped him save break point in the eighth game and he was close to taking the set in the ninth, only to strike a forehand into the net.

In other matches played yesterday, defending champion Roger Federer is into the Australian Open second round after beating Uzbek Denis Istomin.

The Swiss, who has won the tournament six times, came through 6-3 6-4 6-4 and will play Britain’s Dan Evans next.

John Isner became the first top-10 player to fall on the opening day as he was stunned in four sets by world number 97 Reilly Opelka.

The victory was Opelka’s first in the main draw of a Grand Slam.

Opelka – who at 6ft 11ins is the joint-tallest player on the ATP Tour – is the first American to beat 6ft 10ins Isner at a Slam.

Betway Kicks off 2019 with Special ‘Money Back’ Offer

Betway, Official Principal Sponsor of English Premier League side West Ham United and Sponsor of the first ever Five-a-Side Football League in Nigeria remains the betting platform of choice for sport fans in the country.

It said in a statement yesterday that throughout the ‘Money Back’ promotion, Betway will reward its customers by refunding 1% of their bet amounts on all bets placed daily.

“Every time a customer bets, 1% of their bet amount will be deposited into their accounts as cash and will be ready to use the very next day. This promo applies to all sports (pre-game or live betting), casino, betgames, virtuals and Jackpot bets,” the statement stressed.

To qualify for this promotion, it said customers only need to bet any amount on any product and get 1% of their bet amounts back in cash.

Speaking on the promotion, Betway Country Manager, Lere Awokoya said, “The ‘Money Back’ promo is the perfect way to start the New Year. January can be a tough month for many people, so we decided to support Nigerians by giving them money back on every bet they place daily on the Betway platform.”