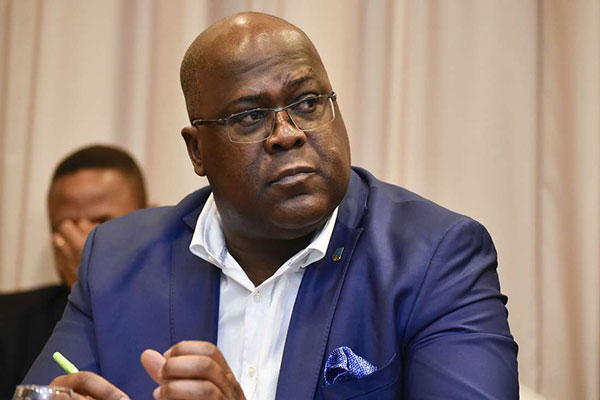 Provisional results put him ahead of another opposition candidate, Martin Fayulu, and the ruling coalition’s Emmanuel Shadary.

If confirmed, Mr Tshisekedi will be the first opposition challenger to win since the DR Congo gained independence.

Current President Joseph Kabila is stepping down after 18 years in office.

He had promised DR Congo’s first orderly transfer of power since the country’s independence from Belgium in 1960.

The election outcome was initially expected to be announced on Sunday. The interim result can still be challenged.

In the early hours of Thursday, the head of DR Congo’s National Electoral Commission (Ceni), Corneille Nangaa, said Mr Tshisekedi had received 38.5% of the vote and had been “provisionally declared the elected president”.

The full results were, with turnout reportedly 48%:

“I pay tribute to President Joseph Kabila and today we should no longer see him as an adversary, but rather, a partner in democratic change in our country,” he said.

Mr Tshisekedi has promised to make the fight against poverty his priority.

Mr Fayulu, a former oil tycoon, dismissed the results as having “nothing to do with the truth”.

“The Congolese people will never accept such a fraud,” he told the BBC, adding: “Felix Tshisekedi never got 7 million votes. Where did he get them from?”(BBC)