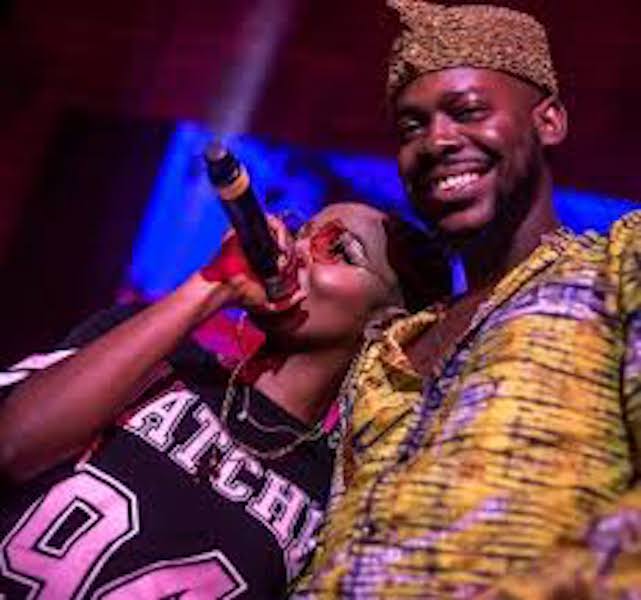 Singer Adekunle Kosoko (Adekunle Gold) and songstress Simisola Ogunleye’s (Simi) relationship has been an item of intense interest to their teeming fans and music lovers soon after both young artistes’ careers commenced. The nature of the relationship they both share has been on the front burner. Aside their music relationship, not a few believe there is no more than that but a romance between the two.

Despite all what has been seen, said, suggested, and guessed about them, there has never been a confirmation from the pair, and not even a straight denial. During a listening session of his recent album, Adekunle Gold said Simi was just his partner in music, particularly in the area of songwriting.

It however seems event of last Sunday December 8 has confirmed their status as Simi told Adekunle Gold that ‘Your love is overwhelming’ after they shared a kiss on stage. Simi celebrated her man, Adekunle Gold, with beautiful words after he joined her on stage at Balmoral Convention Centre, Federal Palace Hotel, Victoria Island during her annual concert tagged ”Simi Live in Lagos”.

The Joromi singer soon took to Instagram to share the photos from the concert, one of which revealed where she and Adekunle were kissing, and wrote: “God knew what He was doing when our paths crossed. Ur support is immense; ur love is overwhelming in the best way. Thank you Champ @adekunlegold. However, she immediately deleted the photo and replaced with a second one which shows them embracing.

One observer remarked: “Sure there is still a chance that they’re really just playing with us, but really, it looks more like they aren’t. The possibility that they could actually have been together all this while, yet leaving us with nothing but conjectures and guesses concerning their relationship and what possibly goes on in it is really impressive, and absolutely worthy of emulation, especially for lovers who like to keep things on the low.

“Apart from the chemistry and all the affectionate, almost sexual embraces we see from them during their many joint performances, not much can be said to be known about their relationship. And we must add that what we see on stage is actually what they want us to see – no more.”

The best alternative song award winner, Adekunle had said about his relationship with Simi. “I don’t have to tell you if I am dating Simi or not. I cannot reveal my girlfriend’s identity because it could be that she does not want to be known. It could be that I want that aspect of my life to be a secret. People know and love me because of my music.

“I cannot be married for 10 years and people would not eventually find out. When the time is right, everyone would know who my love interest is. Let’s assume that I am dating Simi, what if it does not work out? I’d love to keep that part of my life secret.”

The urban high life music revolutionist recently released his sophomore album titled “About 30.” The lead single of the album ‘Ire’ has had so much airplay that it has been dubbed “the Nigerian prayer anthem of 2018.” As expected, Simi had a hand in the album preparation process. She mixed majority of the songs on the record and also played a role in the area of songwriting.

The two singers are known to share a strong chemistry that has produced powerful emotion-filled music but it was unsure whether their chemistry also exists in the form of romance and they both have not helped matters by keeping fans guessing and leaving speculations to swell on the topic. Simi and Adekunle Gold have kept their romance low-key for quite a while, only flaunting their music aspects.

Reports have it that both singers have been together for a very long time even before their career flight. The affection shared by the pair on-stage and off it seem to attest to this. At the beginning of their career, the two kept their brands separate and were hardly photographed together. Given the heavy spotlight on celebrity couples, this decision paid well for Simi and her boo as they were able to build their careers outside the spotlight.

Although they tried their best to keep their love life private, their fans waited impatiently for them to go public as a couple. Well the fans that have waited so long for this confirmation can now rest knowing that their favourites are truly in love and in a flourishing relationship.