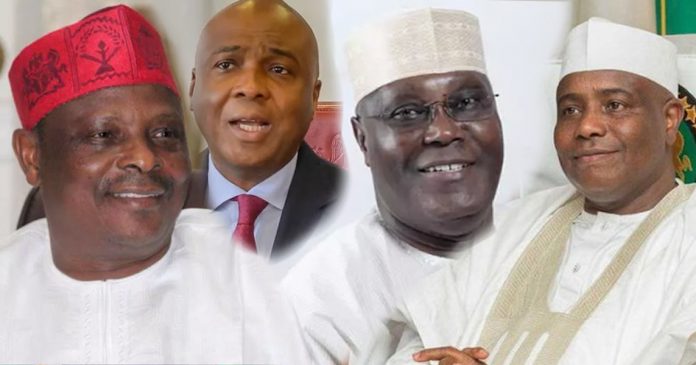 The National Working Committee (NWC) of the Peoples Democratic Party (PDP) last night met again with its 12 aspirants jostling for its presidential ticket for the 2019 general elections, in a bid to ensure a rancour-free outcome for its national convention holding tomorrow in Port-Harcourt, the capital of Rivers State.

The meeting held against the background of alleged plot by the ruling All Progressives Congress (APC) and the federal government to scuttle the convention.

The PDP National Publicity Secretary, Mr. Kola Ologbondiyan, confirmed the meeting to THISDAY yesterday, explaining it was to brief the aspirants on the arrangements made to ensure that the presidential primary was free, fair and transparent.

Meanwhile, the frontline aspirants, including former Vice President Atiku Abubakar, Senate President Bukola Saraki, Sokoto State Governor Aminu Tambuwal and former Kano State governor, Senator Rabiu Kwankwaso, were engaged in intense mobilisation of the party’s delegates yesterday as they made their way to the Port-Harcourt venue of the contest.

THISDAY sources revealed that given the level of mobilisation and electioneering by the aspirants, the outcome could be close, even as deep horse-trading are expected to continue till the early hours of tomorrow.

Ologbondiyan said the party leadership was doing its best to ensure that the party remained united after the contest, explaining that the only way that objective could be achieved was to put in place a fair process.

“We are going to get them to agree to the delegates’ list before it goes into final print tomorrow,” he said, adding that all the aspirants were given a draft copy of the list each three days ago for their scrutiny.

“We are determined to deliver a transparent process, which outcome would be acceptable to all the aspirants,” Ologbondiyan said, explaining that all the aspirants nominated representatives into the various committees overseeing the organisation of the convention, including the usually contentious accreditation and electoral committees.

The party also said yesterday that it was aware of the plots by the APC-led federal government to use court injunction or funding court decision among other machinations to stop its convention.

Ologbondiyan said this while briefing journalists in Abuja, after the meeting of the NWC.

According to him, “Part of the outcome of the meeting of the NWC today, is to alert the nation as well as the international community of plots by the ruling party and the ruling government to disrupt our national convention scheduled to hold in Port Harcourt on Saturday, the 6th of October through Sunday, the 7th October.”

He said, however, that no plan by the federal government would stop the party from holding its convention as scheduled.

He explained that the plot by the ruling party was aimed at preventing the opposition party from electing a candidate that would contest against President Muhammadu Buhari.

Ologbondiyan stated, “We are aware, we have been informed of machinations by the government and the ruling party which is mortally afraid of any form of election to disrupt our convention, to ensure that we don’t have presidential candidate.

“We invite Nigerians to take note of this and we invite the international community to take serious note of the plots by the ruling government to thwart the efforts of the opposition to elect a candidate that will go into the February general elections against President Muhammadu Buhari.

“We invite all Nigerians to take cautious note of this development. However, on our own part, we wish to inform Nigerians particularly members of the PDP that the national convention where our presidential candidate will be elected that has been scheduled to hold in Port Harcourt will go on as planned.

“No plot, no plan by the ruling government can stop our national convention.”

Asked what kind of machination the ruling party is plotting, Ologbondiyan said, “Its machinations of all kinds, it can be through the court, by funding court decision. It could be any form of machinations.”

The alleged plot notwithstanding, the aspirants started arriving at the Port-Harcourt City venue of the convention yesterday ahead of delegates, who are expected to begin to troop today.

The party’s national secretariat, according to Ologbondiyan, would provide accommodation for the delegates as part of the efforts to level the playing field and avoid the past practice of wealthier aspirants camping and making them unreachable to other aspirants.

THISDAY investigations, however, showed that Atiku, Saraki, Tambuwal and Kwankwaso appear to be in the forefront of the canvass for the votes of the delegates who will determine the battle for the party’s ticket tomorrow.

The Chairman, Media Committee of Abubakar Bukola Saraki Presidential Campaign, Dr. Doyin Okupe, yesterday in Port Harcourt projected that his principal would emerge as the presidential candidate of PDP on tomorrow.

Okupe reeled out the qualities of Saraki, which he said, made him the best out of all the aspirants in the race, describing Saraki as a quintessential leader with an intimidating track record of achievements.

“We have arrived at the garden city, where the presidential candidate of PDP will be elected. It is a great event that will determine and shape the future of Nigeria. His Excellency, Dr. Bukola Saraki, is a man that has been aptly described as a man for this season; A man that has inborn proclivity for leadership,” he said.

Okupe also drew comparison between the depth of achievements and antecedents of both Dr. Bukola Saraki and his late father Dr. Abubakar Olusola Saraki.

“Only a very few successful politicians can point to such a magnificent record. Besides, he has been a two term governor of Kwara State. He was a Chairman of the Nigerian Governors Forum. As a senator, he is currently the Senate president and the Chairman of the National Assembly. Prior to that, he was a Special Adviser to President Olusegun Obasanjo on Budget Affairs”.

Okupe further narrowed down on contributions of Saraki to the growth of Nigeria’s democracy as well as the acceptability and his chances in the national convention.

He also extolled the virtues of Saraki and the impression of Nigerians, particularly the youth about the Senate president. “He is a great, confident, courageous, competent and cerebral personality. He is a shinning light in the political firmament of the PDP.  Having gone round the country with Dr. Saraki, I am amazed at the level of his acceptability in virtually every zone of the nation. Abubakar Bukola Saraki has become a national phenomenon and his ideology and policy to grow Nigeria has become a doctrine especially amongst young Nigerians”.

Tambuwal Has what it Takes, Says Campaign Organization

Also in a statement yesterday, the spokesman of the Tambuwal Presidential Campaign Organization, Dr Okey Ikechukwu, said Nigeria’s best chance of a president that can unite Nigeria, restore a sense of community and give the nation 21st Century leadership, is Tambuwal. He said, “First Tambuwal has learnt the ropes over the years, at the highest levels of national leadership and also as a professional. Second, he is very well known as a master of consensus and political bridge building, which makes him the type of person we need now. Third, he has no issues with the law. Fourth, he is one candidate in this contest who takes pains to be in mentioning specific, practical and implementable policy ideas, actions and proposals with which he intends to tackle our national problems once elected.”

Ikechukwu said Tambuwal believed in the restructuring of Nigeria, explaining that he insists that the nation’s diversity must be maintained if the polity would give everyone a sense of belonging.

He said the presidential aspirant looks at restructuring from the angle of realistic devolution of powers, debugging the essentially unitary provisions of the constitution and ensuring that the federating units do not feel diminished in their interface with the central government. According to him, “Restructuring does not, and cannot, mean balkanizing and re-dividing the lands and rivers of Nigeria. Tambuwal has explained that we should remove the pillars of inequity in our existing constitution and debug them for a better. This will include moving things like power supply, railways and so many other things from the Exclusive Legislative List to the concurrent lists. It will include allowing the Federating units to choose who should represent  them in institutions like the Federal Character Commission, Boundary Commission, etc.

“So you see Tambuwal is the man to beat in both the PDP primary and in the 2019 election.”