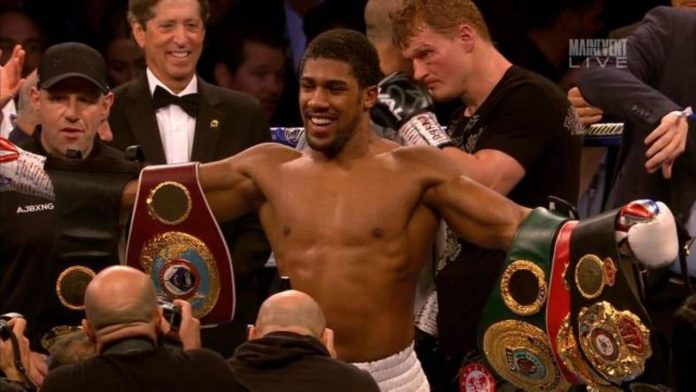 Anthony Joshua will face the winner of December’s fight between Deontay Wilder and Tyson Fury “subject to terms, without a problem in the world”, says Matchroom Sport chairman Barry Hearn.

Joshua retained his world heavyweight titles with a seventh-round stoppage of Russian Alexander Povetkin on Saturday.

He will return to Wembley in April to face a yet to be named opponent, with Dillian Whyte also in the frame.

IBF, WBO and WBA champion Joshua confirmed after beating Povetkin that his “number one choice would be Wilder”.

“Tyson Fury will not be in a position to fight on 13 April in my opinion. If he is, I would love to see it.”

Fury’s promoter Frank Warren refused to confirm whether there was a rematch clause in the contract with Wilder, leading Hearn, whose son Eddie promotes Joshua, to say: “There has to be a rematch clause. Deontay Wilder is not going to risk his title without a rematch clause.

“I know Anthony Joshua has made his shopping list of who he would like to fight next and that is Deontay Wilder, but that is not to say the deal can be done.”

Warren insisted former champion Fury would demand a 50-50 split of the purse for a fight with Joshua.

“It is subject to terms because you [Warren] will ask for a ridiculous amount of money and it won’t be made,” responded Hearn.

“It is not a 50-50 split against the number one heavyweight in the world – you can forget that completely.”

Fury has fought, and won, twice since making his comeback in June after two and a half years out of the ring. During his spell on the sidelines, he gave up his world titles and focused on mental health issues.

He has vowed to regain the titles “which are rightfully mine” having outpointed Ukrainian Wladimir Klitschko to become WBA, IBF and WBO champion in November 2015.

“I think it is safe to say that neither Team Joshua or Matchroom will fight the Gypsy King. They mentioned if it is not Wilder, it will be Whyte, but there was no mention of Tyson Fury, the lineal champion of the world,” Fury said in a video on social media.

“It is all right fighting men 39-year-old and half your size. [This] is the best evidence that I am fighting the best heavyweight out there in Deontay Wilder, Joshua is not even close. He is slow, methodical, ponderous at times, powerful yes, but they all are.”