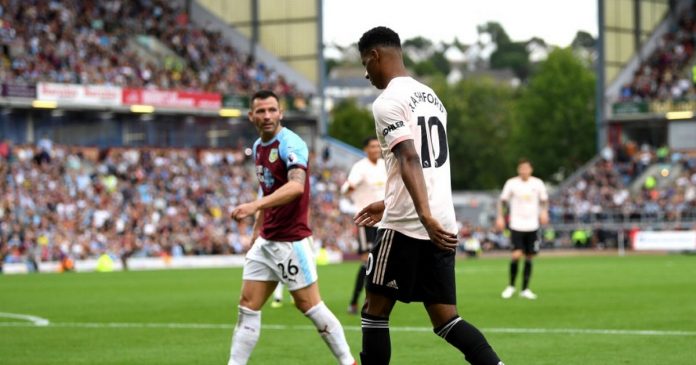 Manchester United recovered from back-to-back defeats to beat Burnley despite Paul Pogba missing a penalty and Marcus Rashford being sent off.

Romelu Lukaku scored twice in the first half as the Red Devils – beaten by Brighton and Tottenham in their previous two Premier League matches – were largely untroubled by their hosts.

Pogba had the chance to stretch United’s lead midway through the second half but his penalty – after Aaron Lennon fouled Rashford – was saved by former Manchester City goalkeeper Joe Hart.

And two minutes later the visitors were reduced to 10 men when Rashford was sent off for leaning into Burnley defender Phil Bardsley with his head.

That made the closing stages unnecessarily tense for Jose Mourinho’s side, but the Clarets were unable to find a way through.

Victory took United up to 10th in the table – level on points with Everton in seventh.

United’s first-half performance at Turf Moor was thoroughly professional, but it was a different story in the second 45 minutes.

The build-up to the match had been dominated by discussion of the Red Devils’ stuttering start to the season, and the club’s executive vice-chairman was the target of a banner that flew over the ground before kick-off reading ‘Ed Woodward: A specialist in failure’.

If the United players were aware, they were unaffected during a comfortable first half.

Lukaku looked back to his clinical best when he rose highest to power home Alexis Sanchez’s clipped cross after 27 minutes.

And the Belgian reacted well for his second on the cusp of half-time, slamming the ball home after a series of kind deflections.

But, with the game stretched in the second half, he failed to complete a hat-trick – squandering the best chance after rounding Hart under pressure from Ben Mee.

Rashford, who had won the penalty shortly after coming on, lost his cool in an altercation with Bardsley and was shown the first red card of his career.

More pleasingly for Mourinho, his defence – again changed from the previous match – looked solid, keeping United’s first clean sheet of the season and a 10th in their past 11 visits to Turf Moor.

A second home defeat of the season leaves Burnley 19th in the table with just one point taken from their opening four matches.

They offered little throughout, perhaps affected by their Europa League exit to Olympiakos on Thursday.

Elsewhere, Watford maintained their perfect start to the Premier League season as they came from behind to shock Tottenham at Vicarage Road.

Both sides began the match with 100% records but Craig Cathcart’s second-half header edged a tight encounter.

Captain Troy Deeney had drawn his side level seven minutes earlier, cancelling out Spurs’ fortuitous opener as Watford midfielder Abdoulaye Doucoure bundled into his own net.

And Watford held on to win their opening four games of a league campaign for the first time in 30 years and join Liverpool and Chelsea on maximum points at the top of the table.