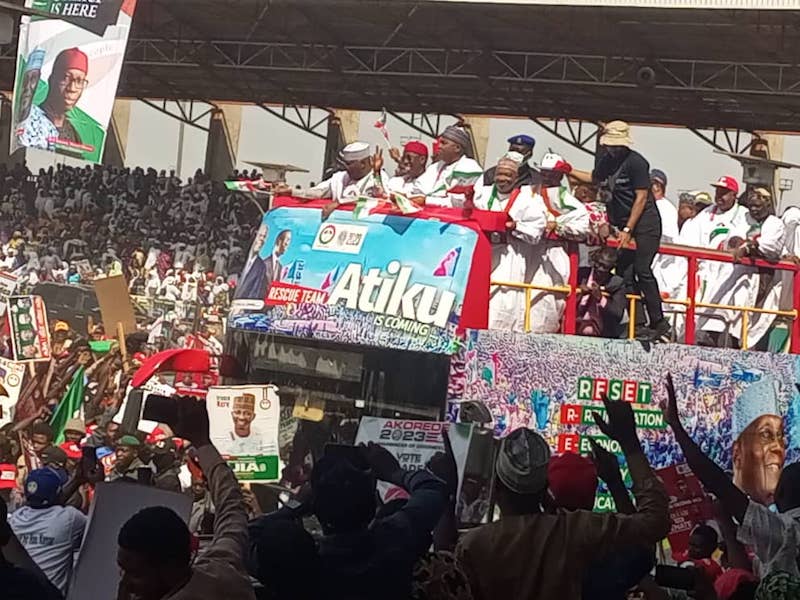 Presidential candidate of Peoples Democratic Party (PDP), Atiku Abubakar, yesterday, at a rally in Kwara State, decried what he called the careless tendencies and maladministration exhibited by the All Progressives Congress (APC) in the state and the nation at large.
Atiku spoke amid chants of  “O suwa” (we’re fed up) from the crowd, as a counterbalance to the O’tooge movement of 2019, which belonged to APC, at the Kwara State stadium, Ilorin, which was filled to capacity.

The former vice president promised to revive the Kainji Dam, if elected president next year, and described the discovery of oil in the north as a healthy development. He, however, said the oil find would not alter his planned diversification of the economy.
While pledging that life would return to normal in the state and Nigeria, if he was voted into office, Atiku said the dam, now prone to triggering flood and soil erosion, would be adaptively managed to make it work optimally without hiccups.

The former vice president, whose campaign team landed in Ilorin, Kwara State capital in continuation of its nationwide tour, recalled that a 2019 campaign of calumny by APC in the state robbed the Saraki dynasty of its generational transformation in the state through the dubious slogan of O’tooge, which ushered APC to power.

The PDP candidate said, “An image was created, which harvested disillusionment and a sense of servitude and bondage. The campaign was that for the last 34 years, one family was deciding the fate of all Kwarans.
“This is the story of APC victory in Kwara and the tide has changed. Kwarans are tired of the four years of APC administration and the coalition that sold the O to ge mantra is fragmented.

“Yahman, the PDP gubernatorial candidate, was a staunch member of Otoge, this means Kwara is waiting to be taken by the PDP. The party is united under the leadership of Senator Bukola Saraki. I commend the PDP Kwara for this and for remaining on course.”
Still on Kainji Dam, Atiku pledged, “A PDP government at the national level will, through watershed management, seek to reduce erosion and sediment inflow to the reservoir.

“The plan is to use ‘adaptive management’ to maximise its benefits, while paying attention to and minimising environmental impacts over time. This can be done by using turbines that are more efficient or fish friendly or by lowering the height of the dam.”

Atiku acknowledged the dam “contributes electrical energy, water control of the Niger down to the Kaduna River confluence, enhances river navigation upstream to Yelwa in Kebbi State, as well as waters for irrigation and fishing”.
He expressed worry at the dilapidated state of federal roads in parts of Kwara State, like Kishi-Kosobusu, Kishi-Kaima, and Ilorin-Kabba roads, linking Kwara with Kogi and Oyo states, as well as Benin Republic.

Atiku promised the people that he “would do something about these roads to enhance their livelihood and ensure their security, if elected.”
The PDP standard bearer also reiterated that he would be committed to rolling back youth unemployment in the state while resuscitating moribund industries.

He stated, “Youth unemployment is rife in Kwara, like most parts of Nigeria. We promise to design vocational programmes and revitalise the existing ones, provide take-off grants for unemployed youths to establish businesses, invest in, re-tool as well as reengineer the farming system with modernized implements to accommodate large percentage of the vulnerable population in Kwara State.”

He assured that he would “encourage new human capital development programmes to support youth and women.” He added, “There are no functional industries in Kwara State. The paper mill in Jebba is folded. Bacita and Lafiagi sugar companies have been sold and are operating at snail speed without impact on the people like it was before.

“My administration will provide incentives for private sector participation in Nigeria, as a whole, and in Kwara, in particular, to encourage the industrial and manufacturing sectors.”
Atiku later took to his verified Twitter handle, stating that the discovery of crude oil in the North-east would not stop his planned diversification of the economy, if elected president next year.

According to Atiku,  “The discovery of crude oil and the official flag-off of the exploration by President Muhammadu Buhari is a healthy development that will go a long way in revitalising the fortunes of the Northeastern region of Nigeria.
“It will create an opportunity for more investment in education with an emphasis on skills training and entrepreneurship development, which in turn will further generate prosperity for our young people and guarantee a better future for the upcoming generation. However, this discovery is without prejudice to my focus on the diversification of our economy that will ensure multiple streams of revenues for the country.”

Earlier, the vice presidential candidate of PDP, Dr Ifeanyi Okowa, said he was happy with what he saw in Kwara. Okowa added that the huge crowd that received PDP showed that people were very hungry and ready to drive away hunger.
He stated, “The PDP is ready to create employment and won’t allow our children stay eight months without going to school,” he said, assuring, “The PDP will win in all six geo-political zones of the country. We will work with the people and rebuild Nigeria.”
Chairman of PCP, Senator Iyorcha Ayu, said, “The PDP is one big united family. We are on our way back to victory. PDP has come back to rescue Nigeria and put it back on development track to rescue all families.

“Don’t allow anyone to deceive you, we are hungrier than we were in 2015. Bring out your voters card, come out en mass and vote all PDP candidates especially, Atiku, in the general election.”

Ayu later presented the PDP flag to the party’s governorship candidate in the state, Yaman Abdullahi.
Former President of the Senate, Bukola Saraki, asked the party’s supporters to vote massively for all candidates of the party in next year’s elections, saying the people can trust him and the party’s leadership.

Saraki stated, “I stood and fought for democracy, APC came and lied to you and now you know the difference. It is time for Nigerians, starting from Kwara, to kick out APC.
“When PDP was in power, exchange rate was 200 and now it is 800, we are all tired. Atiku loves Kwara since the days of my father, other candidates don’t love you; they merely want to exploit you.”