CJN: Judiciary Yet to Be Truly Independent, Administers Oath of Office on 62 Fresh SANs 26 mins ago

ATSSSAN vs. BASL: One Strike Too Many 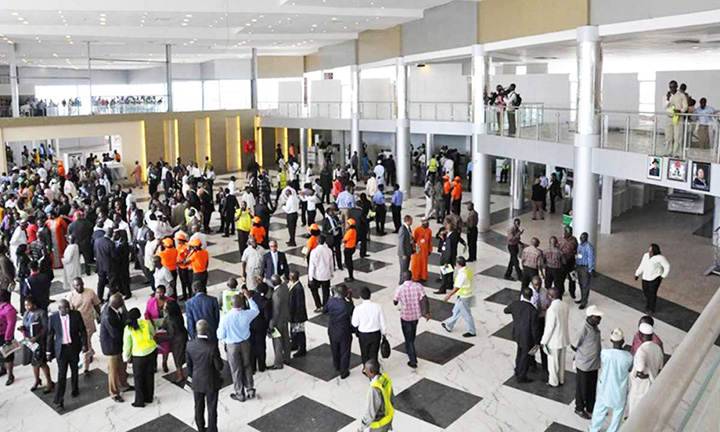 The recent protest by members of the Air Transport Senior Staff Services Association of Nigeria against the management of the Bi-Courtney Aviation Services Limited, leading to flight disruptions and gridlock is a serious embarrassment that could cheapen the resort to strike as a form of conflict resolution, writes Chinedu  Eze

Recently, members of some aviation workers’ unions took to the street in a protest that led to the picketing of the premises of airlines, catering companies, handling companies, airport terminals and others that operate inside the Murtala Muhammed Airport Terminal 2 (MMA2).

It was a protest that left many road users including intending travellers and staff of the various airlines stranded with the attendant huge losses as the facility was closed to both workers and passengers by the members of the Air Transport Senior Staff Services Association of Nigeria (ATSSSAN) due to the sack of their colleagues by Bi-Courtney Aviation Services Limited (BASL).

The union had earlier complained that 34 of its members were sacked a fortnight ago with “ordinary e-mails” sent to their different boxes with disregard to the rule of law after they were first sent on a compulsory leave of absence for 10 days.

The Vice President and Deputy General Secretary of ATSSSAN, Emmanuel Jaja and Frances Akinjole, respectively told aviation journalists that most of those laid off had worked with the company for at least a decade.

Akinjole emphasised that the action was to witch-hunt its members working with the terminal operator, stressing that its branch chairman, branch secretary, branch treasurer and branch women leader were all affected by the sack.

Akinjole said the action of the management contravened Section 20 of the Labour Act on engagement and disengagement of staff by any company in the country, maintaining that the union would kick severely against the act of the management.

According to him, since the terminal operator “grudgingly” accepted that its staff could join the unions, the company continued to intimidate its members. He further stated that the union had on June 16, 2021, concluded the signing of the staff Conditions of Service (CoS) for its members in Bi-Courtney, after a prolonged negotiation with the management, which spanned about three years.

He also explained that after the execution of the CoS document, a female member of the union resigned from her appointment with the BASL when she could no longer condone the intimidation, and the presentation of a cheque for her terminal benefits, which she rejected, became an issue.

Akinjole explained that BASL management had used historical (year by year) computation to calculate her exit pay instead of the expected last salary, lamenting that the rejected cheque denied the beneficiary to the tune of about N3million.

He stated that Section 1.12 of the Conditions of Service provides two months’ basic salary per year to be paid to any worker who resigned from his or her appointment.

BASL in a statement described the action of ATSSSAN as illegal. It said that contrary to laid down principles of industrial relations and in total violation of the laws of Nigeria, “our Terminal was shut down at 2:30 am on  November 1, 2022 by ATSSSAN. There was no proper notice of this damaging behaviour.”

“The alleged cause of this industrial action is our decision to lay off some of our staff whom we consider unproductive.  It is our inherent right to manage our business most prudently and we should not be intimidated by external forces as is being done in this case.

BASL also stated that the unions were also claiming that the company should apply the conditions of service, which it signed in June 2021 retrospectively.  Again, this is contrary to established rules of industrial relations and the laws of Nigeria.

“This is a recipe for anarchy. We remain very law-abiding citizens and use this medium to apologise to all our clients and stakeholders for the unacceptable behaviour of the unions,” BASL said.

Domestic airlines, which operations were disrupted by the closure did not envisage it and were confused about what to do to airlift their passengers in the critical early morning flights, as the union members defiantly blocked access to the terminal.

They later relocated temporarily to the General Aviation Terminal (GAT) operated by the Federal Airports Authority of Nigeria (FAAN), known as MMA1.

The activities of the union members led to gridlock, which lasted for hours, as they blocked movements in and out of the terminal, thus forcing vehicles to remain standstill on the essential link road between the international and local terminals that also connect to Ikeja.

Reminiscing over the incident, the Chief Operating Officer of Ibom Air, George Uriesi, who kept constant communication with the airline’s customers, updating them on every move the airline was making to ensure it provided passengers with the best service under such circumstances, reacted on the disruption of the airlines’ operation at MMA2.

“Let us put in perspective, the practical consequences of the labour action taken today at MM2. For starters, my airline had 31 flights scheduled for today, 98% of them either originating, terminating or linked to an originating flight from Lagos. This meant that we disrupted the programmes of approximately 1,900 paid-up passengers. Only God knows how to fully quantify this. This is not just economic, but also in trauma terms.

“For us, the airline, a lot of the catering ordered, paid for and delivered for our flights today is now wasted (due to perishability). We were forced to reschedule at least 1,000 already booked and confirmed passengers on other flights from tomorrow (Wednesday), costing us heavily in lost revenue (having to remove seats from sales inventory) and wasted man hours, while placing severe and unnecessary pressure on the system. We also had to organise (at considerable additional cost, not to mention huge inconvenience) to operate in and out of GAT today,” he said.

“For the service providers- ground handlers, outsourced security, etc, plenty of unnecessary and unexpected loss of revenue. There is a huge waste of man-hours. All in all, it was a largely unproductive day. Something the industry can hardly afford at this critical time! The sort of very, very, very bad day that I hope we never see again as an industry,” he said.

Industry expert and General Secretary of Aviation Round Table (ART), a think-tank group in the industry, Group Captain John Ojikutu (rtd), said in reaction to the picketing that it was wrong to do so at this time.

“Am just hearing from a colleague at the MMA2 Terminal that the unions have blocked the entrances to the terminal refusing passengers from getting access into the terminal to catch their flights operated by airlines and not by the terminal operator. It is high time the lawlessness of the unions was curtailed by the responsible authorities especially the Nigerian Civil Aviation Authority (NCAA).

“The NCAA in particular has the absolute powers and authority on civil aviation security at the airports. If there are Civil Aviation Laws for Disruptive Passengers; there must be similar laws within the airport operational areas for disruptive staff and disruptive staff unions,” he said.

Many stakeholders said that even if in the end the unions have their way, the cost of pushing for their interest is always too much for the industry; that when weighed, it would be akin to killing an ant with a sledgehammer. But no effort has been made to curtail such excesses and the unions continue to see it as normal.

On the part of BASL, it needs to always put its house to check and avoid a repeat of the pains and hardship suffered by many passengers and businesses that use its facilities.

One Strike, Too Many

Although there are relevant constitutional provisions entrenching the fundamental right of freedom of association as well as the provisions of other national and international legal instruments which guarantee the right to strike as well as the right to collectively bargain on behalf of trade unions, concerned analysts believe declaring an industrial dispute at every opportunity is making a mockery of the rights of the workers.

In Nigeria, most strikes are undertaken by labour unions when there is a breakdown or deadlock of negotiations or collective bargaining between employees and employers. However, some believed that opting for a strike as the only means of protest will be counterproductive as the situation is getting to a point where people are no longer taking workers on strike seriously. Unless the unions go back to the drawing board to fashion out a less provocative way of registering their protests, they may lose public sympathy as evidenced in the recent experience with the Academic Staff Union of Universities (ASUU) and the federal government.