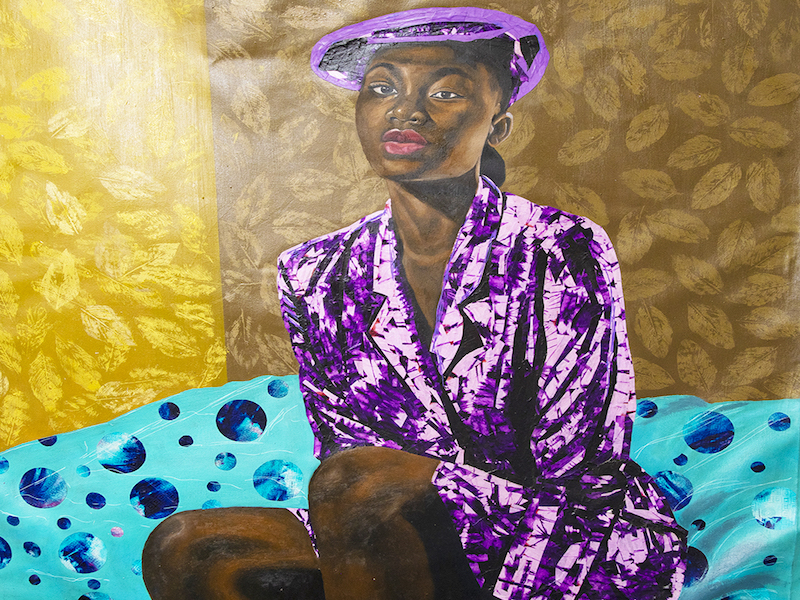 Emmanual Adeyemi, Lawrence Meju, Roseleen Labazacchy, and Thuthukani Myeza may have different backgrounds and interests, but at this latest group show at the Affinity Art Gallery in Victoria Island, Lagos, their works collectively echo the same message. Centred on the theme Desire Lines, the show illuminates the concept of a desire path – one that is formed when people choose not to use the path that you have paved for them.

According to the curator, Moni Aisida, the works in this exhibition explore the concept of what it means to take that road and the myriad outcomes that could be wait on the other side.

Lawrence Meju’s works implore us to “explore our mindscape, face all our emotions and who we are head on.” His painstaking method of documenting, sketching, cutting, measuring and pasting the paper in his works pays homage to his background in architecture.

Working with textured paper, upcycled paper and paints, art is a channel for his introspection. His collection titled “Extranormal Portraits” is executed with a playful approach, which culminates into a series to inspire authenticity.

An undergraduate student of architecture at the University of Lagos, he revealed that paper was the only medium available to him at the time of conception and creation of the works which grew largely out of journaling. “When Life Gives You Kotton Kandies is just another way of saying when life gives you lemons,’’ he explained at the exhibition opening.   Alluding to the ocean in this piece, Meju’s works speak volumes about his optimism and calm approach to life. “Vivid Dreams is a manifestation of God blessing the work of my hands,” he added.

Life may not have been all rosy for the young artist but he doesn’t despair. His mother lost two shops in FESTAC to a government demolition exercise and she is yet to get compensation from that. “But then, there are good things too. I won a spelling bee competition. So, for me, I’d rather focus on the good things that had happened to me than wallow in self-pity.”

One of those good things that happened to Meju is the Adidas Flagship London with Creative Debuts (2022) where his works were first exhibited outside Nigeria.

Emmanuel Adeyemi’s works are about tapping into our subconscious by connecting with nature and the universe around us. He urges the viewer to look beyond the surface. He believes that the disharmony in this world is caused by our ignorance to the fact that we are layered human beings.

“Once we are able to unite within ourselves, that unity will be reflected in the world,” he said. His interest lies in human relationships, transforming the earth and challenging perspectives as well as perceptions. Using foam, damask and acrylic on canvas, Adeyemi often enjoys working outdoors. Some of his works at the show include The Home Gym, Conscious Fantasy and A Time Travel occurred While Going Down Memories.’’

A digital collage artist from Johannesburg, South Africa, Thuthukani Myeza began his digital collages from the first phase of the pandemic in 2020 to seek solace and refuge. His work explores the beauty and dread of being black influenced by apartheid, segregation, pre-colonial and colonial Africa.

Myeza’s works are about the power of narrative.  He relishes the power to tell the stories of his people. In the body of works, he retold stories. His works redraw the lines and boundaries of what we have accepted as fact and truth with the works he juxtaposes in his images prompting the viewer to ask questions about their history and reality.

“I discovered that parts of our history were not taught in schools. The beauty of a continent is still held hostage in the museums and the galleries of the oppressors’ descendants. My work is a reshaping of narratives hidden behind payrolls and privilege.”

His protest art collection, which include Freedom “As A Struggle, Get Ready Mama and Freedom Debt” is timely as it reflects the journey of universal suffrage in South Africa as well as other fundamental rights of citizens often threatened by forms of tyranny.

Roseleen Labazacchy, who hails from Oyo is preoccupied with celebrating the African women using mixed media and a seamless amalgam of post-impressionism and neo-impressionism.

“My work focuses on African woman’s dignity,” she explained. “Women are seen as not as powerful as the men. Women are not treated with as much respect as the men.  They blame the women for failure of the homes. I believe in naturalness. I believe that the beauty of the African woman in within and not the makeup. I grew up in Oyo town and I had seen different families and I wanted to change people’s mentality about women. I believe that women should not be financial burden on their husbands. Women should love themselves for them to be able to love the other women. You don’t need to be maltreated to prove their love. Women should have the freedom to choose the men they would want to marry.”

With titles such as “Touch Not”, “Dozing Beauty”, “Echo Within” and “Centre of All”, her works depict African women in bold colours, sometimes militant, sometime defiant, sometimes peaceful but at all-time self-assured.  She appropriates the African tie-dye textile materials adire, some of which she dyes herself to signify the uniqueness of every subject. Her collection is a repository of stories of African women in history, the warriors, the matriarchs, the deities and the queens and kingmakers from whom they originate. Through her works, she inspires women to defy societal odds and become the best versions of themselves. The show runs till September 30.