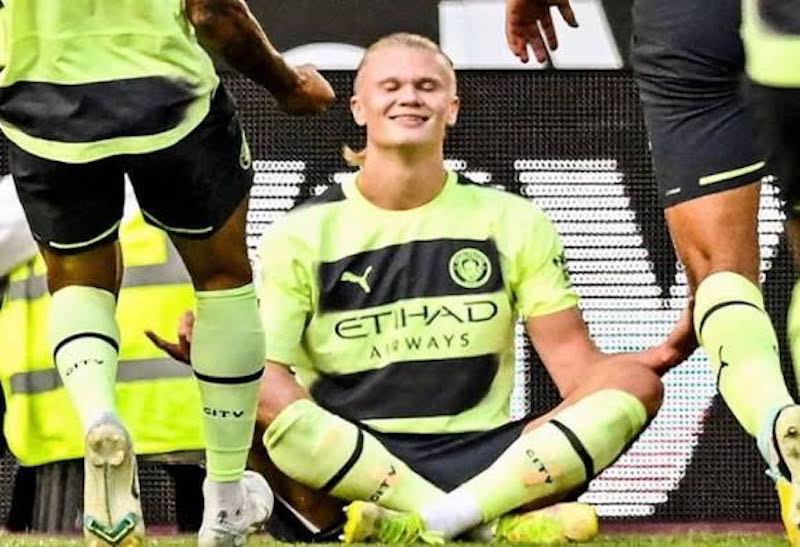 Erling Haaland opened his Manchester City goal account and demonstrated the huge threat he will pose this season as the champions began the defence of their Premier League crown in impressive fashion at West Ham United.

The brilliant 22-year-old Norwegian striker delivered exactly what City manager Pep Guardiola wanted following his summer signing from Borussia Dortmund when he gave City the lead from the penalty spot nine minutes before half-time, after he was brought down by West Ham’s substitute goalkeeper Alphonse Areola.

He was on as substitute for injured Lukasz Fabianski but was helpless when Haaland wrapped up City’s win after 65 minutes with a composed left-foot finish from Kevin de Bruyne’s perfect pass.

City won at a canter against a strangely passive West Ham, who barely threatened after a brief opening burst, spending long spells out of possession as the champions exerted almost complete command.

The game was Ten Hag’s first competitive game as Man Utd manager and it didn’t exactly go to plan, as he watched his side be thoroughly outplayed in the first half and conceded two goals.

Speaking after the game to the press, Ten Hag expressed his disappointment in the performance.

“Of course definitely a setback and real disappointment. I knew from the start it would not be easy. We gave two easy balls away and it was not good in the organisation,” he said.

“It is clear to see the second half we were better in midfield with (Christian) Eriksen down and (Cristiano) Ronaldo up. We created and (Marcus) Rashford had two good chances, it is a shame we did not score.

“I am not satisfied, totally not. We lost and it was not necessary. We should do better.

“We made mistakes on the ball and organisation mistakes in defending. We have to take the lessons and learn quickly from it.”