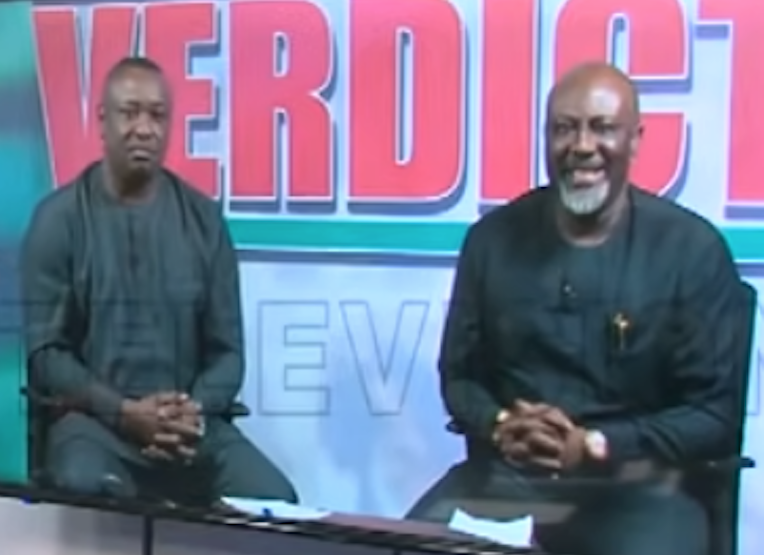 Chuks Okocha in Abuja and Sunday Ehigiator in Lagos

Although campaign for the 2023 general election has not officially started, a foretaste of what Nigerians might expect came to the fore at the weekend, as a former lawmaker, Dino Melaye, took on the spokesman of the All Progressives Congress (APC) presidential campaign, Festus Keyamo, and the ruling party’s presidential candidate, Bola Tinubu, alleging that the former Lagos State governor is seeking the presidency as his entitlement and retirement benefit.

Melaye, who was last week appointed Atiku Abubakar presidential campaign spokesperson alongside Daniel Bwala, claimed that Tinubu was contesting for the presidency not on the basis of the greater good of the country, but to fulfil his “lifetime ambition.”

Keyamo, who is also Minister of State for Labour and Employment, had in a recent television interview said, “Atiku Abubakar has never held any government position where he makes the final call. He was vice president; he was not the chief executive. He was never governor. He was never anything. Even Peter Obi is ahead of Atiku Abubakar.

“Peter Obi is ahead of him in terms of capacity to make decisions. So how are we going to hand over the country to somebody who has never shown the capacity, who has never held a position where he makes the final call?”
However, responding to Keyamo, in a video shared on his Facebook page, Melaye said, unlike Tinubu, the PDP candidate was contesting the 2023 election with rich credentials.

According to him, Atiku has the rudiments of civil administration and politics.
Melaye said, “Atiku Abubakar is running for the presidency for the second or third time and he understands this route better than the political virgin, Tinubu, that you (Keyamo) are supporting, who is running for the presidency for the first time and sees it as his life entitlement and retirement benefits for supporting Buhari.
“Atiku has rich credentials and he is not running because of entitlements; he is not running because of his support for any party. He is running because he’s got the credentials and he is a team player. He is a talent hunter and leader per excellence.

“Keyamo’s inactive ministerial sojourn is affecting him. Because if he has succeeded as a minister he won’t be talking the way he is talking. Many Nigerians will tell you today they don’t know the ministry where Keyamo is working because he is redundant, inactive and invisible and he has been completely consumed by the aura of Ngige, the superior minister.

He told Keyamo, “I challenge you to a debate, and when we sit down then I’ll break you to pieces.  Unfortunately, I’m doing this over social media, but I’ll wait for an invitation from any other platform to sit down with you so that I’ll expose your ignorance to Nigerians, so they know how empty you are.”
Other Atiku campaign groups also reacted to Keyamo’s comments, advising Nigerian parents, “If you love your children, if you want ASUU strike to be a thing of the past, then vote out a government that met Nigeria as the third fastest growing economy in the world, according to CNNMoney, and has now turned her into the world headquarters for extreme poverty for the last five years.”
The groups added, “Atiku Abubakar has a private university that has never gone on strike. Vote for him and he will do for our public university, what he has done for his personal university.”

The Atiku’s support groups also faulted Keyamo, saying, “It may be that Mr. Keyamo is faced with selling such a bad product as Bola Tinubu, a man who voluntarily entered into a drug assets forfeiture plea bargain with the US Department of Justice and who has multiple questions on his source of wealth, real identity, and educational qualifications, that he is doing the next best thing, de-marketing his main rival.
“It is not true that vice presidents do not have executive experience and capacity, to the extent where they have the final call. At least in Nigeria and the United States. By virtue of Section 153 of the Constitution of the Federal Republic of Nigeria, as amended, the Vice President has final executive control and capacity over the National Economic Council.

“Not only was Atiku Abubakar the boss of these bosses (Tinubu, Kwankwaso, and Obi), but he also led the National Economic Council at a time when Nigeria paid off all her foreign debts to the Paris Club and other Bretton Woods institutions, meaning that not only does he have experience, but his experience is good.”
The Atiku groups further stated, “Atiku Abubakar was also the chairman of the National Council on Privatisation, which is a statutory body and he thrived in that position. Meaning that he also has further executive experience that is positive.

“It would be recalled that Atiku Abubakar stood in for then President Obasanjo on multiple occasions. One of such occasions was on July 10, 2003, when the governor of Anambra, Chris Ngige, was abducted while then President Obasanjo had travelled and then Vice President Atiku Abubakar was in charge.
“In an interview with THISDAY newspapers on August 16, 2020, Chris Ngige revealed how Atiku Abubakar ordered Tafa Balogun, the then Inspector General of Police, to restore him to power. What will Festus Keyamo call that, if not executive authority? This is the same executive authority that enabled Vice President Yemi Osinbajo sack the Director General of the Department of State Security, Lawal Daura, on August 7, 2018.

“And although it is fallacious to say that Waziri Atiku Abubakar has no executive experience, let us for the sake of argument condescend to Keyamo’s pedestrianism. How much executive experience did Kennedy, Obama, and Trump have before going on to be President? None. Yet, they performed.
“Keyamo said Tinubu increased Lagos’s IGR. True. But much more than that, Tinubu increased Lagos’s debt. Tinubu met a debt of less than $200 million and left a debt of billions of dollars. Lagos alone owes six per cent of Nigeria’s external debt and approximately four per cent of her domestic debt.
“Tinubu’s debt overshot his IGR, which is a net loss for Lagos. Besides, with AlphaBeta, are we sure the IGR got to the coffers of the Lagos government or to private hands?”

Continuing, the groups stated, “Furthermore, Keyamo averred that Tinubu is a good head hunter. How can that be true when he was responsible for head hunting Buhari?
“How can that be true when he brought in Ambode and fought with him? How can that be true when the electorate rejected his hand-picked governor in Osun and he lost the state to the PDP?
“If, as Keyamo said, Tinubu is a good manager of men and resources, then how come he is the first governor of the Fourth Republic to have fought with two of his own hand-picked deputy governors and instigated their impeachments?”
The Atiku groups asked, “If Tinubu promised to continue within Buhari’s good works, can he mention those good works? A man who wants to continue where Buhari stopped is definitely not the right choice for Nigerians.

“But besides the above, how can the Academic Staff Union of Universities be on strike for a record period, and the minister who is supposed to solve this national emergency, Festus Keyamo, has left his station to promote Bola Tinubu’s campaign? If this administration was serious, Keyamo should have been focused on the ASUU strike.

“His obsession with promoting Bola Tinubu at the cost of his responsibilities as Minister of State for Labour is another reason why the ASUU strike would not be solved any time soon and will move from an emergency to a crisis. This administration and Keyamo are more interested in politicking than in governance.”