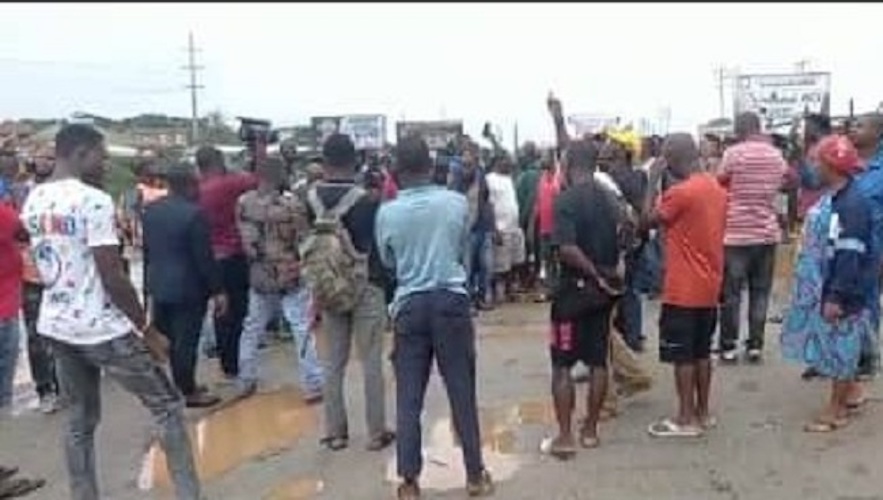 Commuters and motorists plying the ever busy Benin-Sapele road in Edo State  were stranded yesterday  as youths blocked the highway and its adjoining routes following the inability of the federal government to fix the failed portions.

The youths, in a peaceful protest, mounted canopies and chairs on the major roads while others  displayed  their wares for sales, an indication that they are not prepared to leave soon.

The aggrieved youths, on the platform of Freedom Ambassadors Organisations in conjunction with Sarbag/Sapele Road residents, had earlier warned residents in the state not to contemplate traveling Benin-Sapele road the next day.

Addressing journalists,  Chair-man, Sarbag/Sapele road axis, Mr. Daniel Omorogbe, said the blocking of the major road and its adjoining routes became necessary following series of deaths and unquantifiable man hours commuters spent on the road while trying to get to their respective destinations.

He said when the road got bad previously, they went on a peaceful protest which drew the attention of the Edo State government to commence work on it. But he added that to their  amazement, the federal government halted the ongoing work, claiming that it is its own sole responsibility to fix it and not the state government.

“Last year, we protested and the state governor came and made his promise that within 24 hours, he is going to mobilize contractors to come and work and really, he did. He came with Hartland and Levant contractors and after first day of their working, the federal government sent their troops.  I was there and nobody told me about it. They asked the contractors to stop the work because the road belong to the federal government and not to the state.

“And ever since, they have not been working. So, we did another letter to the Federal Ministry of Works, Abuja to Fashola, they replied us.

“They said the road has been awarded to Levant Construction company. I went to Levant and the contracting firm said they didn’t award the road to them.

“I did another letter again to Fashola, saying we want to have Sarbag meeting with him, they didn’t allow us to see him”, he said.

Omorogbe explained that  the residents of the environs have taken it upon themselves to avert unwarranted deaths on Benin-Sapele road and also put an end to the nightmares their children face when either going to school or returning from school.

“For us, our children cannot access their places on time. If our children are going to school, it  is a problem. Like the tanker that fell last two weeks there, supposed it happened in the afternoon, it would have been a disaster but the luck we had is that it happened at night.

“So, we feel the pains of our brothers who lost their lives. The person that died there the other time, his marriage should have been done last Friday, he is our brother.

“Last year, similar thing happened, somebody died under the bridge. So, the property that have been destroyed is unquantifiable.

The leader of the group threatened to remain on the road pending when the federal government mobilises its contractors to fix it.