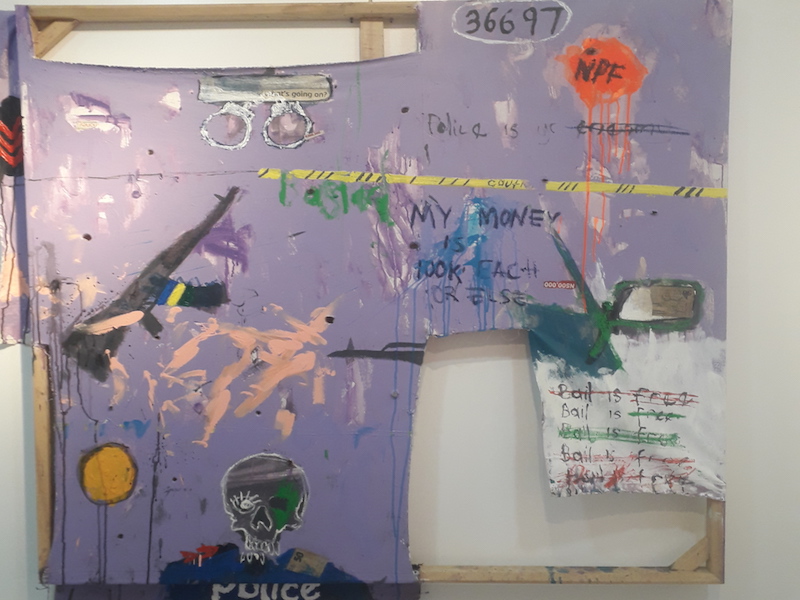 Artivism. That’s the summary of the body of works by three conscious artists who contemplate Nigeria’s socio-political climate ahead of the 2023 general elections. Bob-Nosa Uwagboe, Habeeb Andu, and Uche Uzorka relived on canvas the experience of every conscious citizen of Nigeria where they work and reside. The show which opened at AMG Projects gallery on April 30 took the viewer on a journey through life in Nigeria and the duty to change the narrative.

Andu was ushered into 2022 by some armed policemen along the Ibadan-Ijebu Ode axis. They stopped and searched, demanding his phone and car keys as he was dragged from the driver’s seat to the bare floor. Without any proof of a crime, they asked him to pay N100,000 before he could be released. Surrounded by bush, Andu made a tough decision and parted away with the money. That was broad day robbery- a routine practice along that axis.

His experience of police brutality informed his paintings executed on perforated canvas, using mixed media such as worn or stained school uniforms to depict the state of the nation.  Of course, the police who disposed of Andu of the cash would never know that he was the 2018 Winner of the Art X Prize 2017 which propelled his career. At this show, he called his body of works ‘Is Your Friend (Checkpoint)’ thus restating the message of the ‘EndSARS’ protest and the need for reform in governance while his piece titled ‘Downward’ explores social justice in the context of the disparity in the use of technology in the educational system.

On his part, Uwagboe is a multidisciplinary artist whose work, early in his career, has inspired him to establish Protest Art Studio, in Lagos. He won a joint grand prize at the National Art Competition, NAC, in 2011, organised by African Artists Foundation, AAF. Using elements of satire, Bob-Nosa Uwagboe’s art fearlessly defies conventional boundaries and political correctness. Through his body of work called ‘Stepping Forward,’ he offers commentary on a wide array of issues ranging from human rights to the role of religion in the decay of modern-day African societies. In his painting titled ‘Power’, he depicts a domineering force in military beret and boxing gloves to represent Nigeria’s past military regime.

In the same vein, Uche Uzorka creates narratives that define social issues. Using various media in his work, he explores the domino effects of systemic breakdown. Politics, the environment, education, and corruption are some of the recurring themes in his critically acclaimed body of work. Uzorka’s collection named ‘Desert Stations: The state of austere’ paints grim reality in the piece ‘Open borders’, showing how the country can easily disintegrate and by extension the dislocation that is occasioned by war, for example in Ukraine.

In its gallery statement, AMG Projects noted that artists were known to have contributed to issues that affect the socio-political directions of their environment. In Twenty Twenty-Three, Uwagboe, Andu, and Uzorka, who has a “well-documented history of pushing boundaries through work that is deeply rooted in activism will attempt to answer quite several questions within the context of agitation towards a greater Nigeria.”
At the opening reception for the show, Ayo Oshodi, the Associate Director of AMG Projects Gallery said:

We have an election year ahead and we know that the three artists are protest artists. We thought it is the best way to combine their love for such a message in their show.’’