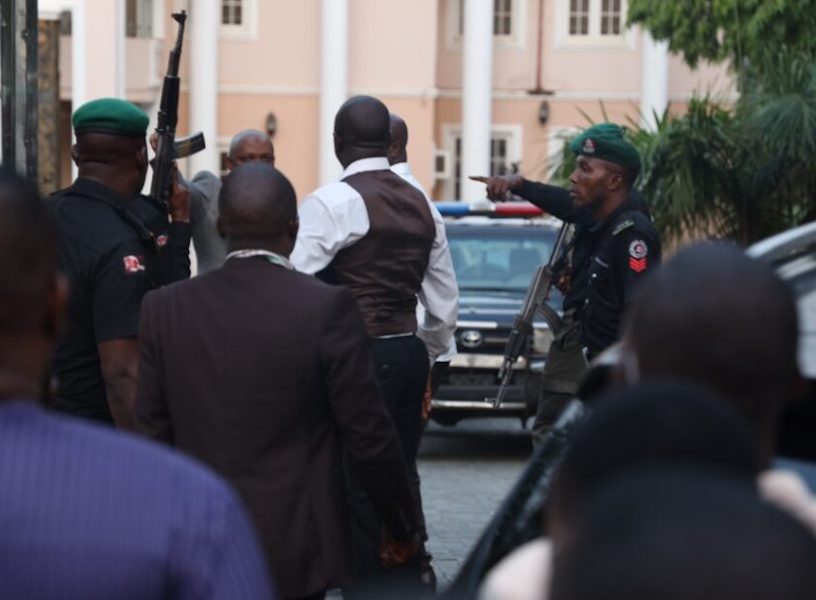 Policemen attached to the Economic and Financial Crimes Commission (EFCC) fired gunshots at the residence of former Imo State Governor, Rochas Okorocha, yesterday, as the commission moved to forcibly arrest him for jumping bail and refusing EFCC’s invitation.

In a commando operation, the operatives broke down the doors of Okorocha’s residence with heavy equipment and large stones, shattering the building’s ceilings and glass panels in the process.

One of the sons of the senator for Imo West Senatorial District was injured in the stampede that ensued following a sustained standoff between Okorocha’s supporters and security personnel.

The police also fired teargas to disperse the supporters of the presidential aspirant of the All Progressives Congress (APC). Teargas was also used inside Okorocha’s residence by the operatives before whisking him off at 6:41pm, THISDAY gathered.

Operatives of the commission had earlier yesterday stormed the Maitama, Abuja residence of Okorocha to effect his arrest. But Okorocha raised the alarm that the siege to his Abuja residence by men of the anti-graft agency was part of a grand plan to truncate his presidential ambition.

The senator, who addressed journalists inside his room, said the EFCC, which later reinforced and returned with additional men, had threatened to break the doors and forcefully take him away on the day of the APC presidential screening.

Okorocha said, ”Frankly speaking, the situation I find myself is what I call hostage. Policemen and EFCC operatives are currently in my compound and possibly to whisk me away and my gate is blocked.

”All I am asking for now is to allow me to go for my screening because I am a presidential aspirant and our election comes up on Sunday. If I am not allowed to go for this screening, I may miss it.”

He added, “I am not an unknown person in the country. I have an address and people know me in the country. All what it takes for the EFCC is to send me an invitation and I will gladly oblige.”

However, a statement issued later by the EFCC stated that the agency was after Okorocha following his refusal to honour an invitation extended to him after jumping bail.

The statement claimed, “Operatives of the Economic and Financial Crimes Commission (EFCC), today May 24, 2022, arrived at the Maitama, Abuja home of a former governor of Imo State, Senator Rochas Okorocha, to effect his arrest.

“The move followed the refusal of the former governor to honour invitations after jumping the administrative bail earlier granted him by the commission.”

The statement signed by the spokesman of the commission, Mr. Wilson Uwujaren, further said EFCC had on January 24, 2022 filed a 17-count criminal charge bordering on diversion of public funds and properties to the tune of N2.9 billion against Okorocha.

It said the case was assigned to Honourable Justice Inyang Ekwo of the Federal High Court, Abuja, but attempts to arraign Okorocha were twice stalled owing to the absence of the ex-governor who evaded service of processes.

At the last adjourned date, March 28th, 2022, Ekwo, before adjourning until May 30th, 2022, warned that it was “the last adjournment I shall grant in this matter,” that statement alleged.

The agency also stated, “in the circumstances, the commission is left with no option than to effect the arrest of Senator Okorocha and bring him to trial.”

The EFCC team was able to arrest Okorocha at 6:41pm in an operation that started around 10am.