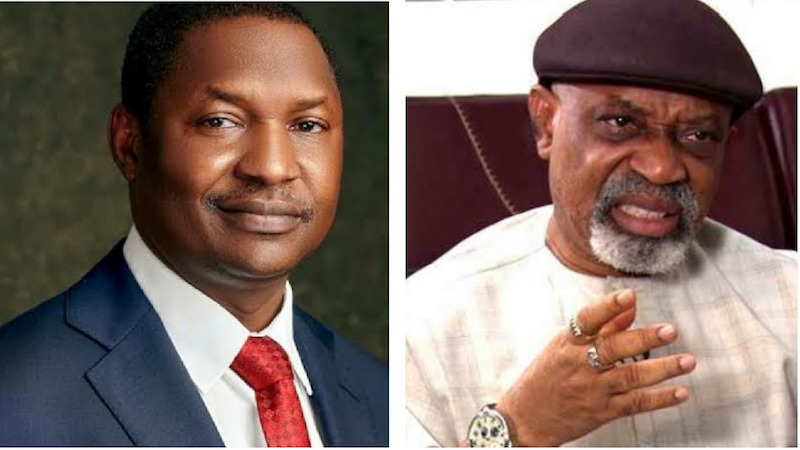 The Attorney-General of the Federation and Minister of Justice, Mr Abubakar Malami (SAN), yesterday said there was never a time he resigned from office.
The Minister of Labour and Employment, Dr Chris Ngige has also clarified that he did not write or tender any resignation letter.

Malami said he only stepped down his ambition to contest the governorship race of Kebbi State.
Malami was one of the 10 ministers whom President Muhammadu Buhari held a valedictory session for on Friday after they had declared interest in elective positions.

There were reports that Malami had equally resigned.
But speaking with THISDAY in Abuja yesterday, Malami’s spokesman, Dr Umar Gwandu, said his boss never resigned as the Attorney-General of the Federation and Minister of Justice.

“Malami has the right to choose to voluntarily shelve his gubernatorial ambition. It is a matter of personal conviction and individual rights which didn’t violate any law.
“Right thinking members of the society accord respect to individual’s right to freedom of choice in matters relating to this,” Gwandu added.

According to the statement, “the decision is not only a demonstration of altruism and patriotism but of contentment, self-control, placidity and decisiveness in problem-solving at a time shrouded with confusing and competing for stimulus. It is a commendable posture worthy admiration coming from a paragon of virtue.”
President Buhari had last Wednesday ordered all ministers with political ambitions to resign.

Meanwhile, the Minister of Labour and Employment, Ngige has also denied resigning from office as minister. He dismissed the claim by human rights lawyer, Mr Femi Falana (SAN) that he withdrew his resignation letter after the valedictory session with President Buhari.

In a statement issued by his Media Office in Abuja, Ngige said he neither wrote nor submitted a resignation letter.
He said Falana was embarrassing the public with fake news.

The minister’s statement read in part: “Dear Femi Falana (SAN), you conjured a resignation letter, hung it on Senator Chris Ngige and went to town with it. That is very bad. How a senior lawyer descended to this trade in falsehood and phantom benumbs!

“You went ahead to extrapolate legal opinion not necessary for reproduction here. However, the problem is that when there is so much haste to find fault and condemn, fidelity to facts and details is lost and society suffers on account of this. We pray you fall no further into this demeaning situation.

“Get your facts, right Sir.  First is that the Honourable Minister of Labour and Employment, Senator Chris Ngige neither authored nor submitted a resignation letter to the president or ‘any other person authorised by him. Therefore, the resignation letter you referred to does not exist.

“The Circular of  May 11,  2022, from the  Secretary to the Government of the Federation, gave on or before Monday, May 16, 2022, as the terminal date for submission of resignation letters, not just for ministers but for all political appointees of the federal government,” the statement said.

The statement noted that Ngige had an audience with Buhari on May 11, 2022, and followed it up with another on  May 13, 2022, adding that “in none of these occasions was a resignation letter tendered.”

The statement said that it was a well-considered decision for Ngige to withdraw from the 2023 presidential race in deference to opinion, arising from consultations with family, constituents, supporters and well-wishers who held the interest of the nation topmost.

The statement disclosed that Ngige did not fill or return the APC’s Expression of Interest/Nomination form.
“Though his supporters had taxed themselves to procure these forms for him, he did not fill and return them to the party.

The statement urged Falana to “affect the necessary correction within forty-eight hours as a check on the wrong impression your position has created before the public.”