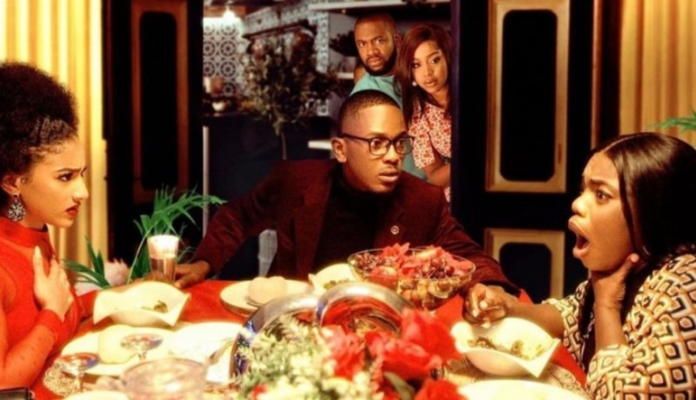 “Dinner at my place” is a romantic comedy with element of humour, suspense and intrigues. It tells the story of Nonso (Timini Egbuson) who plans to propose to his girlfriend Chioma (Sophie Alakija) over dinner at his place where he intends to pop the question. “I’m going to ask Chioma to marry me”, he tells his friends. However things take a turn for the worst when his ex-girlfriend Bisi (Bisola Aiyeola) shows up uninvited in her usual dramatic style.

From the synopsis and fantastic cast, the movie promises a fun watch and a perfect date movie for one, your partner and family to see at the cinemas, especially for the coming season of Valentine. ‘Dinner At My Place’ is just another feel good m

ovie, written and directed by Kevin Apaa, produced by Chiamaka Ebochue for Duku Pictures, and entirely shot in Lagos. It has Filmone Distribution on its delivery wheel.

“Get ready for a love story like never before! ‘Dinner At My Place’ is about to blow your minds away”, Apaa’ post reads. “It’s one movie you don’t want to miss”.

On the choice of Timini and Sophie as the lead, Apaa explained to this reporter in a chat: “Timini and Sophie are undoubtedly talented and fantastic actors. I had seen them done quite a number of great movies in the past. I saw how they embodied their character and interpreted them very well.

“So I could tell that they were going to be a great cast to work with. Also the fact that Timini and Sophie are both young at heart, I knew they were the perfect match to connect with my target audience. And right now I feel it was a great decision I made to work with them on this project because their energy and chemistry in this movie is simply beautiful.”