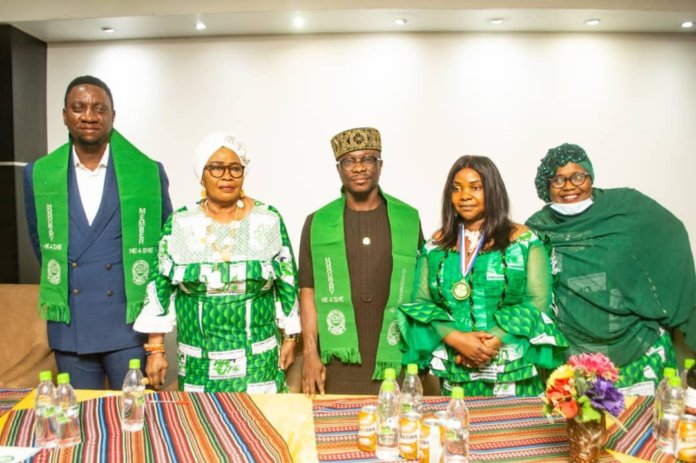 When the iconic American singer-songwriter, John Legend, said all men should be feminists, he certainly didn’t have Kalada Meshack-Hart, the CEO of Engage Empower Educate Initiative (EEEI), in mind. This contributes to the belief that the world is better off when women are empowered, as it leads to a better society. The lifestyle of the Meshack-Hart, aptly epitomises John Legend’s statement.

It was therefore, no surprise, when the National Council For Women Societies (NCWS) at the swearing in ceremony of the new executives of the Rivers State executive of NCWS on the 19  December last year honoured Meshack-Hart as a “He for She” ambassador.

The event was held at Golden Tulip Hotel in Port Harcourt the Rivers State capital. The State Governor,  Nyesom Wike, was represented by Secretary to the State Government (SSG), Dr. Tammy Danagogo, amongst other creme de la creme.

Meshack-Hart, who is also the founder of Coalition of African Women for Peace and Development (COWAP), clinched an honourary membership of NCWS, the only organisation recognised by the federal government as an umbrella body for all Nigerian women with offices in all the 774 local governments.

Meshack-Hart is described as a man whose resilience and selfless service to the female community has earned him this accolade. He prides his life’s goal “to empower the woman and the girl child”.

This was evident in the Dubai 2021 African Women Summit organised by the COWAP, where Liberia’s Vice President, Jewel Howard Taylor; Abdul Samad Rabiu, Chairman of BUA Group; Aliko Dangote, CEO of Aliko Dangote Group; and Turkish Airline and others were honoured, Meshack-Hart highlighted that women and girls’ empowerment is the thrust of his NGO.

He affirmed: “Women at all levels are critical to national development, and bear the brunt of hardship, thus anyone empowering them is a hero to us.”

“The Back to School Initiative”, according to the founder, came to life at the 2021 African Women Summit which was held in Hilton Alhabtoor Hotel, Dubai, the United Arab Emirates. In the same August, his NGO launched African Women’s County Estates, the first monosexual (can only be purchased by or only in the name of a woman) estate in Nigeria in collaboration with Kairos Hof. It is targeted at equipping women to own a house with a 50 per cent discount of the normal rate.

He has also successfully steered many pet projects like the COWAP, a project put together with an aim to harness the enormous capacity and goodwill of women in Africa by bringing them under a coalition towards achieving four thematic points that align with the Sustainable Development Goals (SDGs) including Peace in Africa, Girl-child education, Ending hunger in Africa, and Ending poverty in Africa.

Last November, his NGO held a two-day masterclass for women-led NGOs in Nigeria at the training room 302, Novare Central Mall, Dalaba Street, zone 5, Wuse, Abuja. Over 500 women-led NGOs applied to be selected for the training but only 50 were privileged to be chosen for the workshop. The participants were drawn from a few states in Nigeria including Bauchi, Kaduna, Lagos and the FCT.

Indeed, Meshack-Hart is a man of the girl child and women. He has been able to attain all these and more because of his insatiable passion to engage, empower and educate the women and girl child community. As the “He for She” ambassador, he has folded his sleeves to go the extra mile.

Kahera Travels Expresses Optimism on Return of Festac 45 Years After