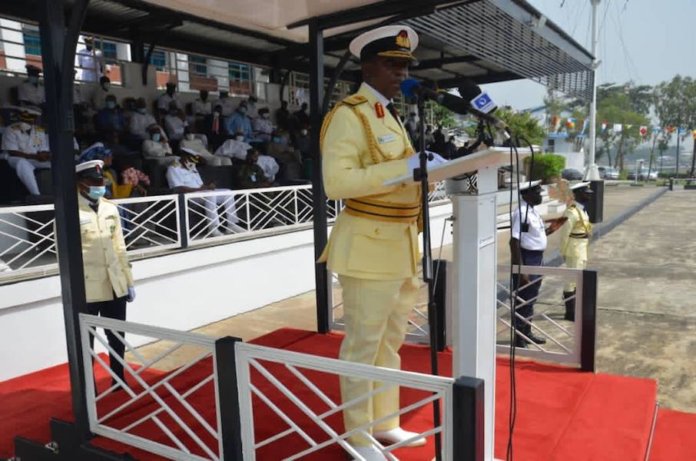 Shettima who commanded the premiere base was also the Maritime Component Commander, Operation Awatse.

In his valedictory remarks, Rear Admiral Shettima, who gave account of his stewardship, said the base made considerable progress in the areas of welfare, operations and infrastructural development, adding that strategies were articulated upon his assumption of command to safeguard maritime-based resources and assets, reduce incidences of oil theft as well as ensure general improvement in the overall security of his Area of Responsibility (AOR).

He said: “NNS BEECROFT’s strategic location in the busiest and largest economic zone of the country puts a lot of responsibility on the base as its functions have direct bearing on the socioeconomic well being of Lagos State, the South-west and the nation at large.

“Accordingly, the base leveraged existing cooperation of the Lagos State government, relevant stakeholders in the maritime sector and other security agencies to synergise efforts at enhancing the security of all key and vulnerable points.

“I am pleased to state that the strategy paid off and gave spur for the operational successes achieved by the base.

“For instance, unlike in the past when pipeline vandalism and oil theft were rampant, a robust and vigorous security strategy by the base led to a massive reduction in the activitives of these vandals who attempt to siphon and sell these stolen products at the detriment of the nation’s finances.

“Under my watch, the base conducted numerous operations which led to the dismantling of many illegal connections along our pipelines.

“These efforts by the base have led to a reduction of PMS losses along this line from 27.25 per cent in the past, to less than five per cent today saving the nation billions of naira.

“This was achieved through clearance operations at the Atlas Cove and Tarkwa Bay, which used to be havens for pipeline vandals and criminal syndicates, resulting in significantly fewer disruptions to NNPC operations within the area.

“Additionally, the base conducted patrols which led to the arrest of several vessels involved in illegal bunkering and other illicit activities. All the vessels were handed over to appropriate prosecuting agencies.”

On the role the base played during the #EndSARS protest last October, Rear Admiral Shettima said they safeguarded critical infrastructures, office and private properties and carried sting operations to recover loots worth several millions that were handed over to the state government for return to the rightful owners.

On infrastructural renewal of the base, he said:

“A key aspect of my stewardship as Commander NNS BEECROFT was geared towards the infrastructural renewal of the base. This was aimed at improving the overall security, functionality and aesthethics of the base.

“Some of the projects undertaken include the construction of an automated main gate, complete rehabilitation of the motor transport yard, provision of additional office spaces for officers and the renovation and equipping of the operations rooms.

“Others include the installation of a 60 camera high definition CCTV surveillance system which covers the base as well as its seaward approaches.

“Addtionally, the parade ground stand which we are seated for this ceremony was completed and recently commisioned during our watch.

“Another key area of the base’s achievement during my tenure was the welfare of personnel and civilian staff, which was accorded high priority. These include various projects executed to boost personnel morale and the wellbeing of their families.”