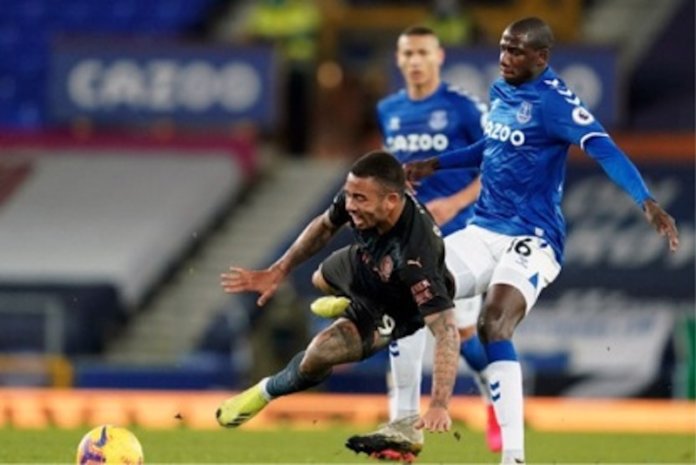 Manchester City will be looking to stay on course for an unprecedented quadruple when they travel to Everton for an FA Cup quarter-final today. The Citizens are still fighting on all four fronts this season and will be confident of moving into the last four of the FA Cup at the expense of the Merseysiders

Manchester City’s pursuit of an unprecedented quadruple continues today as they travel to Everton for the quarter-finals of the FA Cup.
The Toffees advanced to the last eight courtesy of a thrilling 5-4 victory over Tottenham Hotspur last time out, while Man City eased past Swansea City to book a trip to Goodison Park.

Since Everton’s memorable win against Tottenham in the fifth round of the FA Cup, their fortunes have been mixed to say the least. Carlo Ancelotti’s men have marched to victories over West Bromwich Albion, Southampton and most notably, Liverpool, but back-to-back defeats to Chelsea and Burnley have left them five points adrift of the Champions League places with 10 games left to play.

Furthermore, the Toffees head into their battle with Manchester City having lost three of their last four on home soil – as a spate of injuries continues to bedevil Ancelotti – but they have already recorded their best finish in the FA Cup since the 2015-16 campaign, when they were eliminated by Manchester United in the semi-finals.

Playing in front of an empty Wembley is something that teams will likely never get used to, but having the opportunity to step out onto that turf is more than enough motivation for Everton to try to pull off a monumental shock this weekend, and they have managed to prevail in their last four FA Cup matches at Goodison Park.

However, with just two wins to boast from their last seven on familiar territory, Everton would need a huge slice of luck to get one over Manchester City, who recently saw a disagreement between player and manager over their chances of a famous quadruple.
Man City left-back Oleksandr Zinchenko affirmed that the runaway Premier League leaders are in with a realistic shot of four trophies this season, but Pep Guardiola was quick to refute the Ukrainian’s comments by claiming that a quadruple is “never” likely to happen in football.
However, if any team is capable of completing a clean sweep of trophies, it is Man City, who have an EFL Cup final against Tottenham Hotspur to look forward to next month after easing past Borussia Monchengladbach 4-0 on aggregate to book their spot in the quarter-finals of the Champions League.

As expected, Man City needed no time at all to get back on track after their shock derby defeat to Manchester United as they have strung a set of three consecutive wins together – amassing 10 goals in that run – and they will be determined to improve on their 2019-20 FA Cup run, where Arsenal surprisingly knocked them out in the semi-finals.

The 2019 FA Cup winners could make the last four of the competition three years in a row for the first time since 1934 this week, and they head to Goodison Park having prevailed in 10 of their last 12 FA Cup ties away from home – most recently losing to old foes Wigan Athletic in 2018 – and their current winning streak on the road in all competitions now stands at 13 matches.

Only in two of those games have City failed to chalk up more than one goal, and Guardiola has witnessed his side come up trumps in their last six encounters with Everton, who also lost to Man City at this stage of the FA Cup in the 1980-81 campaign.

However, City’s midfielder, Kevin De Bruyne has warned his colleagues not to be distracted by dreams of an unprecedented quadruple.
City defender, Oleksandr Zinchenko irritated Guardiola this week with his brash claim that they have the “best players in the world” and are facing the “most important two months of our careers”.
Guardiola was quick to rebuke his defender for getting ahead of himself and, aware how tough it is to challenge in so many competitions, City midfielder De Bruyne agrees.

City won the domestic treble in 2019, but missed out on Champions League glory after losing to Tottenham in the quarter-finals.
“I remember people two years ago were saying that we could win it, but it’s very hard,” De Bruyne said after his superb goal in City’s victory against Moenchengladbach on Tuesday.

“The amount of games and the physical and mental ability you need to have as a player or as a squad is very high. We try to do our best and focus game by game. That is the only thing we can do.”
Everton have not won a major trophy since the 1995 FA Cup and they go into the City clash after two successive league defeats.
Chelsea will be expected to extend their unbeaten run under Thomas Tuchel to 14 matches when they host struggling Sheffield United in the last eight.
Ahead of Sunday’s trip to Leicester, Manchester United boss Ole Gunnar Solskjaer said United’s progress under his leadership should not be judged solely on trophies.

Second-placed United have improved in the Premier League this season.
But, with the club waiting for their first silverware since 2017, Solskjaer could do with FA Cup success to keep the critics off his back.
“Sometimes a trophy can hide the other fact what’s happening at the club,” Solskjaer said.
“But of course we’re aiming to win because that’s why you play football. You’re always aiming to win trophies.”
Since reaching the quarter-finals, Southampton have been dragged towards the relegation zone after five defeats in their past seven games.
Their south-coast derby at Championship side Bournemouth — the only non-Premier League team left in the tournament offers a chance to get back on track before returning to the tense fight for survival.