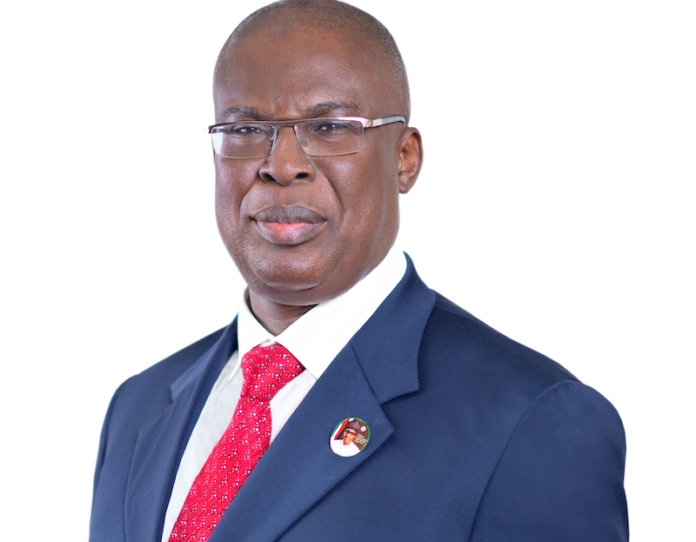 Undoubtedly, the COVID-19 pandemic has affected economies all over the world, Nigeria inclusive. Thus as part of measures to ensure an efficient oil and gas sector post-COVID, the Ministry of Petroleum Resources will on March 29 launch the Decade of Gas Agenda, which is a critical transition to help battle global warming and function as a bridge between the dominant fossil fuel of today and the renewable energy of tomorrow, Nume Ekeghe reports

Given the clamour for climate change and renewable energy, the need to transition from the dominant fossil fuel of today to natural gas has become imperative. In fact, the Minister
of State for Petroleum Resources, Timipre Sylva, noted that the federal government has strategically focused on our vast natural gas resources, as a critical transition fuel to help battle global warming and function as a bridge between the dominant fossil fuel of today and the renewable energy of tomorrow.

Noting that the federal government is strategising to ensure an efficient oil and gas sector in the post-COVID-19 era, he declared year 2021 to 2030, the decade of gas in Nigeria. According to him, FG’s strategy to strengthen the Nigerian oil and gas industry in a post-COVID-19 world is to transform the national oil company into a diversified energy holding company.

“This will enable us to respond swiftly to the twin challenges of a future crash in crude oil prices and decarbonisation, by moving rapidly to becoming an energy holding company with more diverse interests.

“Consequently, we have strategically focused on our vast natural gas resources, as a critical transition fuel to help battle global warming and function as a bridge between the dominant fossil fuel of today and the renewable energy of tomorrow.

“Natural gas has the intrinsic ability to meet the increasing global requirement for cleaner primary energy use, while at the same time, enabling much needed domestic industrialisation for rapid economic growth in very few endowed countries, such as Nigeria,” he said.

Sylva noted that substituting traditional white products with gas would cushion the effect of the deregulation of the downstream petroleum sector and stimulate economic growth. He added that it would further improve Nigeria’s energy mix; drive investments and create enormous job opportunities for Nigerians.

Hybrid Event
Thus, as part of measures to achieve the aforementioned goals, experts will on March 29 converge on the Transcorp Hilton, Abuja under the auspices of Federal Ministry of Petroleum Resources’ Nigeria International Petroleum Summit (N.I.P.S) for a hybrid conference and high-level networking session.

The event, which is a pre-summit conference of the 2021 NIPS, with Nigeria LNG Limited (NLNG) as sponsors, is in furtherance of the Federal Government’s declaration of January 1, 2021 to December 31, 2030 as “the Decade of Gas Development for Nigeria”. “The Decade of Gas” conference with the theme, “Towards a Gas-powered Economy by 2030” will feature President Muhammadu Buhari, as special guest of honour.

James Shindi, Chief Executive of Brevity Anderson, organisers of the conference, observed that as a hybrid event, critical stakeholders will be deliberating physically in Abuja, with the public participating actively from the comfort of their homes via the interactive virtual platform. The sessions will also be recorded and can be assessed on demand even after the event for those who will be unable to follow the event live.

Global Developments
According to the stakeholders in the gas industry, global developments have presented an opportunity for the government to reappraise its gas agenda, with a view to increasing its reserves and domestic utilisation, especially for power generation and transportation.

Given the scepticism around oil rebound, they urged that regulations and strategic frameworks be developed to encourage players in the sector. Managing Director, NLNG, Tony Attah, said the firm would increase its allocation of LPG to the domestic market from 350,000 metric tonnes (MT) to450,000MT by 2021.

He said the move is aimed at supporting the Federal Government’s plan to deepen LPG (cooking gas) penetration in Nigeria. He said: “We have helped to reduce flaring by over 65 per cent, and moved Nigerian from the second position to the seventh having created the avenue to monetise gas. This has also helped us to bring major earnings to the economy. We can become the fourth largest reserve of gas if we exploit and develop the over 600trillion cubic feet (tcf) of gas yet to be explored. “Nigeria is a gas nation but keeps focusing on oil. More than just agreeing to make 2020 the year of gas, we need to declare the decade for gas.

“With the transition in the global economy and the challenge of peak oil, we will have no choice but to shift focus to gas,” he added.

Decrying the paradox of Nigeria’s status as a gas nation, and underscoring the urgency of addressing local LPG supply deficits in the country, Attah noted that some 100,000 Nigerian women and girls in the rural areas form part of the one million fatal casualties of kitchen fumes yearly.

Commitment Towards an Industrialised Nation

Meanwhile, the Federal Government of Nigeria has demonstrated its commitment towards the objective of transforming the country into an industrialised nation driven by gas, through policies and projects like the NLNG T7 Project, the National Gas Expansion Programme, Autogas policy and the construction of the 614km Ajaokuta-Kaduna-Kano (AKK) gas pipeline. These initiatives and projects are expected to stimulate economic growth, further improve Nigeria’s energy mix, drive investments, and provide jobs in the country.

NLNG Train 7 Project which will increase our production capacity by 35 per cent from the current 22 Million Tonnes Per Annum (mtpa) to 30mtpa.

This expansion will ensure that Nigeria, with its significant gas reserves (202 tcf of proven gas reserves, the 9th largest in the world) remains a top, reliable and preferred supplier of LNG in the ever-expanding energy world.

On December 27, 2019, NLNG’s Shareholders took Final Investment Decision (FID) for the Project and on 13th May 2020 awarded the Engineering, Procurement and Construction (EPC) Contracts for the Project to SCD JV Consortium, comprising affiliates of Saipem, Chiyoda and Daewoo.

Train 7 means growth for the Nigerian oil & gas industry. Over USD10 billion is expected to be invested in Train 7 and the upstream scope of the LNG value chain which will open up new development opportunities in the industry and boost Nigeria’s Foreign Direct Investment (FDI) profile as well as the confidence of foreign investor.

The project is anticipated to create more than 12,000 new jobs during the construction stage, and on completion, it will help to further diversify the revenue portfolio of the Federal Government. It will also increase its tax base. The Project will also support the development of local engineering and fabrication capacity.

​The 614km Ajaokuta-Kaduna-Kano (AKK) natural gas pipeline, which will traverse Kogi, Niger, FCT, Kaduna and Kano, and feed power plants and industries along the corridor, has taken off. NNPC has paid the 15 percent counterpart funding for the $2.9 billion project, while the Federal Executive Council (FEC) approved the issuance of a sovereign guarantee to cover the rest of the funding, coming from the China Export and Credit Insurance Corporation.

Nigeria LNG Limited concluded Final Investment Decision (FID) on its Train 7 project at the end of 2019, and signed an EPC contract for the project in May 2020. A financing arrangement worth 3 billion US dollars was also concluded, the largest financing deal in Africa so far in 2020. NNPC owns a 49 per cent stake in NLNG, on behalf of the Nigerian Government.

Push for Wider Adoption of LPG, CNG
The Ministry of Petroleum Resources is driving the Autogas project. Sylva has been working hard to ensure a wider adoption of Liquefied Petroleum Gas (LPG) and Compressed Natural Gas (CNG) to ease pressure on petrol imports.

Sylva said the conversion of vehicles in his ministry and agencies shows that the government is working on the use of Autogas nationwide and supports its declaration that 2020 as the year of gas.

To ensure seamless access to autogas, Buhari directed Sylva to work out the pump prices of the CNG and the LNG. The President gave the order at the virtual launch of the autogas scheme, during which he urged Nigerians to embrace gas as alternative fuel for their vehicles.

As a demonstration of the government’s commitment to the project, Sylva had launched the autogas station at the Nigerian National Petroleum Corporation (NNPC), Lugbe, Abuja which served as a showcase for the launch of the National Gas Expansion Programme and National Autogas Roll-out Initiative.

He also launched the five gas-fueled buses at the venue, which he handed over to the Nigerian Labour Congress (NLC).

The five buses were just a tip of the iceberg as Sylva revealed that the government will release 100 of the buses to the union going forward.

At a virtually held event at the State House to unveil the National Gas Expansion Programme and National Autogas Roll-out Initiative, President Buhari urged Nigerians to embrace the use of gas as an alternative to fuel, President Buhari said: “It is no longer news that the vast Natural Gas resources, which Nigeria is endowed with has hitherto been used sub-optimally as a result of a dearth of gas processing facilities and infrastructural connectivity for effective and optimal domestic utilisation.

“With a proven reserve of about 203 trillion Cubic Feet (TCF) and additional upside of 600 TCF ranking Nigeria as the 9th in the world currently, the need for domestic gas expansion and utilisation is apparent,” he said.

The president said the autogas initiative will lead to increased domestic gas utilisation and enrich the trajectory of national economic growth and development, even as he encouraged everyone to embrace gas in form of LPG, CNG and LNG as an alternative fuel for autos and other prime-movers.

The National Gas Expansion Programme was initiated last year to boost the utilisation of gas in the short and medium-term and it is expected to create two million jobs per annum, promote skills acquisition and enhance technology transfer in addition to growing the nation’s Gross Domestic Products (GDP).