APC Govs, NWC Fail to Agree on Campaign Kick off Date 42 mins ago 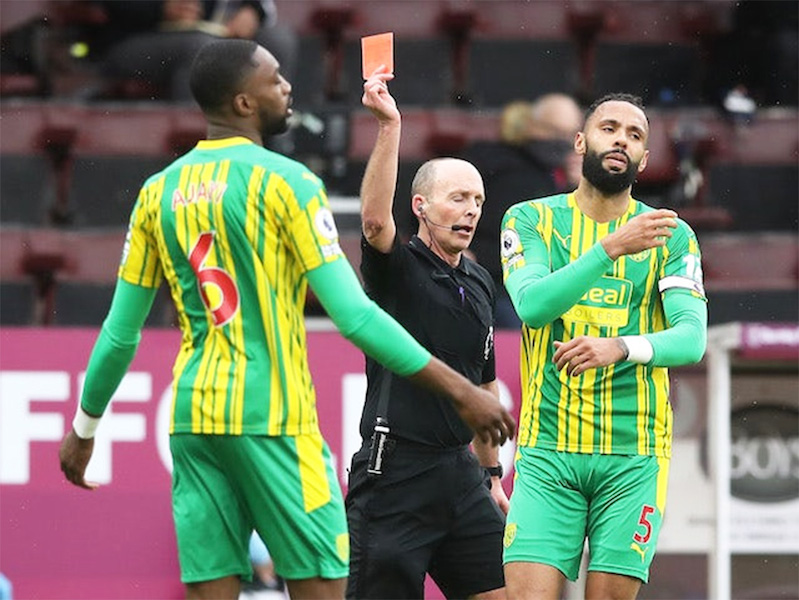 Nigerian international, Semi Ajayi added to the woes of West Bromwich Albion in the English Premier League yesterday after he was sent off at Burnley for a professional foul.

Although West Brom picked a point in the goalless draw with Burnley, they remained stuck to 19th spot on miserable 14 points from 25 matches in the English Premier League.

The Super Eagles defender received a straight red card for the foul after he handled the ball when he was the only player left between Burnley and goal. The Video Assistant Referee (VAR) confirmed the foul half an hour into action.

Before his dismissal, Ajayi had played every minute of this league season and even scored twice.

Despite the red card and the draw result, West Brom boss Sam Allardyce insisted his side produced one of the best performances by 10 men he has seen in recent time.

And although the point did little to boost their hopes of avoiding relegation – they are 11 points adrift of safety – Allardyce was pleased with what he saw.

“We are showing how much we are improving,” he told reporters in his post match interview.

“That was one of the best 10-man performances I have ever seen in my time.

“I have actually won a lot of games with 10 men, and this one well deserved a win with 10 men, but unfortunately we have to kick ourselves for missing golden opportunities.”

Matheus Pereira was the chief culprit in that respect. The Brazilian somehow missed his kick in the middle of the six-yard line with only Nick Pope to beat after being set up by Mbaye Diagne.

In the melee that followed, Pereira failed to turn home an Ainsley Maitland-Niles cross as James Tarkowski eventually cleared.

Pereira also went close in the opening period with a low

Elsewhere in the Premiership yesterday, Ralph Hasenhuttl insisted that he hoped Southampton’s 1-1 draw against Chelsea was the start of his side returning to their normal selves after they ended a run of six successive Premier League defeats.

The hosts took the lead against the run of play in the first half when Nathan Redmond played a brilliant ball to send Takumi Minamino clear and the on-loan Liverpool striker showed great composure to slot beyond Edouard Mendy.

But the Saints gifted Chelsea an equaliser eight minutes after the break when Danny Ings brought down Mason Mount inside the box and the Blues midfielder stepped up to send Alex McCarthy the wrong way from the penalty spot.

Chelsea were unable to kick on after that and instead it was Southampton who went closest to grabbing a winner as Jannik Vestergaard hit the crossbar with a header before Ings put the loose ball into the side-netting.

However, Saints manager Hasenhuttl was satisfied with a positive result in light of their recent torrid run.