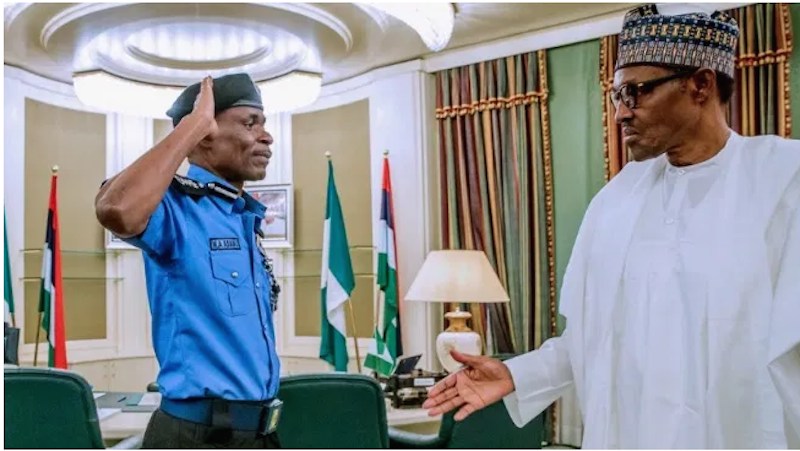 Some senior advocates of Nigeria (SANs) and the Peoples Democratic Party (PDP), yesterday assailed Buhari for extending the tenure of the Inspector-General of Police, Mr. Mohammed Adamu.

They declared his action as violating the 1999 Constitution as (amended) and the Police Act (2020).
Adamu, who was billed to retire on Monday having clocked 35 years in service has been discharging the functions of his office since then.

However, the president yesterday ended speculations over the leadership of the police force, by extending Adamu’s tenure by three months.

In addition, he directed the police authorities to intensify the search for Adamu’s successor.
Yesterday’s extension of Adamu’s tenure confirmed THISDAY’s exclusive report on Wednesday that the president was more disposed to granting him a tenure extension than allowing him to retire within the stipulated time.
The president said the extension of Adamu’s tenure was to allow for a smooth handover by the outgoing IG.

Minister of Police Affairs, Mr. Mohammad Dingyadi, told State House reporters in Abuja that Adamu’s tenure elongation will allow for proper screening of all qualified senior police officers before the eventual choice of a new IG.

He said: “Mr. President has decided that the present IG, Mohammed Adamu, will continue to serve as the IG for the next three months to allow for a robust and efficient process of appointing a new IG.

“This is not unconnected to the desire of Mr. President to not only have a smooth handover but to also ensure that the right officer is appointed into that position. Mr. President is extending by three months to allow him to get into the process of allowing a new one.”

Asked if the announcement coming three days after Adamu was due for retirement will not create a lacuna, the minister said “there’s no lacuna. Mr. President can decide to extend his tenure for three months.”

However, criticisms greeted the president’s decision with some senior lawyers and the main opposition party, describing it as illegal. They said neither the constitution nor the Police Act confers on Buhari powers to extend the tenure of an IG after retirement.

According to Mr. Akinlolu Kehinde (SAN), while both the 1999 Constitution and the Police Act empower the president to appoint and sack the IG, they did not empower him to extend the IG’s tenure after retirement.

“Section 7(6) Police Act, 2020, however, provides that the IG shall hold office for a period of four years. Both the Constitution and the Police Act, 2020 are silent on the power of the president to extend the tenure of the IGP.

“The Police Act 2020 and the constitution are also silent on renewal of the office.
“I am of the opinion that the extension of the tenure of the IG for a period of three months by the president is unconstitutional.”

Similarly, Mr. Dayo Akinlaja (SAN) said Adamu cannot continue in office as IG because he is no longer a serving member of the Nigeria Police Force having attained 35 years in service.

“It is my humble view that the president does not have such power considering the fact that both the constitution and the Police Act (as amended) envisage that a person in the office of the IGP must be a serving member of the NPF.

“Once a person has retired or reached retirement age, it follows in my opinion that the person is no longer (in the eye of the law) in the service and as such disqualified to continue in the capacity of IG,” he stated.

Also human rights lawyer, Mr. Ebun-Olu Adegboruwa (SAN), described the extension of the tenure of Adamu as illegal and unconstitutional.

Adegboruwa explained that when the tenure of an IG expires on the basis of the mandatory 35 years of service, it cannot be extended.
He cited Section 215 (1)(a), Section 216(2), paragraph 27 of the third schedule of 1999 Constitution to support his argument.

He said: “When the tenure of a serving IG expires on the grounds of completing the mandatory 35 years of service, he cannot be asked to continue in office beyond his mandatory tenure.

“Under and by virtue of section 215(1)(a) of the Constitution and section 7(3) of the Police Act, 2020, only a serving member of the Nigeria Police Force can be appointed as IGP. Mr. Adamu, having completed his mandatory years of service in February 2, 2021, cannot be appointed as IG, from outside the force.”

He added that Buhari lacks the power to “reabsorb a retired police officer” to the force under the pretext of “purported tenure extension.”

He said with Buhari’s action, the country does not have an IG recognised by law.
Human rights activist, Chief Mike Ozekhome (SAN), also described the extension of the tenure of Adamu as “patently and outrightly unconstitutional, illegal, and even immoral.”

Ozekhome stated that Sections 214, 215 and 216 of the 1999 Constitution and Section 7 of the Nigeria Police Act are quite clear that any action by Adamu after February 1, 2021, is null, void and of no effect whatsoever.

He blamed what he described as “sectionalistic, prebendalistic and nepotic forces” for the alleged wrong action of the president.

He stated that that was how the president was led to keep now suspended Chairman of the Economic and Financial Crimes Commission (EFCC), Mr. Ibrahim Magu, perpetually in office in acting capacity contrary to the law.

Ozekhome said both the constitution and Police Act are clear on the powers of the president on the appointment and sacking of the IG.

“Section 18(8) of the same Police Act 2020 states: ‘Every police officer shall on recruitment or appointment, serve in the Nigeria Police Force for a period of 35 years or until he attains the aged of 65 years, whichever one is earlier.’

Ozekhome said the use of the word shall by the provision of the Act makes it impossible for the tenure of the IG to be extended by any person.

According to him, the president cannot administratively amend the Police Act, 2020, by extending the tenure of the IG.

“The executive does not make laws. It executes laws made by the National Assembly, as provided for in section 214 (2) (a),” he added.

Also reacting, the PDP yesterday said the extension of the tenure of Adamu showed that Buhari’s administration has no respect for the law.
National Publicity Secretary of the party, Mr. Kola Ologbondiyan, accused the Buhari administration of flouting the constitution.