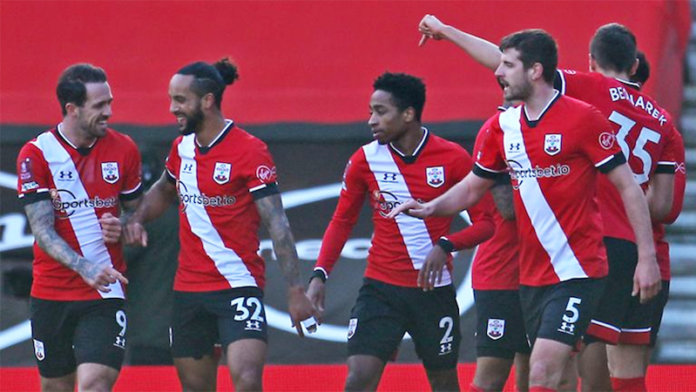 Mikel Arteta’s woes as Arsenal Manager increased yesterday after Southampton knocked holders Gunners out of the FA Cup in the fourth round courtesy of a first-half own goal on Saturday.

The Saints were rewarded for their attacking intent in the opening period when Gabriel turned in Kyle Walker-Peters’ cross in the 24th minute.

It was the first goal Arsenal had conceded in 508 minutes as they suffered a first loss in seven matches.

Southampton will face another Premier League side, Wolves, in the next round.

With their next opponents enduring a poor run in the league and having struggled in their 1-0 win at non-league Chorleyon Friday, the 1976 winners will fancy their chances of progressing further at Molineux.

The Saints also went close through Che Adams, whose low, angled strike was saved brilliantly by Bernd Leno, and James Ward-Prowse, who saw his delivery from a corner come off the bar.

In the second half, substitute striker Shane Long fell under a challenge in the box, but penalty appeals were waved away by referee Peter Bankes.

Arsenal were without forward Pierre-Emerick Aubameyang and midfielder Emile Smith Rowe, while another in-form player, Bukayo Saka, was only introduced in the second half.

Mikel Arteta’s Gunners side were tepid as an attacking force during the first 45 minutes, but looked more of a threat after the break.

However, Eddie Nketiah’s deflected shot in the 67th minute, which was superbly dealt with by home goalkeeper Fraser Forster, was their only effort of note.

Speaking to BT Sports after the match, Arsenal Manager, Mikel Arteta, said “We’re really sad to be out of the competition.

“We had issues in the first half and unforced errors as a result of the high press they do.

On whether Aubameyang, missing because of personal reasons, will be available for Tuesday’s league match against Southampton: “I don’t know. He needs to address that issue, we’ll see how it evolves. We’re here and we have to support him – he needs to take the time that is needed because that is a priority at the moment.”